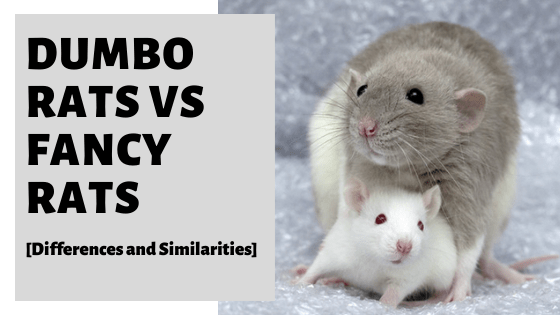 Dumbo Rats and Fancy Rats are the two main types of domestic rats that you will come across when looking to buy a pet rat. But how are they different from each other? Should you get a Dumbo Rat or a Fancy Rat? Here are some things you need to know.

So, what is the difference between Dumbo rats vs Fancy Rats? Both the Dumbo and Fancy Rat are varieties and descendants of the Norway Rat. As a result, they are very similar to each other in terms of personality, temperament, average lifespan, and care requirements. The main difference is their physical appearance – primarily the size of the head and the shape of the ears.

You can probably guess what variety has the larger ears!

And for those of you unfamiliar with the reference, it is the Dumbo rat.

Of course, it is!

But in reality, these rats are very similar. And it’s because of how they have been bred and their lineage.

This close association has led to the National Fancy Rat Society considering them the same variety of rat.

But you just need to think of it like breeds of dogs.

And as with all breeds; there are subtle differences between them.

Differences that have been purposefully bred in.

So, let us now explore those (and of course the similarities too) in much further detail!

Whats The Difference Between A Dumbo Rat And A Fancy Rat?

According to the American Fancy Rat and Mouse Association (AFRMA), Dumbo Rats first appeared in 1991 in North America.

It is thought that their unusual appearance originated as a result of a spontaneous mutation and is actually considered a deformation or defect.

The breeder then bred this one rat with his other more “normal” rats to enhance this mutation and so the Dumbo Rat was born.

Fancy Rats, on the other hand, have been around since the 18th Century in Europe, where they were made to fight each other for entertainment.

In terms of personality and character, Dumbo Rats and Fancy Rats share a lot of the same characteristics.

Both are intelligent extroverts who love interacting with other rats as well as their human parents.

A lot of owners say that their Dumbo Rats are calmer and more loving than Fancy Rats. But this is mostly anecdotal.

Putting their obvious physical differences aside, there is not much to choose between them.

Dumbo and Fancy rats share a very similar expected lifespan – being between 18-36 months, on average.

Of course, the exact amount of time a rat will live will have a lot to do with their particular genetics and bloodline and the life in which they lead.

In captivity, life expectancy has a lot to do with how they are cared for and raised.

So, lifespan really is a combination of nature and nurture – both contribute to one another.

There are then external factors to consider too, such as environment, how quickly health issues are treated if they are to arise, etc.

On average, both the adult Dumbo Rat and Fancy Rat are generally around the same size. That is regarding their weight, body, and tail lengths. The heads are ears, however, are quite different.

Let us now see how.

Adult Fancy Rats are on average between 9 and 11 inches long.

Both males and females have a tail that is between 7 and 9 inches long.

As with most animals, the males are usually slightly bigger than the females.

Adult males usually weigh between 450 and 650 grams whereas the females’ weight is between 350 and 450 grams.

Read more: How Big Do Fancy Rats Get?

Their size is also very similar, with a tail between 7 and 9 inches and a body of 9 to 11 inches.

You do get a dwarf Dumbo Rat, which when fully grown only weighs approximately 300 grams.

Read more: How Big Do Dumbo Rats Get?

You must bear in mind that every rat is different, and its size depends on a number of factors like diet, environment, and genetics.

Informal studies have been done on both Dumbo Rats and Fancy Rats, measuring their skull’s length, width and height in order to determine the exact differences in size.

The head was used as a standard to differentiate between the two as this is where the main difference between Dumbo Rats and Standard Rats lies.

The results showed that the skull of Fancy Rats is slightly longer than that of a Dumbo Rat, while the Dumbo Rat wins in terms of width.

The length/height ratio was seen to be fairly consistent between Dumbo Rats and Fancy Rats.

For example, the study showed that a Fancy Rats head has a length of 56mm, a width of 32mm, and height of 30mm.

As a side note, interestingly enough there seems to be a human disorder that is similar to the mutation that created the Dumbo Rat, called Nager Syndrome.

Should I Get A Fancy Rat Or A Dumbo Rat?

Whether you get a Fancy or Dumbo rat is going to be a matter of preference. In reality, ownership of these two varieties is relatively similar.

However, if someone in your home is wary about getting a pet rat, the physical distinctions discussed above can become important.

Fancy Rats look very similar to street rats, which can be quite offputting for some.

For this reason, a Dumbo rat may be more ideal; it could be argued that they are a little cuter, after all.

From a behavioral perspective, Fancy Rats can be just as docile and calm as Dumbo Rats; however, this trait is more common in Dumbo Rats.

And it goes both ways – you may come across an individual Dumbo Rat that is more aggressive or energetic than a Fancy Rat.

Remember that just like with other pets, how you raise them has a big impact on how they behave.

With lots of time, love, and care their temperament will be far more pleasant than if your pet rat is neglected or abused.

Giving your pet rat a lot of attention and care from day 1 will ensure that your pet rat, whether you decide to get a Dumbo Rat or a Fancy Rat, will have that wonderful sparkling personality that you are looking for.

In terms of health and care, there are also a lot of similarities for both breeds.

Rats in general are very healthy and have strong immune systems.

But, unfortunately – both Dumbo Rats and Fancy Rats can suffer from respiratory problems and females that are not spayed can be prone to mammary tumors.

Upbringing is so important, as giving them a loving home and gentle care will bring out the best in either a Fancy Rat or a Dumbo Rat, irrespective of which you eventually decide to adopt.

Can Fancy Rats And Dumbo Rats Live Together?

Absolutely, as long as both rats have been bred in captivity. It is always best to have a pair of rats so they can keep each other company and stay entertained. If you buy your pet rat from a breeder (be it a Fancy Rat or a Dumbo Rat), most will suggest that you take two rats from the same litter.

This is best for two reasons: it ensures that your rats will get on with each other and that they will have always have companionship.

If you want to introduce older rats to each other, then you need to research ways to safely introduce them.

When they are adults, some rats can be wary of others, so you need to introduce them carefully.

Don’t just drop a new rat into your pet rat’s cage before introducing them properly.

There are a number of techniques that can be used and introductions between Fancy Rats and Dumbo Rats rely on a little bit of trial and error.

If one technique is not working, you keep trying until you find an approach that suits your individual rats’ personalities.

Introducing 2 adult males is the most difficult of all.

In this situation, it is essential that proper introduction procedures are followed.

Adult males are more territorial when faced with another adult male.

Without correct introduction, adult males will end up living alone and traumatized.

Even if you introduce them properly, adult rats will usually have to establish a hierarchy before they settle down and become friends.

As such they may fight a little initially.

This has nothing to do with the difference between Dumbo Rats and Fancy rats, however, as everything discussed so far applies to both varieties.

It’s generally not a good idea to introduce baby rats to adult rats.

Some female rats are quire dominant and if they are not used to companionship can be quite aggressive.

They may attack the baby and injure it, traumatize it or even kill it.

Look at your rats’ personalities – if they are adults and do not show much aggression towards your new rat then you may be able to introduce them immediately.

Although it may take a little bit of effort on your part, it is still a very good idea to keep more than one rat whenever possible.

Safety is the most important consideration when introducing 2 rats.

Ultimately you want to provide them with companionship, not create a stressful environment or traumatize your pets.

Dumbo Rats and Fancy Rats are very similar in terms of their health and care needs as well as personalities.

So, what you decide to get is going to come down to two main things; availability and preference!

And the good news is, irrespective of whether you prefer a Dumbo Rat or Fancy Rat, you can count on having the same loving pet.