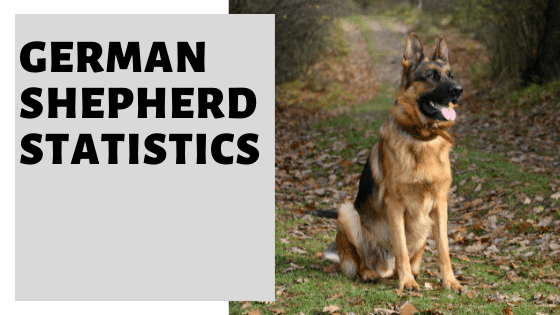 German Shepherds are intelligent working dogs and popular family pets and companions. Owned and recognized globally, these dogs (most often found in black and tan) can thrive at anything in which they are trained to do.

Loyal and obedient, courageous and confident; while alert and watchful in temperament.

Given how emblematic they are as a dog breed, I decided to pull together some fascinating and insightful German Shepherd statistics.

#2 The German Shepherd is the third most popular registered dog breed in the US, by rank, and has been in the top 10 list for the last two decades.

Due to their traits and innate abilities, German Shepherds are commonly still worked; as herders, guard dogs, guide dogs, and as search and rescue dogs. They are also used in the police and military service and for competitive obedience.

In the family setting, German Shepherds are loyal companions suiting active families who can dedicate the time to regular exercise every day. They are particularly good for experienced dog owners although they are child-friendly when properly socialized and trained.

#7 The average lifetime cost of German Shepherd dog ownership is $54,000. (This has been derived by combining the predicted lifetime costs of a large of breed from both Time and Forbes)

#8 The average monthly cost of Pet Insurance for a German Shepherd was between $45-$75 per month in 2021, depending on the insurance provider.

#9 The average accident and illness premium for a German Shepherd was around $600 a year in 2021.

German Shepherds are considered a large breed. Well-proportioned, they have a wide head, a sharp muzzle, and large and erect ears.

They are a muscular dog with bushy tail that curves down.

#13 German Shepherds were officially recognized in 1908, by the AKC (American Kernal Club).

#14 The average adult German Shepherd will eat between 2.5 to 3.5 cups of dry food per day.

#15 The average adult German Shepherd will require a minimum of 90 minutes of exercise per day.

#16 German Shepherds possess a coat with two layers: a top layer often referred to as the guard coat/topcoat. This is wirier. The second layer or undercoat is softer and lightly colored.

#19 The German Shepherd breed is ranked third in the most fatal dog attacks since 2016. However, their fatality statistics are generally a result of them trying to help humans than harm them.

#21 Since 1982, German Shepherds (and mixes) have been deemed responsible for 179 attacks that caused bodily harm in the US.

German Shepherds can be dangerous dogs as they do have protective and territorial instincts. While they were initially bred to work and not for aggression, they do have aggressive tendencies that must be closely managed and controlled.

With the right and with sufficient training and socialization, a German Shepherd can be raised to be a loving and affectionate pet.

Hopefully, these statistics help to give some insight into the German Shepherd breed.

While they are popular dogs to own, due to their propensity to be aggressive, correct socialization and training is an essential aspect of care that simply must be in place.

Like this? Looking for other dog statistics? Then check out my following guides below: