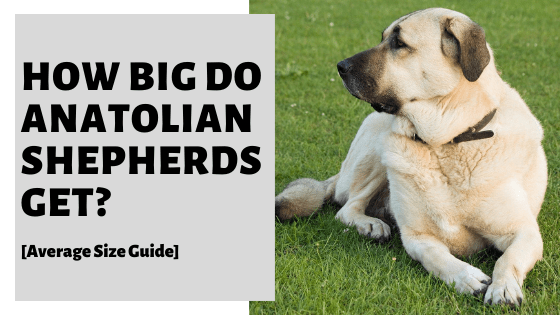 The Anatolian Shepherd is a historic breed of working heritage, primarily bred to guard and protect livestock. With such a physical and demanding job, the question naturally follows – how big do they get? What kind of size can an owner expect them to grow to? Here is what you need to know.

So, how big do Anatolian Shepherds get? Anatolian Shepherds typically reach 27-31″ (71-81 cm) in height and weigh between 90-141 lbs (41-64 kg), on average, when fully grown. They generally reach their final size between the ages of 14-19 months, depending on how big they get. On average, males are usually taller by 1-2 inches and heavier by 15-20 pounds.

Otherwise known as the Karabash (not to be confused, they are the same), the Anatolian Shepherd is undoubtedly a huge dog.

Besides, their work required a significant deterrent.

A guard dog by nature; they are naturally independent, bold, and stubborn.

But they are equally incredibly loyal – particularly with those around them.

As such, they can make a great family dog. But this is certainly not a dog for everyone and every family.

Their size alone, added to their possessive instincts, will require a firm and confident owner; keen to put in the time and effort to train and socialize this dog consistently from a young age.

Let us now take a closer look at the average Anatolian Shepherd’s size in further detail, covering their growth rate and what this all means for potential owners.

The Anatolian Shepherd is is a very large breed, often described as a ‘giant’. Although, not every dog of the breed is the same, and there is some variance among the sexes:

As you can see, dogs of this breed can differ by quite some size.

Nevertheless, they all share the same physique and build.

They are athletic, powerful, and bold, possessing a decent amount of muscle mass while being equally nimble on their feet.

This is not your typical ‘shepherd’ dog.

They can get almost twice as big as your average Australian Shepherd, for instance.

And it all boils down to their respective heritages.

Guarding and protecting livestock has very different requirements to herding them!

As such, the Anatolian Shepherd is certainly intimidating in size and stature.

Regarding the rest of their appearance, they possess a short, fawn coat that can come in a range of different colors and patterns, although cream is the most commonly seen and found.

They have a mastiff-like face, long tail, and medium-sized ears that droop down each side of the face.

At What Age Is An Anatolian Shepherd Full Grown?

Below we will look at the respective growth rates of male and female Anatolian Shepherd from puppy to maturity.

Growth Of A Male Anatolian Shepherd

Growth Of A Female Anatolian Shepherd

As the data shows, there is quite a bit of difference from the low to the high average – even among those of the same gender.

For instance, one male Anatolian Shepherd could be 31 pounds lighter compared to a larger dog of the breed.

For such a formidable dog, they undoubtedly need space. A small apartment will not suffice.

Instead, this dog needs to be kept in a spacious home. This is very important for their health and wellbeing.

So, you need to ensure that you can provide plenty of room, both indoors and outdoors, if you are looking to keep one.

A large, fenced, and enclosed yard that you can let your Anatolian Shepherd out in is strongly advised.

Generally, the more space you can afford them, the better. They can grow up to 140 pounds and 31″ in height, after all.

For reference, that is 2.5 feet – so almost up to the waist of the average human.

And carrying such mass, while being muscular and agile too; they have the potential to cause a lot of damage to, and in, a home.

Then another consideration would be traveling.

This is not a breed that is going to fit easily in every car.

You will likely need a large car, a 4×4, or one that affords sufficient space for this kind of breed.

A car that provides sufficient height is a must, especially if you intend to do any regular traveling.

Keeping them safe during any such journey is another topic altogether, and one for another time.

Just consider that traveling with this breed will be much more comfortable when they are young.

Other Size Considerations For Owners

The Anatolian Shepherd is a challenging dog to raise. Not only due to their size, but due to the temperament too.

This breed is not often recommended to new dog owners; they are relatively independent and stubborn, after all.

Not the kind of behavior you want, or can accept, at their size.

So, if you intend on getting one of these dogs, you will need to be firm and consistent with training.

Experience or knowledge with handling more challenging dogs will also serve you well.

As will, a bit of strength, as you will need to handle them should the need arise.

Thankfully, with sufficient training and socialization from a young age (preferably puppyhood), the Anatolian Shepherd can be a friendly and loyal companion.

They will naturally look to protect and care for those they consider ‘in the flock.’ This will include the humans in their family.

While they are known for being generally good and well behaved around children – they are not recommended for families with very young children.

They can easily knock them over or intimidate them during play, even if entirely unintentional.

At the same time, families with other pets need to re-consider, as they have a high prey drive and may even chase them if not trained not to.

If you are still confident you can look after and raise this dog, socialization and behavior training will become a priority.

It is entirely worth it but does take some dedication.

And, as a large shedding breed, they’ll be plenty of fur to clean up along the way too!

For such a large working dog, you may be wondering what the exercise requirements and dietary needs of the breed are like.

So, let us know quickly cover those.

Anatolian Shepherds should be fed per their age, weight, build, and activity.

Therefore, a young Anatolian Shepherd pup will eat in a drastically different way to that of an aging adult.

For this particular breed, they will need to eat a lot of food.

At least, compared to other dogs.

The general recommendations are as follows:

Of course, this is just a starting point.

If they are more active, then they may need more food than this.

If they are a larger dog, they may need more than this too.

Consider that your dog will not eat the same amount of food year after year.

It will need to change accordingly.

Either way, it is essential not to overfeed this dog.

And high-quality food is simply a must.

This dog can suffer from obesity and bloat, so you need to be particularly careful with the foods you offer, treats, and serving sizes.

Anatolian Shepherds have a moderate need for exercise. In relation to their size, they do not require a huge amount of activity.

But, they do need to be sufficiently exercised, too, for both the physical and mental benefits it provides.

The general recommendations are as follows:

As a ‘Shepherd’ breed, they are known to enjoy walking particularly.

But, it’s important to consider their age and be mindful while they are still growing.

Working up the exercise gradually comes advised, and only once your Anatolian Shepherd reaches their final size at 14-19 months should you look to increase the distance, time, and demands further still.

Anatolian Shepherds are very large dogs. They are muscular in build and nimble on their feet too.

So, a pre-requisite of ownership is space. It’s only fair to the dog, and it will be beneficial to everyone in the household.

And due to their guardian instincts and protective nature, they certainly possess a stubborn and somewhat independent streak.

They are certainly, not the easiest of dogs to own.

And as such, this particular breed is best for the more experienced dog owners.

One with knowledge, understanding, and appreciation of what it takes to be firm and to take the lead.

In the right way, of course.

But do not let all of this put you off.

When they are sufficiently trained and well socialized, they do tend to make a fantastic loyal companion.

They are intelligent, patient, calm, and loving, all desirable traits in any breed!