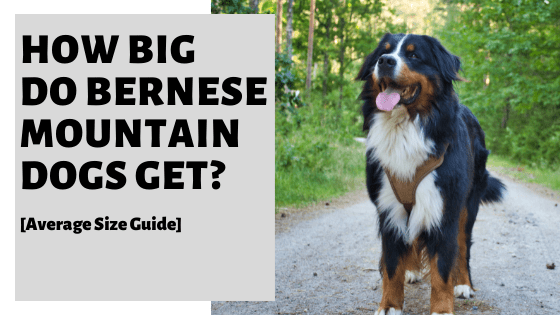 I think it’s fair to say that size is one of the primary considerations before getting any dog. Besides, you need to ensure you have the space to accommodate them. If you are looking at the Bernese Mountain Dog specifically, you need to be particularly mindful. Chances are you know they are large dogs already, but how large exactly, and what does this mean for ownership? Well, here is all the size information you are going to need to know.

So, how big do Bernese Mountain dogs get? Bernese Mountain Dogs are considered a large dog breed. They typically measure between 23-28″ in height and weigh between 70-110 lbs. Males are generally larger than females and tend to gravitate toward the upper end of the range.

No real surprise that they have a working history and have been used to herd cattle pull carts and to serve as intimidating watchdogs.

But this breed is also known for its affectionate and gentle nature and temperament too; making them ideal family dogs and companions.

If you can handle and accommodate their size.

So let us continue to explore!

What Is The Average Size Of A Bernese Mountain Dog?

An average-sized Bernese Mountain dog stands 22-27 inches tall, from head to the ground. Their average length is around 35-41 inches, with their weight coming in from 70 to 110 lbs.

The average size of a Bernese Mountain dog will depend on the sex of the dog.

Female dogs are usually smaller than males, regardless of the breed.

A female will usually stand a couple of inches shorter than a male (23-26 inches).

Being aware of the average size of a Bernese Mountain dog (also known as Berner) is key when deciding if your house and lifestyle would suit owning such a lovable, gentle giant.

Seeing as it’s an average, there are some that are smaller or larger than what’s mentioned.

If it’s possible, get as much history of your Berner puppy before bringing them home to get an idea of what you’re in for.

At What Age Is A Bernese Mountain Dog Fully Grown?

Most of a Bernese Mountain dog’s growth, in terms of height and weight, is complete by the age of 12 months. But it can take up to 2 years before they’ve filled out their chest properly.

As is the case with most breeds, males tend to be heavier and taller than their female counterparts.

The following chart is a guideline of the average growth of your Berner.

As you can see, there is a good range of weight numbers at each age.

If they are a little under or over the listed amounts, this is okay as each dog is unique in its growth rate.

However, if there’s a significant difference between the chart and your Bernese’s weight, it’s time to consult with your vet to see what could be going on.

That being said, so long as your Bernese Mountain dog is within this range, you can be safe in the knowledge that they are growing well and healthily.

If your puppy is significantly over or under the estimated weight for their age, it’s worth visiting your vet to make sure there’s nothing sinister going on.

Is A Bernese Mountain Dog A Large Or Giant Breed?

Bernese Mountain dogs are a large breed along with Labradors and German Shepherds. They don’t quite fit the giant class of breeds such as Great Danes and Irish Wolfhounds.

Even though some people use the terms’ large’ and ‘giant’ interchangeably, there is a difference when describing breeds.

A breed is classified as a giant when its adult dogs weigh well over 100 lbs.

Although Bernese Mountain dogs (particularly males) can sit around the 100 lb. mark, this is their maximum range.

This puts them on the higher end of large dog breeds.

Other large breeds include Anatolian Shepherds and Rottweilers, whose adults weigh in 90-141 lbs. and 75-110 lbs. respectively.

For instance, a fully grown Leonberger (classed as a giant breed) can weigh between 120 and 170 lbs. And an Irish Wolfhound adult dog weighs in from 120 to 155 lbs.

These weight ranges put these two dog breeds into the giant breed category.

Bernese Mountain dogs are a large working breed who were bred to help with multiple things in the Swiss Alps.

Some were responsible for dragging carts across mountainous areas, and this is where their largeness and strength came into play.

How Much Space Do You Need for A Bernese Mountain Dog?

Because Bernese Mountain dogs are a large breed from working ancestors, it makes sense that they’d need (or have regular access to) big spaces, so they get the exercise and stimulus they need. Berners are notorious for shadowing their owner, so plenty of indoor space is needed too.

Bernese Mountain dogs have fun, boisterous personalities that carry through into adulthood.

So, this energy needs to be expelled to keep them happy and healthy.

The simplest way to help keep them active, even if you don’t have the energy, is to play games with them in your yard/garden.

Bernese Mountain dogs love humans and prefer to spend as much time with them as possible.

Playing games that keeps them engaged accomplishes satisfying their daily exercise need and improves the bonding between them and their owners.

Though, because of their nature, playing fetch may not last long with them.

When needed, bringing them for daily walks (roughly 30-60 minutes per day) is the perfect alternative if you don’t have the outdoor space to let them roam around.

This doesn’t have to be done in one go and can be broken up.

Each Bernese Mountain dog is individual, so their exercise needs will differ from another Berner. And where they are in their growth will factor as well.

Even though they are large and are classed as a working breed, Berners tend to prefer staying indoors with their owners than being outside, so having a spacious house is key.

Rarely do Bernese Mountain dogs like to play by themselves in a garden, so getting them the right amount of exercise for their needs can be difficult.

They want to spend their time with you.

If your Berner spends or will spend most of their time indoors, make sure the house is dog-proof.

Placing fragile items on higher shelves in case of accidental knocks from boisterous play is the best practice.

Bernese Mountain dogs were bred to work in snowy, mountainous conditions, so they have thick fur (double coated). This means they are prone to overheating in very hot conditions.

It’s important to provide them with the space they need indoors (or outdoors) where they can cool off when needed.

Many dog owners and experts find that crate training their puppies is the quickest and most effective training technique.

This is especially the case for potty training throughout the night and to providing a safe space for the dog to go if they’re stressed.

When it comes to Bernese Mountain dogs, it’s best to get a crate measuring 48 inches.

Although this might seem too big, particularly if you’ve only just brought a Berner puppy home, their adult self will thank you.

To solve the excess space as the puppy grows, you can get a moveable crate divider that you can adjust as they grow.

Make sure to leave enough space in their crate so they can comfortably lie down without having to touch the crate.

Is It Safe Having a Bernese Mountain Dog Around Children?

A Berner’s temperament is generally gentle and nurturing, along with plenty of patience. They can be great with children and are sometimes known as nanny dogs. But it’s important to supervise both when they interact with each other.

Because of their size, it’s understandable to be worried if Bernese Mountain dogs would suit being around children.

Due to their history of shepherding and cattle work, Berners are very gentle and have an abundance of patience.

With that being said, they still need to be watched when interacting with children.

It’s not uncommon for any gentle dog, regardless of breed, to suddenly strike out at a child.

Just like humans, dogs have their limits on how much they can be pushed with space invasion and patience.

For these reasons, it’s important to teach your child how to behave around a Berner. And to recognize the signs if they’re pushing their luck with the dog.

Even after this, continuing to supervise both as they play with each other will help prevent any accidents.

Considered to be a gentle giant, Bernese Mountain dogs are classed as a large breed.

Males and female Berners can reach up to 115 lbs. and 95 lbs., respectively.

Since they are from a working breed, Bernese Mountain dogs need plenty of space inside and outside to stay both physically and mentally stimulated.

Although they make great family pets, their space needs may not suit every household.

Interested in learning more about the breed? Then my other guides may be of interest: