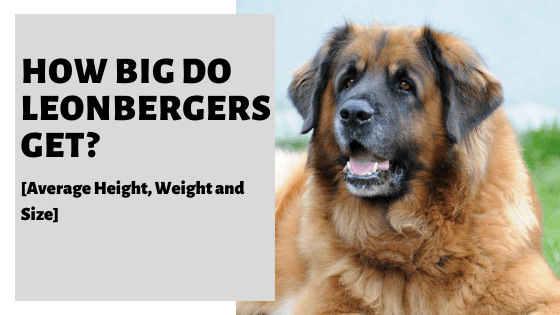 The magnificent golden-coated Leonberger is, without doubt, charming on the eye, often sporting a lion-like mane around the neck and chest. It comes as no surprise to learn that they were once bred for European royalty. But, how big do they typically get, and what does this all mean for potential owners. Here is what you need to know.

So, how big do Leonbergers get? Leonberger dogs typically reach 27-31″ (70-78cm) in height, weighing between 90-170 lbs. (40-77 kg) when fully grown. They typically reach their final size by 19 months of age, although larger dogs of the breed may stop at around 22 months. Males generally are much larger than females.

Leonbergers are certainly big dogs – a true sight to behold.

It comes as no surprise that the AKC (American Kernel Club) describes this breed as a “lush-coated giant.”

But despite their enormous size, they are known for being very gentle and patient in nature and make great companion dogs.

Perhaps we can rephrase them to ‘big-friendly giants’ or BFGs?

Nonetheless, this is a dog that can vary quite a lot in size. Not so much in height, but certainly in weight.

Leonbergers are often described as large and powerful dogs. In fact, they often rank highly in the largest dog breed lists, such as this one.

As you can see, there is quite a variance between males and females of the breed.

But even a smaller female is still a formidable dog.

And a closer look at these measurements and dimensions soon shows that these dogs weigh as much as, if not more than, the average full-grown human.

And this is by design.

A closer look into their lineage and their history provides interesting insight.

They are a working breed by nature, initially used as farm dogs pulling heavy and cumbersome carts.

And such strength, coupled with natural high energy, meant they served in both World Wars to transport heavy ammunition carts.

And are surprisingly good swimmers too.

It is no wonder that they are often kept as watchdogs and kept in a working capacity to this day.

But how could a dog be bred to such a size?

Well, the Leonberger is the result of crossbreeding three very large breeds:

And a closer look at the sizes of those breeds makes it entirely logical.

In terms of their frame, they possess a longer body than one that is tall.

And there is one further characteristic that adds to their sheer size.

The Leonberger has a water-resistant dense double coat that is either straight or wavy and medium-soft to rough in texture.

At What Age Is A Leonberger Full Grown?

The average Leonberger will reach their full adult size and frame by 18-22 months of age, depending on how large they ultimately become.

Naturally, the larger the Leonberger, the longer it takes for them to reach their final size.

For this reason, males often reach full-grown size maturity faster than the females of the breed.

Let us now take a closer look at what this growth looks like; starting from a the age of a young pup.

Growth Of A Male Leonberger

Growth Of A Female Leonberger

And this is just their physical size.

It’s important to remember that there are other aspects of maturity to consider, such as mentally and behaviorally.

Leonbergers are known to fully mentally mature at around 3 years of old.

So, if you do take on a Leonberger; consider that you’ll have a full sized dog that may not exhibit behaviors expected by your average adult dog.

Its also why early training and socialization is critical when owning this breed.

But more on that later.

How To Keep A Leonberger At A Healthy Weight

Any dog can suffer with obesity, and the Leonberger is no different. Excess weight can cause issues and reduce longevity in any breed, but it can prove even more challenging and problematic for a dog as naturally large as the Leonberger.

From cancer, diabetes, heart disease, and hypertension all the way through to osteoarthritis, joint deterioration, and pain.

So, it is vital to keep Leonberger at a healthy weight, in respective of their age.

The two most important factors at play here are diet and exercise.

Let us take a closer look at how much they should be eating and how much activity they need to remain fit and healthy.

How Much Should Leonbergers Eat?

Leonbergers should eat food in relation to their age and body weight.

They also need to be fed food suited to their age and be the highest quality you can afford.

It should be protein-rich and free from harmful additives and excessive grains.

Generally, younger Leonbergers should eat more food, spread over more meals. They are growing, after all.

Consider these are just averages, and a lot goes into the specific amounts each dog should be eating.

For instance, the amount of exercise, whether the dog is living inside or outside, or if you have multiple dogs.

These numbers should be used as a starting point, according to the age/weight, and may need to be adjusted depending on how the dog responds and their change in weight.

Generally, speaking to a vet or the manufacturer of each food is advisable.

How Much Exercise Does A Leonberger Need?

Again, activity should be age-dependent.

As adult dogs, Leonbergers require more than 2 hours of exercise daily (including structured exercise, like walks and general play).

Puppies, however, should not be over-exercised while they are still growing. Their bones and joints are susceptible to damage while they are forming and developing.

A good rule of thumb for walking a dog is to provide 5 minutes of walking per month of age.

So a 3-month-old Leonberger should begin with 15-minute walks.

The time should increase month by month and gradually until you work up to 1.5-2 hours per day.

Of course, some dogs will have a higher preference for exercise than others.

Taking on a dog of this size does take a little bit more planning and consideration.

For instance, traveling in a car is not going to be very easy. It may not be entirely possible, depending on the car you own.

At least for long.

Perhaps while they are a puppy, but you may soon notice that this becomes more of a challenge in time.

And then onto your home.

A Leonberger is certainly not the dog for you if you live in a cozy apartment.

They need sufficient space to live and to roam.

So, the bigger the size of your home, the better. Outdoor space is also, in many ways, essential.

And then there is one other crucial aspect to consider – their temperament.

Believe it or not, the Leonberger is a high-energy dog with a lot of enthusiasm.

And this energy needs to be carefully managed and controlled.

Besides, you do not want a 170-pound dog charging around.

So, if you take on this breed, you need to commit time, attention, and energy to train.

And it would be best if you did so with positive reinforcement techniques, setting your expectations and tolerances early on.

Early and extensive socialization with other dogs and people is also a must, especially before the age of 20 weeks old.

This is why group training and in a formalized setting is beneficial.

As you can imagine, a Leonberger will be much stronger and even outweigh you as an owner, so they must learn how to behave and follow commands.

Even the breed’s smaller dogs are larger than most other dogs you will commonly see in the park.

And this does have its implications.

They are not the easiest of dogs to care for and raise.

Big dogs require a lot of work, and they’re going to make a lot of mess too.

Besides, they have a thick double coat that will shed a lot too!

The Leonberger simply needs to be trained, disciplined, exercised, and kept busy.

The costs of food, insurance, and veterinary bills are other considerations too.

It is no real surprise that this breed is recommended to more experienced and seasoned dog owners.

They are definitely not the dog for everyone.

But do not let all of this put you off.

They are also regarded as being immensely friendly and gentle (despite their size).

They are great with their family, intelligent and affectionate, while equally protective.

So, if you are looking for a larger-than-life breed; and have the ability, time, and resources to get one, start contacting reputable breeders.

While they are a lot of work, this is perhaps one of the most rewarding and loving dogs you could adopt.