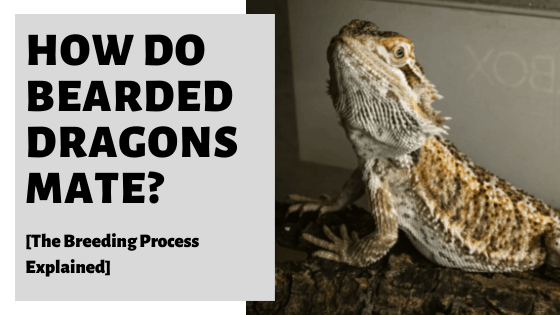 Bearded dragons are very different from more traditional pets like cats and dogs in many ways, not least in how they breed. While most people are familiar with mammalian breeding, how reptiles mate may seem very foreign to many. At least it was for me; until I spent some time researching everything involved with the mating process. Here is what you’ll want to know.

So, how do bearded dragons mate? Bearded dragons mate by the male mounting the female and biting her to hold her still. He will then insert his hemipene and fertilize any eggs she is carrying. The mating process only takes between 1-2 minutes, on average. Females can typically lay 4-6 clutches of eggs during a single breeding season – between spring and early summer.

Perhaps you have two bearded dragons of opposite sexes and wanted to produce baby beardies, or perhaps you were just curious as to how the reptilian breeding process works.

This article will go into depth about how beardies mate, how often, and some precautions that you should take.

Bearded dragons are described as being oviparous, meaning that they produce their offspring by means of laying eggs – like birds.

A female beardie will start to lay eggs once she reaches a large enough physical size, and this is typically between 8 and 18 months of age; at this point, she is known as being gravid (carrying eggs) and vitellogenic (fertile).

Females in the wild, and often in captivity too, usually mate and lay their eggs between spring and early summer – this is the mating season.

A female bearded dragon can lay eggs without having a mate around; however, if there is no male present during the breeding season, the eggs will remain infertile.

A male bearded dragon becomes sexually mature when they reach between 18 to 22 inches long; this is usually between 8-12 months of age.

Males are fertile all year round, with the exception of a short period in the late summer months.

Sexing a bearded dragon is easier said than done also.

In order to successfully mate a bearded dragon, you must, of course, ensure that you have two individuals of the opposite sex.

The fastest way to do this is by looking at an area of their anatomy known as hemipenal bulges. These are internal sex organs that are found on a bearded dragon’s underside near the base of their tail.

Males have two lumps at either side of their tail base, whereas females have a less well-defined singular lump above the cloacal opening.

How Do I Know If My Bearded Dragons Are Mating?

Bearded dragon mating behavior can look quite shocking and even violent at first. The male will start by bobbing his head up and down whilst he approaches and encircles the female. Often the male’s beard will appear a darker color than usual. The female may respond by waving her arm and bobbing her head. It is at this point that both beardies are mutually ready to mate.

The male will then mount the female and will bite the back of her shoulder or neck to hold her still.

This is generally well tolerated by the female, although on occasion, the male might tear the female’s skin.

Once the pairs cloacae are close together, the male will insert one or both of his hemipene (sex organs) into the female’s cloaca.

The sperm is then released to fertilize the eggs, followed by the female raising her head to signal that mating has finished.

The female bearded dragon can store sperm inside of her throughout the breeding season.

This means that she can give release multiple fertile clutches of eggs even if she has only been mated once.

How Long Does It Take For Bearded Dragons To Mate?

Bearded dragon mating is almost too easy – once two sexually mature adults are placed in the same enclosure together, it won’t take long for them to begin mating.

The act of mating itself only usually lasts for a few minutes.

Keep the pair together for about another week just in case mating was unsuccessful, then place them in separate cages; it is never a good idea to leave a male and female together as it’s likely the male will seriously harm the female over time.

You can put the pair back together if you think that mating has been unsuccessful but be sure to never leave them together for longer than a week.

When Do Barded Dragons Mate?

Bearded dragons naturally have a mating season between spring and early summer. In their native environment, they would awaken from a period of brumation to mate in the spring months.

Brumation is the reptilian version of hibernation; In captivity, some bearded dragons will brumate, and others will not.

While bearded dragons in captivity may be able to mate all year round, you should still try to emulate their natural cycle as closely as possible – allowing bearded dragons to undergo brumation will increase their fertility.

That means only allowing a male and female to cohabit the same enclosure during the mating season.

As mentioned above, bearded dragons must reach sexual maturity before they can mate.

This is because, before this point, their sexual organs won’t have developed enough, and they are unlikely to be fertile.

While males and females can both be sexually mature as early as 8 months of age, this isn’t necessarily the optimal time for breeding.

To ensure both mates are fully sexually mature and fertile, the male should be at least 18 months old and the female 24 months old.

After 3 or 4 years of age, a female beardie’s fertility will begin to drop off.

How Often Do Bearded Dragons Mate?

A sexually mature and healthy female beardie should lay between 4-6 clutches of eggs each year. The maximum clutch production can be achieved if the female is living in the proper stress-free conditions, has a balanced diet, and is provided with calcium supplementation.

Sexually active bearded dragons that are kept in the same enclosure may only mate once or may mate multiple times until fertilization has taken place.

This will increase the chances of a successful encounter without risking harm to the female.

A female will usually lay her eggs 4-6 weeks after a successful mating.

Eggs can hatch anywhere between 50-100 days or even longer after they are laid.

Females can have multiple clutches of fertile eggs from a single mating; this is because she is able to store sperm inside of her, ready for her next clutch.

Usually, one mating will be enough to fertilize two clutches, but it is possible for three or four clutches to be fertilized from one mating.

How Do You Know When A Mating Is Successful?

You won’t know a mating is successful until the female starts to gain weight; a pregnant beardie is known as being ‘gravid.’

Over time the female may go off her food as the space taken up by her eggs within her abdomen compresses the stomach.

You may also notice marble-like protrusions sticking out of the side of her abdomen – these are the eggs. Females will often become unsettled, restless and may dig a hollow in the bottom of the vivarium in which to lay their eggs.

While the act of mating between two bearded dragons is fairly simple and fast, the emphasis is put on timings and ensuring that both individuals are fertile.

Mating in bearded dragons is certainly interesting; the process is ultimately a manifestation of what works for this species.

And whether you intend to breed your beardies or not, it’s essential that you fully understand how and when it can happen.

But with the right knowledge and preparation, you’ll be soon on your way to a healthy group of baby bearded dragons!

How Do You Know If Your Bearded Dragon Wants To Mate?

You will know when your bearded dragons want to and are ready to mate by their behavior. Males will tend to be more aggressive, dominant, and possessive; their beards will even darken. Females will be very keen to dig, quite erratic in their actions, and will likely be gaining a lot of weight.

How Long After Mating Does A Bearded Dragon Lay Eggs?

A female bearded dragon will begin egg-laying between 4 to 6 weeks after a successful mating. Although females can continue to lay eggs for weeks beyond this too if they are storing eggs fertilized from the same mating session.

While thoroughly researched, the content on Pet Educate does not constitute, nor should replace, any pet medical advice.

Please consult a licensed veterinarian for any medical advice pertaining to your pet.