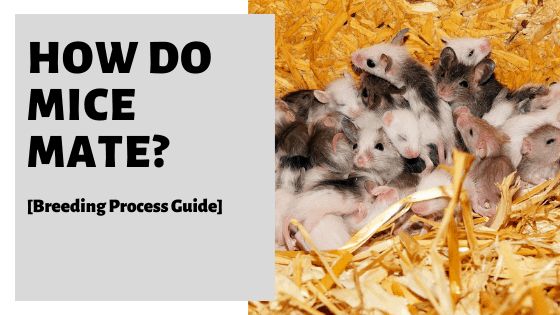 Wondering how mice mate? Seeking further information about the process – from when and how they do it all the way through to signs it is happening or has happened? You’ve come to the right place. Without further ado, let’s get started.

So, how do mice mate? Mice mate when the male mounts the female and inserts his penis into her vagina. Sperm is released, which then goes on to fertilize the female’s eggs. Mice typically mate between 5-10 times per year, if given the opportunity, and once the mice have reached sexual maturity (6-8 weeks). Mating typically occurs at night.

Knowing how mice breed is crucial if you are going to become involved in one of life’s great miracles.

Ensuring that the male, female, and pups are healthy is paramount; mice can multiply very fast to produce an almost unmanageable number of offspring if the process is not carefully monitored and controlled.

There are many reasons why you might want to breed mice.

Perhaps you are just a proud mouse owner and wish to have more, or you may be looking to breed mice for use in a laboratory environment.

Alternatively, you could be here for quite the opposite reason.

You may even have a mice infestation and want to understand how mice breed so that you can stop them!

Either way, you must be well informed before you get involved in the process.

So let us now explore mating in these small, pointed snout and small rounded ear rodents in greater detail.

Besides, this could make for some very important reading depending on your circumstances and/or goals!

How Long Does It Take For Mice To Mate?

Females are only receptive to the male when they are in estrous or heat – this is the time window in which a female mouse is fertile and in which breeding will be successful.

The estrous cycle typically lasts 4-5 days, and the female can only become pregnant when she ovulates her eggs.

Most females will ovulate their eggs and come into heat for about 15 hours every 4-5 days.

Signs of heat in a female mouse include their vaginal opening becoming pink, enlarged, and wet.

When the female is in this stage of the cycle, a male won’t hesitate to mate with her and will usually do so within a matter of minutes of placing them together.

Mating will typically occur at night-time, so be sure to turn the lights off as not to interfere with the natural day-night cycle.

Minimize any disturbances such as sounds, strong smells, or movement, as these will likely prevent the mice from feeling comfortable enough to breed.

Following copulation, a vaginal plug should form within the female’s vaginal opening.

This is formed from a mixture of sperm and mucous and indicates that mating has occurred – it doesn’t guarantee that the mating will result in offspring, however.

Just consider that mice can only mate once the male and female are sexually mature.

Both sexes usually become sexually mature at about 6 to 8 weeks of age, so you should be mindful about housing opposite sexes together after this point so that breeding doesn’t get out of control.

How Often Do Mice Mate?

Mice will breed very frequently if given a chance and can soon grow into an unmanageable population if left unchecked. Mice will mate at any opportunity – that means that once a female becomes pregnant and gives birth, she will be ready to mate again almost immediately.

A female mouse’s gestation period is between 19-21 days; this is the time from her eggs being fertilized to her giving birth to a litter of mouse pups.

A female mouse can therefore have another litter in as little as 20-25 days after giving birth to the previous litter.

At about two weeks into the pregnancy, fetuses can usually be felt within the female’s abdomen.

Females have up to 15 litters per year on average, and the number of pups in a litter can be anywhere between 10-12, although the average tends to be closer to 6-8 pups.

Parturition (the birthing process) lasts 1-3 hours and often occurs during the night.

Male mice do have a limited capacity to produce sperm, so there should be no more than two females per male in your mating enclosure.

Once mating has occurred, remove the males from the enclosure and house them individually to allow them to recover their sperm counts.

It can take anywhere between 2-4 days for a male’s sperm count to rejuvenate after a prior mating, so keep them separate for at least four days before introducing them back in with any more females.

If left to their own devices, a population of mice will interbreed, causing an exponential increase in the number of mice and increasing the chances of genetic malformations occurring.

Inbred mice will also tend to have smaller litter sizes than outbred ones.

If you want to breed your own mice, then you must control which mice mate together to try and avoid interbreeding as much as possible.

Mice will breed all year round, provided the climate is warm enough, and there are plenty of resources available.

In the wild, when conditions over the winter can be harsh, mice tend to do most of their breeding in the spring.

Do Mice Mate For Life?

Although mice can be monogamous, meaning that they stay with one partner for life, they are most often polygamous if given the opportunity.

Wild mice will mate with multiple females over their lifetime, which introduces variation into the gene pool.

Pet mice, if given the opportunity, will likely be polygamous, too, although this, of course, depends on how many individual males and females you want to breed.

Studies have shown, however, that some breeds of mice, such as the California mouse (Peromyscus californicus), do pair up for life.

While this is unusual in the rodent world, if you only have one pair of mice, then they shouldn’t have any problems with coupling up exclusively.

Do Mice Make Noises When Mating?

Mice do sometimes make noises when mating, and there are many reasons why they might vocalize, including expressing emotions, alert other mice to danger and during mating.

It has been thought that male mice, in particular, will let off sounds of pleasure in the form of ultrasonic sound waves in the frequency range of 25-120kHz when they mate with a female or encounter her pheromones.

These sounds are usually very high-pitched and can’t be heard by the human ear.

Different forms of stimulation can result in mice letting off different vocalizations.

Prior to sexual intercourse, for example, mice let off whistle noises, whereas when mounting the female, the male will let off chirp-like noises.

So, if you are looking to mate mice, or are aware that wild mice may be mating in your vicinity, you may be able to hear it!

Various factors will affect a mouse’s fertility and ability to breed, including age, nutrition, temperature, concurrent disease, and abnormal day-night cycles. Insufficient nesting materials or a lack of food or water can cause a pregnant female mouse to abort her offspring.

For some people, they may have a mouse infestation that they want to get rid of in their house, and they wish to reduce the rate at which mice may be breeding inside.

Limiting the supply of scraps of food and water around the house will limit the multiplication rate.

Of course, hiring exterminators is the best way to be rid of a serious mouse infestation.

Whatever your reason for breeding mice, you won’t have to interfere much for the process to be a success.

In fact, the issue often lies in making sure that breeding isn’t too successful, as you may end up with a very large number of mice.

It’s important to be responsible; provide plenty of space, bedding, and food for your mice and ensure that if you can’t handle a whole potential litter of 10+ pups that they have good homes to go to.

Mice can make for great pets: they are relatively easy to care for, they can be trained, and they will often form a bond with their owners over time.

So, it’s no surprise that many owners would want more of these little companions, especially if they have two mice of the opposite sex with the ability to breed.

However, breeding mice isn’t always a walk in the park, nor is it always desired.

As such, there are some important considerations to make before blindly allowing two individuals to breed – if that is the intention.

Hopefully, you now have a greater idea about the breeding process from reading this today.

But it shouldn’t stop here.

Do continue to research and look into various resources on the subject.

Become familiar with what to expect and how to manage each stage of the process.

Here are a couple of good resources to start:

Otherwise, it could all get out of control very fast.

And whether you own pets or have an infestation – this could pose a big problem.

You’ll be pleased you did.

Are you wondering how other animals mate? Then my following guides are a good place to start: