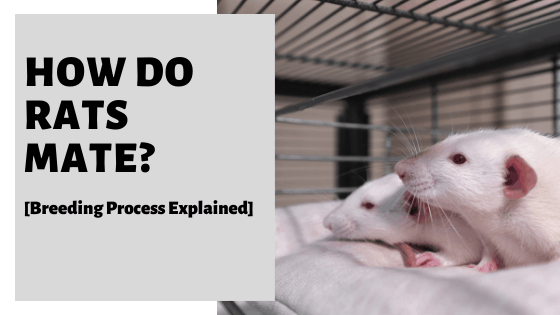 If you keep pet rats and are thinking of breeding from them, then it’s best to do so in a controlled and responsible manner. You’ll soon see why. This also means you must understand their reproductive processes and characteristics. But what are they, and what do you need to know? Let’s find out.

So, how do rats mate? Rats mate when the female is in heat and the male mounts her. This will likely happen when two sexually mature rats of the opposite sex are put together, and copulation typically lasts a few seconds. A few noises may be heard during mating. Rats often mate between 6-15 times per year and can have up to 14 pups each time.

Rats make great pets, and so there’s no surprise you might be wanting more.

But this is what you need to hear.

If left to their own devices, they would continue to breed to produce a large population that soon becomes out of control.

A female rat can produce up to 2000 offspring in just one year if the breeding process is left ungoverned.

So, this article will cover the basics of rat mating and reproduction and will prepare you for introducing some new rat pups into your family!

At What Age Do Rats Start Breeding?

Rats will only successfully reproduce if both the buck (male) and doe (female) have reached sexual maturity. Males are considered sexually mature at 6 to 10 weeks of age and females at 8 to 12 weeks of age.

If you keep baby rats together, they should be separated before they reach this point to prevent unwanted breeding.

How Do Rats Reproduce?

Rats don’t have a breeding season and so will mate all year round if given the chance.

A sexually mature pair of rats should only be placed together once the female comes into heat as they can harm each other otherwise, and any mating will be unsuccessful; a female is only fertile when she comes into heat.

The signs of heat are easy to identify once you know what to look out for – the vagina becomes enlarged and can appear darker in color, she will often arch her back when stroked, she might vibrate her ears, and may appear hyperactive as she darts around the enclosure.

A female rat will come into heat every 4-6 days on average; a doe’s heat cycles are usually regular and predictable.

While heat can occur any time of the day, it most often occurs during the nighttime hours.

Placing a male and female rat together for the evening in which the female is in heat will likely result in mating.

A buck will sniff around her and appear interested as the doe releases pheromones that tell the male she is in heat and ready to mate.

When the male mounts the female, he will bite her scruff to hold her in place.

The buck will insert his penis within the doe’s vagina and release his semen to complete the mating process – the buck usually mounts the female multiple times before copulation is complete.

How Long Are Rats Pregnant For?

The average gestation period for a pregnant rat is between 21-23 days, and she will usually appear visibly pregnant after 14 days – her abdomen may begin to expand, and her mammary glands appear enlarged.

The birthing process is usually over within a few hours as the female gives birth to a pup every 5-10 minutes.

The average litter size is between 6-13 pups.

Bucks can remain fertile into old age, whilst a female will enter menopause at about 18 months of age.

After this point, the females’ fertility diminishes; her cycles become less regular, and the number of pups in a litter decreases.

How Long Does It Take Rats To Mate?

Once two sexually mature rats are placed in the same enclosure, they will usually mate within a matter of minutes. The actual act of copulation can last only a few seconds.

The longest period it could take for a successful mating would be about six days if the female had only just come off her previous heat cycle.

In this situation, the male might still try to mount the female, but she won’t tolerate it until she comes into heat.

It’s important to work out the female’s heat cycles before placing the male into the enclosure. Otherwise, you risk the female being harmed, and any mating will be unsuccessful.

How Often Do Rats Mate?

Rats, if left to their own devices, will almost mate constantly when put together. If a female is placed with multiple males, then she can mate up to 500 times in a 6-hour period!

Of course, this isn’t recommended for the welfare of the rats.

The average number of times a pair of rats can successfully mate is between 6-15 times per year, depending on the species.

Do Rats Have Only One Mate?

This is because, in the wild, rats would mate with many different individuals in order to introduce as much genetic variation as possible into the gene pool.

A female rat can mate up to 500 times in a 6 hour period in the wild, and so as you can imagine, the potential for genetic variation is immense.

If you have multiple male rats that you wish to mate with a female, then only allow them to do so one at a time.

I.e., Allow the female to have one set of offspring from one male and then swap the male once she has given birth and is ready for her next mating.

Otherwise, placing multiple males in the enclosure with a female will only lead to competition, and it is likely that your rats will harm each other.

Do Rats Make Noise When They Mate?

Although rats are usually very quiet mammals, they are inclined to vocalize during mating. Male rats will typically make noises just prior to and during copulation, and it is thought that these vocalizations trigger mating behavior in the female.

However, the sounds a rat gives off are typically very high-pitched and even ultrasonic in some species such as Norway rats.

During copulation, the female will sometimes make vocalizations back. The frequency of the sounds produced is 50kHz – above that of human hearing.

After the mating process, the male may continue to make sounds of about 22kHz in frequency – a human ear may be able to pick up on these.

These vocalizations are thought to ward off other males from trying to mate with the same females.

The main factors that affect a rat’s fertility include age, nutrition, temperature, and daylight.

We have already touched on the fact that as females age, their fertility drops off, especially after the 18-month mark.

Malnutrition is a major factor in determining the success of a pregnancy – abortion will occur if the female does not have adequate energy input.

It is also important to ensure there is plenty of nesting material available for the pregnant female.

Hay, straw, or shredded paper are suitable materials that the doe can use to make a nest; nesting allows the female to feel her offspring will be secure.

Do Rats Have Any Problems Giving Birth?

Most rat births occur smoothly without any issues, but on some rare occasions, there may be problems.

Parturition, the birthing process, usually takes 1-2 hours in total, with the mother delivering a new pup every 5-10 minutes.

A doe older than six months giving birth for the first time may have some difficulty if the fetuses get stuck within the birth canal; if left unaided, then a mother in this situation may go into shock and die.

If caught soon enough, an emergency cesarean section can be performed to remove the obstructed fetus.

If no babies are delivered with the first two hours of birthing, then there is likely a problem.

As you can see, rat mating generally does require much input from owners – once two fertile rats are placed together, then nature will do the rest.

The main responsibility of a rat owner is to look after the welfare of their rats, particularly the female.

Spend some time observing your female until you know her heat cycle; that way, you can only place her with a male when necessary, and the chances of successful mating are maximized.

Are you wondering how other animals mate? Then my following guides are a good place to start: