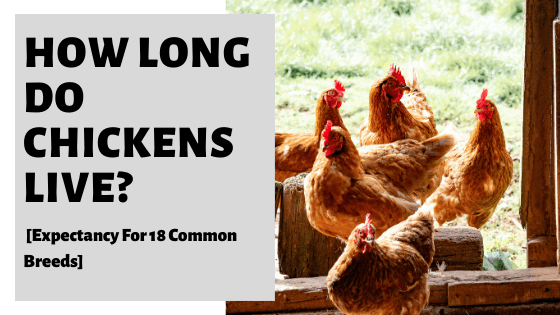 There is an almost endless list of different chicken breeds. You can soon see why. They can range quite dramatically in appearance, weight, size, and even temperament. Is it, therefore, logical that each breed will live to the same age?

You’ll often see blanket statements such as “chickens live for 5-10 years”, but the truth is, this is not true for every breed.

So below, I would like to run through 18 different yet commonly kept chicken breeds and outline the average life expectancy.

In the end, we will look at those crucial factors that can have a big impact on life expectancy, regardless of breed.

How Long Do Amberlink Chickens Live?

Amberlink chickens only live for 2-4 years on average. This is because they are a hybrid breed with a high egg production (laying year-round).

Hybrids are typically half the age for your average, pure-breed bird.

Near constant egg production puts a lot of stress on the body of an Amberlink. It means their bodies never obtain the rest they need, and they rapidly use up their mineral reserves, most notably in Calcium.

Depletion results in weakened immunity and puts the Amberlink at risk of early death through diseases and other ailments.

How Long Do Australorp Chickens Live?

How Long Do Ameraucana Chickens Live?

Ameraucana chickens generally live for 7-8 years, on average. They are quite a robust breed and are known to be very intelligent, particularly around predators.

They typically tend to outlive other breeds that may be kept in the flock.

Black Star chickens typically live between 6-10 years, which aligns with the average for chickens, in general.

How Long Do Barnevelder Chickens Live?

Barnevelder chickens generally live between 4-7 years, somewhat shorter than the average breed due to their more consistent egg production.

In fact, Barnevelder’s were initially developed to lay through the winter. Some strains are still efficient winter layers.

The more that a Barnevelder hen lays, the more susceptible they will be to succumbing to an earlier death.

How Long Do Bantam Chickens Live?

The average Bantam chicken will live between 4-8 years.

Although, there have been reports of a Bantam living to the age of 16 (she was kept as a pet, however).

How Long Do Brahma Chickens Live?

Brahma chickens generally live for between 5-8 years and are known for being a longer-lived breed.

How Long Do Cochin Chickens Live?

While quite a robust bird, they are known for contracting parasites such as mites due to their dense feathers. This can reduce life expectancy unless sufficiently treated.

This is typically longer than other hybrid breeds, partly due to the fact that they are not high egg producers.

How Long Do Hybrid Chickens Live?

Hybrid chickens typically live much shorter than your average pure-breed, 2-4 being the average life expectancy.

As various different breeds can produce a hybrid, however, there is some variation in total life expectancy. Reports of older than 5 are still rare.

Jersey Giant chickens typically live for 5-6 years. Their life expectancy is somewhat shorter than your average pure-breed chicken due to their larger size.

How Long Do Leghorn Chickens Live?

Leghorn chickens typically live for 4-6 years; this is generally much shorter than other breeds and partly because they are such productive egg layers.

How Long Do Pekin Chickens Live?

The average Pekin chicken will live between 5-7 years, although it has been reported that some chickens of this breed make it to 10-12.

How Long Do Polish Chickens Live?

Polish chickens should live between 5-10 years, the typical and expected age for most breeds of chicken.

Rhode Island Red chickens generally live for between 5-8 years, so long as they are kept in optimal conditions and sufficient nutrition and care.

How Long Do Silkie Chickens Live?

Silkie chickens are some of the longest-lived, living up to and beyond 7-9 years of age on average.

How Long Do Wyandotte Chickens Live?

Factors That Influence Lifespan Of Chickens

Each breed has its life expectancy. But even then, this assumes that the bird was well taken care of along the way.

So, let us now take a look at the individual factors that impact lifespan in these birds:

The lineage of a particular chicken can have an enormous impact on their life expectancy.

How they were bred, the chickens they were bred from, and how often all have an impact on lifespan – especially where interbreeding is concerned.

Its therefore essential that chickens are bred appropriately, where new stock unrelated to one another come together.

Of course, this factor is mostly out of the control of the general chicken keeper, so far as that is important to source your chickens wisely.

Research into the breeders and only purchase chickens from reputable sellers.

Chickens bred for the sole purpose of and who lay eggs consistently throughout the year typically do not live as long as they are afforded yearly rest.

Chickens need a high-quality and balanced diet to live a longer and healthy life.

While they were once raised on anything and everything they could find and was given, significant progress has been made in poultry nutrition.

As such, the majority of a chicken’s diet should come in the form of a premium feed formulated for their age.

For instance, a laying hen should be primarily subsiding on a layer feed with appropriate protein.

Pelleted feed is designed to meet the nutritional requirements of each bird. And it should be provided liberally where all birds of the flock can access and consume it.

Table scraps and treats do have their place, but they need to be carefully controlled and managed. Fruits and vegetables are also generally better options than starchy grains.

Simultaneously, some foods (including fruits and vegetables) can be highly toxic to these birds.

Before you feed anything to your chickens, you must do the research ahead of time.

And then there is also weight.

Chickens should be kept at a healthy weight and not overfeed.

Overweight chickens are vulnerable to health complications, including heart and respiratory issues.

Too much protein can also lead to kidney complications.

Thus, the diet needs to be a central focus of any keeper – sufficient yet controlled.

The more hygienic, clean, and safe the living conditions are for your birds, the healthier they should generally be.

Besides, it will also make them happier birds which has an impact on longevity too.

So, chickens must live in a calm, abundant, and stress-free environment.

The coop and run should be of sufficient size, and they should also be allowed to roam regularly and often.

Housing needs to be fully optimized too. It should be adequately ventilated, sufficiently warm and dry, and protective from predators and drafts.

Disease will naturally take its toll on lifespan.

Some can be prevented, whereas others are entirely out of the control of the keeper.

Nevertheless, specific measures and preventative strategies should be put in place to reduce any risk.

The leading causes of disease in a flock come through parasites.

Mites, lice, and worms being perhaps the most famous trio.

They can cause anemia, pain, feather damage, and even death if left unchecked.

Therefore, it is essential that a keeper dusts the coop and worms their hens regularly or upon detection of issues.

Continuing, how and when chickens receive treatment can dramatically impact the outcome.

Veterinarians who specialize in poultry will help keepers support and care for their particular breed. They will also provide medical intervention in the instance of an outbreak of disease.

Of course, the keeper still needs to remain vigilant of their flock and manually inspect frequently, but leveraging a vet’s knowledge and experience can go a long way to ensuring chickens reach their life expectancy.

Especially when swift action and attention is required.

While chickens as a whole may live between 5-10 years, this is not merely the case for every breed.

This is precisely why it is an average.

The truth is, some breeds do not live as long as others.

Equally, some are known for their longevity.

Either way, as a keeper, it’s essential to be aware of each breed’s average life expectancy to set expectations accordingly.

It’s also essential to become aware of and familiar with those factors that can impact longevity.

A keeper has a big responsibility and a lot to do to care for their flock.

But it’s worth it.

It may seem obvious, but it is the reality.