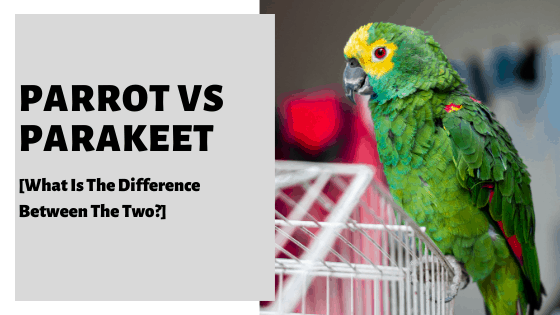 When looking at different species of birds, you will likely have come across the terms ‘parrot’ and ‘parakeet’. Sometimes they are even used interchangeably. But what is a parrot and parakeet exactly? Are they the same bird or are there any significant differences between the two? I spent some time researching to find out exactly how these two compare.

So, what is the difference between a parrot vs parakeet? Parrot is the term used to refer to a diverse group of several hundred species of colorful bird, whereas a parakeet is a small, singular and specific species of parrot. So, a parakeet is a parrot, but a parrot is not necessarily a parakeet. Therefore parrots can vary quite dramatically in terms of their characteristics, size, appearance and temperament. A parakeet on the other hand, will always looks, act and behave in a similar manner and according to the species standard.

If you are looking at getting a pet bird, then there are plenty of options to choose from and a lot to consider.

If you are merely starting your research, it makes sense to begin with parrots. That way you can venture out to find out what will be best for you.

Let us now take a closer look at precisely what makes parrots and parakeets different from one another, and how to easily tell them apart.

This way, you’ll be in good stead should you decide to take your considerations of ownership further.

What Is A Parrot?

Parrots are a diverse group of birds that are extremely popular as household pets because they are affectionate, intelligent, and amusing.

There are more than 350 different species of birds that are in the parrot family.

Some of the common ones you may have heard of include lovebirds, cockatiels, lorikeets, conures, cockatoos, macaws and then of course there is the parakeet.

They vary widely when it comes to color and size.

The smallest parrot is only 3 to 4 inches in size and is known as the Buff-faced Pygmy Parrot.

At the other end of the spectrum, the Hyacinth Macaw is the largest of the parrots, measuring roughly 40 inches in length!

Parrots live in a variety of different habitats in the wild, occupying everything from alpine mountains to hot and humid rainforests.

They are also vastly different when it comes to their nesting habits and what their diet consists of.

When it comes to the various orders of birds, parrots live the longest – sometimes even up to 95 years for kakapos!

When they are kept in captivity, fed a premium diet with added fruits and veggies, and taken care of accordingly, parrots quite commonly outlive their owners!

Most parrots have a strong desire to live in a social order, as part of a flock. This is part of the reason that parrots make such wonderful pets. They like having people around as company.

When they are cared for properly and given the training they need, they will even consider their humans to be members of their flock.

Many enjoy walking around on the shoulders of their owners, and because they are able to mimic sounds so successfully, it is also possible to teach them to talk!

What Is A Parakeet?

Parakeets, also widely known as budgies, are a species of bird within the parrot family. They are essentially just little parrots that are lively, adore food, and they can compete with any parrot when it comes to their ability to talk.

As the most popular pet bird in the world, this Australian native is now found in homes all over the globe.

Part of the reason for their popularity is the cost since they are relatively inexpensive to purchase and keep as pets.

Parakeets are extremely social birds, and they love nothing more than attention.

Although it takes work to train them, parakeets can enjoy being held, and they can also be taught to talk.

Parakeets are extremely amusing to watch as they go about their daily activities. They love to play with toys, climb up and down ladders, and receive treats from their human companions.

Like all species of parrots, parakeets are very curious, and they love to be able to see what is going on around them. They need to feel as if they are part of a flock.

While a solitary parakeet can do very well if they are given the proper amount of care and attention, it is always better to have two so that they are able to play together.

I personally have 4 parakeets in a huge aviary. They all play together but they also pair off when it comes time to go to sleep. I have 2 that are blue and 2 that are green. Strangely enough, they pair off by color group!

The lifespan of a parakeet can vary widely. They usually live somewhere in the range of 5 to 15 years, but the oldest parakeet on record lived for more than 20 years.

There is one primary factor that contributes to the lifespan of your parakeet. It is vital that they are fed a premium diet that is specially formulated for parakeets.

They also enjoy a variety of leafy greens, and adore fruit, both of which should be added into their diet to ensure they are getting the proper amount of nutrition.

Are Parrots And Parakeets The Same?

Parrots and parakeets are not the same bird, at least in theory. However, if you look at it scientifically, parakeets are parrots. It just does not work the other way round!

People often call parrots parakeets and vice versa so it can definitely lead to some confusion during conversations.

There are roughly 115 different species of parakeets and all of them are members of the parrot family.

This means that they scientifically, they are parrots.

They share many characteristics which also further clouds the issue but if you were to place a macaw (a species of parrot) beside a domesticated parakeet for example, you could easily see that they are not the same bird.

What Is The Difference Between A Parrot And A Parakeet?

There are tons of differences between parrots and parakeets, including everything from the origin of their name to their ability to talk!

Origins Of Their Names

Parrot is said to be derived from “perrot”, an old French word.

Interestingly enough, we use the word parrot as a verb because its literal meaning is to repeat automatically.

The word parakeet is said to have several different origins. It could have come from the Spanish word “periquito”, the Italian word “parrocchetto”, or even the French word “paroquet”.

Whichever version you choose to believe, they are all beautiful sounding!

Parrots and parakeets are also different when it comes to weight and length.

For length, parakeets grow to between 7 inches and almost 15 inches. Parrots can grow to a length of between 3 inches and 40 inches.

Parrots come in a wide variety of vivid colors. The most common colors that you will see are bright shades of red, green, blue, and yellow.

Wild parakeets are generally green in color, with yellow and black lines, but domestic breeding and genetic mutations over the years has allowed different colors to emerge, most notably shades of blue and white.

With that being said, you may also now see parakeets in almost every color of the rainbow.

Some of the more interesting colors that you may find are blue – mauve, albino (white with red eyes), and violet.

Another interesting difference between parrots and parakeets is that not all species of parrots are able to talk.

However, all species of parakeets can talk.

Sounds coming from some parrots can sound almost harsh, while the sound a parakeet makes it very musical sounding.

Male parakeets talk and sing much better than females, although females do have pretty voices. And when it comes to the parrots, the one with the best talking ability is the African Grey.

When it comes to breeding, the only difference between parrots and parakeets is the number of eggs that they lay.

Worth noting is that both parrots and parakeets can reach these ages in their natural environment as well because they have very few natural predators.

As long as they are able to find abundant sources of food and water, they have a very good chance of dying from old age.

How Can You Tell The Difference Between Parrots And Parakeets?

The easiest and clear difference between parrots and parakeets is usually their size and coloring. Although, some of the smaller parrot species look a lot more like parakeets than large and red macaws, for instance.

So, visually is not always a foolproof way to tell the difference.

It can be harder still when you look at the smaller species of parrot. Take for example the Buff-faced Pygmy Parrot, which is actually smaller than a parakeet is!

Additionally, both parrots and parakeets have feet with four toes and a hooked beak, although upon closer inspection, the beak is much more prominent in parrots.

So, what is the best way?

The best way to tell the difference between these two stunning creatures is to look at the tail feather.

It can be a difficult decision to choose between getting a parrot or a parakeet.

They are such fascinating birds and there are of course individual variances that you may prefer and that may appeal to you.

Either way, you will always be enchanted by their looks, the sounds that they make, the behaviors they exhibit and their desire to play a prominent part of your life.

Parrots and parakeets are both social birds, and they generally make fantastic pets.

So, the best thing you can do is to begin your research by looking at parrots as a broader species.

From there, look into the smaller subspecies, such as parakeets, and learn all you can about what it is like to keep them and what is required for their ongoing care.

Generally, larger parrots are a longer term commitment than smaller parrots such as the parakeet. Macaws for instance, live for between 30-50 years on average, compared to a parakeets expected 15-20.

There is definitely a lot to consider, and some nuisances outside of the obvious.

At the end of the day you want to find a parrot species that works for you, your home, and suits your preferences.