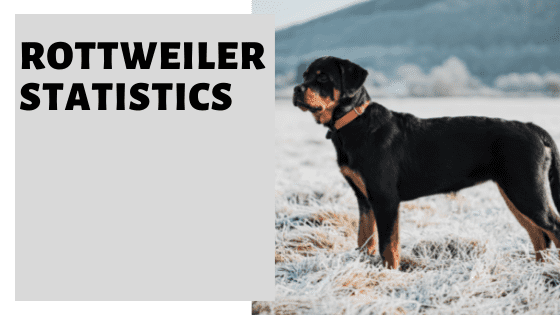 Rottweilers are a distinctive breed of dog. Possessing a short black coat with rust to mahogany color markings that appear across the face, body, and feet.

Originally a working dog, the large and powerful dogs are now often kept as family guards and companions; they are devoted, fearless, and alert in temperament, after all.

And in recognition of the breed, I decided to research and pull together some insightful and intriguing Rottweiler statistics.

#1 The Rottweiler is the eighth most popular dog breed in the US, by rank, according to the AKC (American Kernal Club).

#2 Rottweiler is now the most popular dog breed in Detroit, according to a study published by the American Kennel Club. They lead the French Bulldog (2nd), German Shepherd (3rd), Golden Retriever (4th), and Bulldog (5th).

Rottweilers are loyal, yet large dogs that are naturally protective of their people. They are suitable for families but do need a consistent training program, early socialization and should be kept busy.

They do best in a home with more experienced owners who can commit the time and resources to raise this dog.

They are considered relatively serious dogs, who are keen to watch people and the environment around them and rarely appear to ‘switch off’ and relax.

#4 The average cost to buy a Rottweiler puppy in the United States is $1500. Although, the range to buy this particular breed can range from $750-$10,000 depending on the breeder and the dog’s bloodlines.

#5 The average new Rottweiler owner will spend around $150-$350 per month to take care of their dog.

#8 The average monthly cost of Pet Insurance for a Rottweiler was around $35-$53 per month in 2021, depending on the provider.

Rottweilers are considered a medium-to-large breed. They have naturally muscular physiques and are thus strong and powerful. Despite their size and strength, these dogs are known for ‘leaning’ on their owners as a means of showing affection.

#12 Rottweilers have been used as therapy dogs. A Rottweiler known as Wynd won the Award for Canine Excellence in Therapy in 2015 having worked with The Tragedy Assistance Program for Survivors along with the Hampton Veterans Hospital.

#13 The average adult Rottweiler will require between 4-6 cups of dry dog food, per day.

#14 The average adult Rottweiler will require a minimum of 120 minutes (2 hours) of exercise per day.

#15 The average adult Rottweiler will sleep between 13 to 18 hours a day.

#16 Rottweilers have a smooth, dense double coat (a coat with two layers). This helps them regulate their body temperature and protect them from the harsh elements in which they were initially bred to work in.

#17 The Rottweiler coat can be found in a total of five different colors (including Red and Blue). However, only three of them are recognized by the AKC (Black and Mahogany, Black and Tan and Black and Rust)

#18 The average life span for a Rottweiler is between 8 – 10 years. This is one of the shortest living breeds.

#19 The Rottweiler is classified as the second most dangerous dog breed, after the Pitbull. They have been involved in 45 fatal attacks between 2005-2017. This equates to 10.4% of the total attacks in the period.

#20 According to dog bite research published in 2019, Rottweilers rank sixth when it comes to the likelihood of a dog bite injury to the face.

#21 In the UK, there have been 5 reports of fatal dog attacks involving Rottweilers since 1986.

#22 According to the FCI Standard, Rottweilers should have 42 teeth.

Hopefully, these Rottweiler statistics help to give you a better understanding of what this breed is like.

They are popular family guardians and companions and are still used as working dogs to this day.

While they do and can make for a great pet, it is essential that they are thoroughly trained and socialized from a young age.

They are also considered most suitable to more seasoned and experienced dog owners due to the fact that they are so strong and intense, and somewhat stubborn in nature.

Like this? Looking for other breed statistics? Then check out my following guides below: