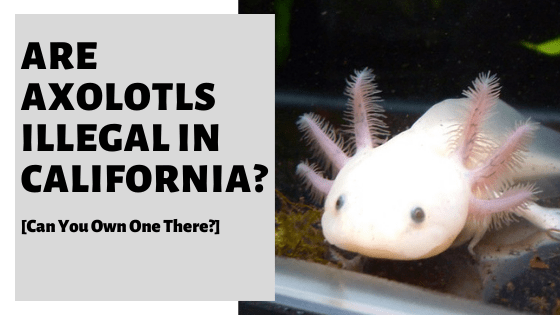 As a resident of California, you may be wondering whether or not it is legal to keep an axolotl as a pet. Having researched the local laws, here is what you need to know.

So are axolotls illegal in California? Axolotls are illegal to sell, keep, and own in California and some other U.S. states such as New Jersey and Maine. Laws have been put in place to protect native ecosystems (wildlife and agriculture), the general public’s health and safety, and axolotls themselves, which are now considered endangered species.

And it does not just stop at Axolotls; this is any other species of Ambystoma too.

Essentially, any other salamander.

And ferrets are illegal in California, too, by the way.

So you do need to be careful.

Especially if you do see them for sale in a pet shop or by any other exotic pet enterprise.

Or if you currently own one and planning on moving to Cali.

And while it may be tempting to break the law and keep one anyway, consider that this could have a considerable impact.

On local ecosystems, the axolotl species and Californian law could become even more restrictive.

Let us now take a closer look at the legality of these amphibians.

Can I Have An Axolotl As A Pet In California?

You cannot legally have an Axolotl as a pet in California. The only exception is if you own a permit, but these are generally hard to come by and expensive these days.

In fact, there are many stipulations required to obtain a permit, such as length of ownership, the need to keep them humanely, contained, and supervised via inspections and/or a vet’s signature.

Plus, these permits are very expensive.

So, for the most part, axolotls are not feasible pets for any resident of California.

And ignorance of these local laws is not considered a legal defense.

You can be prosecuted.

It is a crime.

This is true even if you were able to purchase an Axolotl in California or bring them in from out of state.

And it can happen, especially if local fish and game suppliers are not aware of this law.

Neverthless, the California Department of Fish and Wildlife confirmed that Axolotls could not be legally owned:

Why Are Axolotls Illegal In California?

Axolotls are illegal in California for three main reasons: to protect local ecosystems (wildlife and agriculture), ensure the general public’s health and safety, and protect axolotls (a critically endangered species).

As you can see, the key theme running throughout these reasons is preservation – of all parties involved.

And it is believed that the ban on owning Ambystoma species in California initially arose due to fisherman disposing of their bait.

Although, it is feasible to believe that it could also be in response to the risk of owners releasing their Axolotls into the wild.

Besides, if an axolotl were to be released, they could interbreed with native salamander species and/or severely impact the ecology of the state.

What States Are Axolotls Illegal In?

Axolotls are currently illegal in California, New Jersey, Maine, and Virginia. While in New Mexico, it is legal to own an Axolotl but illegal to import them to other states.

Nevertheless, it is essential to always check local laws before ever owning an Axolotl. Laws are always subject to change.

Equally, be particularly mindful of the wording of any documents reviewed.

It could be that the entire species-genus are banned, such as is the case in California with Ambystoma.

It would be best to directly contact your local authorities and speak with somebody within a government institution directly.

What To Do With An Axolotl In An Illegal State?

If you were to own an Axolotl in an illegal state, it could be challenging to know what you can do.

Besides, you are technically breaking the law, and you do not want to get into trouble, even whether this was unintentional.

Here are some of the recommended things you can do.

First and foremost, it’s a good idea to contact your local Fish and Wildlife authorities to enquire about how you can safely and appropriately deal with the situation.

If they were to suspect you own Axolotls, then chances are they will contact you regardless.

Nevertheless, they will be able to advise you on what you can and cannot do.

Although, do consider that you will be soon parting with your Axolotls.

The state will likely request that you hand them over.

It is immensely upsetting to learn, but they will be likely be euthanized.

Although there is very little you can do at this stage.

At the same time, you mustn’t breed any Axolotls further.

Separate the males from the females to do so.

Depending on your moral stance, you may even want to euthanize any eggs you do own immediately.

While the state can do this on your behalf, if you are not comfortable in doing so, consider that the sooner eggs are euthanized, the better for everyone involved.

Euthanizing the eggs before they can develop into an embryo or develop a nervous system will ensure they do not feel any pain during the termination.

Do Not Distribute Eggs

You mustn’t distribute any of eggs you may currently own to other individuals.

Otherwise, you will be putting those individuals in an illegal and challenging position.

It will be significantly more challenging for them down the line when the eggs develop into adult axolotls.

Plus, you will also be breaking the law by doing so.

Owning Axolotls in California and in some other U.S. states is illegal under local law.

And there are several reasons for it.

Unfortunately, this pet is just not feasible in some states.

So if you did want to get on and are a resident there, then it is in the interest of all parties you consider another option.

If you find yourself in the unfortunate position of already owning one, you will need to consider how you respond to the situation proactively.

This article is by no means offering legal advice nor recommendations for Axolotl ownership in the state of California or otherwise. It is essential and vital that you do your own research, come to your own conclusions and contact your local authorities for further information regarding pet ownership in your state, and of particular exotic species.