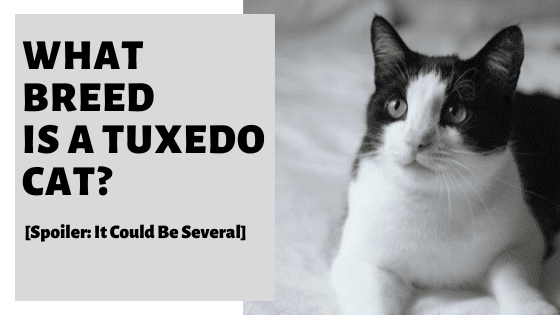 If you are considering a tuxedo cat, naturally you’ll want to know what breed you’ll be getting. Besides, it gives a pretty important reference point for temperament and size. Well, here is what you’ll be pleased to have found out.

So, what breed is a tuxedo cat? A tuxedo cat can be any breed of cat with black and white markings that resemble a tuxedo (the suit). Their chests are often white, with white feet and a black back and legs. With that said, tuxedo cats are most commonly found among the Maine Coon, American Shorthair, British Shorthair, and Turkish Angora breeds.

Tuxedo cats are not a distinct breed like Persians or Siamese: they get their name from their distinctive markings, like tortoiseshell and calico cats.

Tuxedos get their name from the black and white markings on their fur, making them look like they’re wearing a tuxedo.

Unlike calicos and tortoiseshells, who are mostly females, tuxedos can be either male or female.

With this in mind let us look at what makes a cat a tuxedo and explore the breeds in more detail.

That way, you’ll know what to expect should you decide to buy one!

What Makes A Cat A Tuxedo?

What makes a cat a tuxedo is a bicolor pattern on its fur – a combination of black and white. Usually, the body is black, and the paws, whiskers, tummy, and chest are white. Some tuxedo cats have white on their faces, too.

Tuxedo colors have been linked to the white spotting gene (for piebald or unpigmented fur).

Cats with less than 40% of white spotting are considered to be tuxedos.

If your tuxedo cat has white around their chin and nose, then they are a masked tuxedo. Other tuxedos have a black ‘goatee’ or a white ‘mustache.’

Some tuxedo cats have a spot of black on their chest that looks like a bow tie, and these animals are called black tie tuxedo cats.

Black tie tuxedo cats are believed to be lucky charms that bring their owners good fortune or wealth.

All cats carry genes for white fur, and when this gene is dominant, more white fur is present – usually in strips of white.

When the piebald gene isn’t dominant – in other words, when there is one dominant gene for piebalding along with a recessive gene for solid colored fur – cats can have white fur in spots.

In this case, the piebalding gene is said to be an incomplete dominate.

Cats that have a dominant gene for solid-colored fur will usually have one solid color.

Tuxedo cats have their piebald gene as either a dominant or an incomplete dominate gene (hence the markings of white).

There are other bicolor cats with similar patterns in different color combinations, such as red or orange mixed with blue or gray, and white.

These cats, however, are not tuxedos.

But for a cat to be a pure tuxedo cat, the markings are exclusively white and black.

Calicos can be confused with tuxedos, although calicos have three different colors – usually, they are mostly white with orange and black or grey and cream patches.

What Breeds Can Tuxedo Cats Be?

Tuxedo cats (also called tuxies) can be of several breeds. Any of the breeds below can sport a tuxedo pattern:

How To Tell What Breed A Tuxedo Cat Is

Because tuxedos are not a separate breed, you will need to use the same methods of investigation as you would to identify any breed of cat.

Tuxedos can have long or short hair, and they can be purebred or mixed-breed.

If your cat came to you from a pet shop, an animal shelter, or a litter of kittens in someone’s home (who isn’t a breeder), then you probably have a domestic tuxedo that doesn’t have an official pedigree or breed.

You can still check for physical traits to find out what mix of breed your cat is.

The list of breeds above is a good place to start. Look for features that are typical of each breed.

How long is your cat’s fur?

Is it short? Medium? Long?

Look at the breeds listed above to check which ones correspond to your cat’s type of fur, and make a shortlist.

Now, look at your cat’s ears.

Are they folded forward?

If they are, you may have a Scottish Fold kitty.

If they’re folded backward, perhaps you have an American Curl.

If your cat’s ears have lynx-like tufts, you may have a Norwegian Forest Cat.

Look at your cat’s tail.

If they don’t have a tail, then that’s easy – you could have a Manx.

If their tail is very fluffy, you could have a Persian, a Maine Coon, or a Norwegian Forest Cat.

Next, look at the shape of your cat’s face and body.

Round faces and bodies are typical of Persians, Exotic Shorthairs, and British Shorthairs.

If your cat has a sharp and elfin face, maybe you have a Devon Rex.

Consider the overall size of your cat.

If you have a very large cat, you could have a Maine Coon, weighing up to 20 pounds (for females) and 25 pounds (for males).

Most other breeds of cats weigh about 10 pounds, though a Devon Rex usually weighs 6 to 9 pounds.

Look at your cat’s usual behavior.

Are they always ready to play?

Maybe you have a Cornish Rex, a Turkish Van, or an American Curl.

Is your cat more of a lap cat?

Persians love relaxing in your lap, as do Exotic Shorthairs and British Shorthairs.

Have you got a cat who loves the water and wants to jump in the bath with you?

Maybe you’ve got a Turkish Van – these cats are known for being swimming enthusiasts.

If your cat isn’t purebred, it can be tough to know their mix, so you can always get your vet for some help.

There are many aspects to consider when trying to determine the breed of your beautiful tuxedo.

Other Things To Know About Tuxedo Cats

Where To Get Them

You can get tuxedo cats from specific breeders or from an animal shelter. Sometimes they are even available at a pet shop.

If you can, try to adopt a cat who needs a home – you’ll be doing them a real service!

Other than that be sure to only adopt through a reputable breeder.

While they may cost a little more it should ensure that they have been bred, and raised, ethically.

How Much A Tuxedo Cat Costs

A tuxedo cat can cost next to nothing if you get yours at a shelter.

If, of course, you find a tuxedo from a breeder, the price of your cat will depend on the specific breed.

Compared to other breeds of cats, tuxedo cats develop faster.

Most newborn kittens need one to two weeks to open their eyes.

Newborn tuxedo kittens, however, open their eyes 24 hours before any other type of cat!

This may be why some people believe that tuxedo cats are more intelligent than other cats – some say up to 200 percent smarter – but this may be their owners’ prejudice!

Many famous people had tuxedo cats, and many famous cats – both in fiction and non-fiction – were tuxedos.

Sir Isaac Newton, Beethoven, and William Shakespeare all had tuxedo cats as pets.

Some of the most famous cat characters have been tuxedos: Sylvester from Looney Tunes, Mr. Mistoffelees from the Broadway show Cats, and the Cat in the Hat from Dr. Seuss’ books.

One tuxedo cat even ran for political office.

In 2012, Stan the tuxedo cat ran for the post of mayor of Halifax, Canada.

He didn’t take up the role, but he was the first cat to run for political office. He may not be the last, either!

The richest cat in the world was a tuxedo called Sparky, who in 1998 inherited 6.3 million dollars when his owner died.

The contrast between the black and white, and the way the colors are positioned across the coat and body parts.

They’re smart all year round!

Just consider that the size, temperament, and individual needs do range, though.

There is no one breed of tuxedo cat, nor is there one best way to care and raise for them.

It will depend on context.