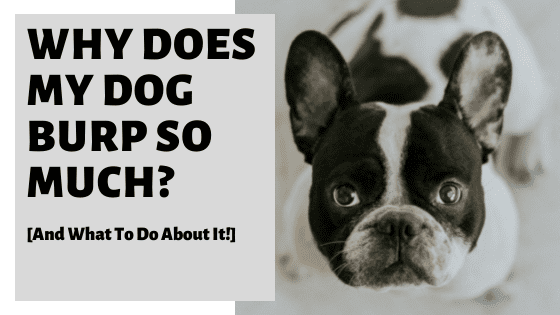 Have you noticed that your dog is burping a lot? Are you wondering why they are doing this and not sure whether it’s a cause for concern? Well, this is what you are going to need to know and how you should respond.

So, why does my dog burp so much? Your dog may burp a lot due to the breed and their physiology; some dogs naturally burp more than others. Or, it could be a sign of age – older dogs tend to burp more. Although sudden onset increased burping can result from dietary changes or the onset of a digestive medical condition that requires investigation.

Like humans, burping is perfectly normal in dogs – most reasons are harmless and easily corrected.

However, excessive burping – particularly compared to what is ‘normal’ for your particular dog usually indicates something has gone awry.

Therefore, it’s essential that you do keep a close eye on your dog over time, and if you are concerned, do contact a vet.

But before you pick up the phone, let us look at why dogs even burp, to begin with.

We will then delve into the reasons why dogs can burp in greater detail before proceeding to how you should respond in each context!

What Causes Burping In Dogs?

Dogs burp when they’ve inhaled too much air, and it needs to be released. Eating and drinking too fast are one of the most common causes of burping in dogs.

Sometimes it seems like your dog is inhaling their food, and you’re not sure why. How quickly dogs eat is simply an evolutionary response to surviving in the wild.

Dog ancestors, native to the wild, needed to fight for every meal they found.

If they weren’t competing with other dogs in the pack, it was with animals such as vultures to get their fill before there was nothing left.

When a dog eats quickly, they are gulping in large amounts of air at the same time. This gets trapped in their stomachs and needs to be released.

Burping and passing gas is how they get rid of this air.

However, it’s important to watch for how much air they inhale and how much they burp as it can be a sign of serious illness such as GDV.

Gastric Dilation-Volvulus (GDV) occurs when air in the stomach is trapped because of a twist in the gut. Early signs of GDV include unproductive vomiting and excessive burping.

It is more common in deep-chested breeds like Great Danes, Retrievers, and Irish Wolfhounds.

But it can occur in dogs that eat too quickly, too much, and those that exercise directly after eating.

Reasons Why Dogs May Burp More Than Usual

Why dogs may burp more often than usual include age, change of diet, breed type, new competition, or ill-health.

As dogs get older, everything slows down, including their digestive system. You might notice their swallowing reflexes aren’t what they once were, causing increased burping.

Not only has their digestive tract slowed with age, but they experience decreased absorption and digestion.

The important digestive enzymes and gastric acid aren’t produced as much as when they were younger. Therefore, the food stays in their gut for longer, resulting in more gas release and burping.

Dogs who have an alkaline diet tend to burp more as there is increased gas released when the food enters the stomach acid.

If their diet has recently changed, expect increased burping as they adjust to the new food. Gradually changing the food, they’re eating is crucial to help with burping.

A food allergy or intolerance is another dietary cause of aerophagia (excessive burping). Allergic or intolerant dogs will burp and pass gas more frequently if their food doesn’t agree with them.

Another reason for burping is the breed.

Some dog breeds, known as brachycephalic breeds (short-nosed), tend to inhale more air while eating because of their shortened respiratory tract.

It’s why they also tend to snort a lot, too.

These brachy breeds include pugs, bulldogs, boxers, and Boston terriers.

So, if one of those dogs is burping more often than other breeds in the home, this could be the culprit.

Other or New Dogs

Speaking of a multi-dog household, if there is a new addition to the home, this could be the cause of increased burping.

Competition between dogs during mealtime is common, which will increase inhalation and therefore burping.

A dog burping after a meal or drinking isn’t something to be too worried about.

However, if they’re burping more than usual outside of those times, it could be a sign of something serious going on.

Along with being an early sign of GDV, excessive burping can be an indication of gastrointestinal upset, particularly if the burps smell horrible.

The smell is due to the air escaping from the stomach is produced there. Sometimes they smell like rotten eggs, fish, or of their previous meal.

If their burps smell of rotten eggs, it’s usually because of a high-protein meal or a medication they’re on.

Is It Normal for A Dog To Burp A Lot?

Essentially no, it’s not normal for a dog to burp a lot. Burping a lot, especially outside of mealtimes, is usually a sign of stomach upset or something more serious.

Burping is common in dogs like it is in humans. Humans tend to burp because of drinking sodas too quickly or eating food that’s disagreeable.

Whereas dogs usually burp because they’ve eaten too quickly or drank water too fast. Therefore a few burps after a meal or drink are completely normal and harmless.

However, frequent burping outside of meals is a cause for concern and needs to be monitored to see if it will quickly resolve itself.

It may just be one bad day where a dog might have gotten into some food they shouldn’t have and is burping off their upset stomach.

Nevertheless, if the excessive burping is continuing for a few days, it’s time to do some investigation to find out why.

What To Do If Your Dog Is Burping

If they’re burping a lot all the time, you need to monitor their habits and visit the vet. But, if your dog is burping because they’re eating too quickly, you can encourage them to slow down.

The first thing you can do to help resolve burping is to monitor your dog.

Make a note of how often they burp if there’s a particular time it’s more frequent, and what the burps smell like.

And most importantly, if it’s accompanied by vomiting (productive or not), abdominal cramps, or diarrhea.

This notetaking might seem excessive, but it will help find out what the cause of your dog’s aerophagia is, or at least help your vet diagnose your pet more easily.

If they burp more than usual before going somewhere, it might be because of stress.

When a dog is stressed, they gulp in the air to try to ease their heightened heart rate.

If your dog seems to burp more often during the evening after their free time outside, they may have gotten into trash bins outside and have eaten rotten foods, resulting in evening time burps.

The smell of a dog’s burp is a great indicator of what’s going on inside their guts.

It can help you realize that they might be getting too much protein or needing an adjustment to medication (rotten eggs smell).

Even though a few burps after eating are mostly harmless, it still can be an annoying habit to have to deal with.

Whether or not your dog is wolfing down their food because of greed or out of competition, there are ways you can stop them from burping.

How To Prevent Your Dog From Burping

You can prevent your dog from burping in several ways. You can introduce a more agreeable diet, slow-feeder bowls, separate feeding times for pets, or have smaller, frequent meals rather than one big meal a day.

Sometimes a simple change of diet is enough to prevent your dog from burping.

If you notice your dog’s kibble is full of soy, pectin, and cereals, changing it to a high protein, high fiber diet will help prevent burping.

A warning, though, switching foods too quickly can cause burping, too, so make sure to incorporate the new food gradually to prevent any stomach upsets.

Another way to avoid burping is to give your dog their food in slow-feeder bowls.

These bowls are designed to slow a dog’s eating speed and improve digestion.

This includes puzzle feeders, which have the bonus of keeping your dog’s mind sharp as well as helping their digestion.

If your dog is part of a multi-pet household, they might be gulping down their food to prevent any other pet from taking it.

To reduce the speed your dog is eating, consider separating them from the rest of your animals during mealtimes, so your pet doesn’t feel under pressure to eat quickly.

Another simple tip is to give your dog smaller, multiple meals throughout the day. This will help reduce the build-up of gas and help with their digestion.

You can feed them at the same time as you have your breakfast, lunch, and dinner for convenience’s sake.

Or some owners leave their dog’s food in a bowl all day to allow them to eat when they want without speed eating.

Burping is common in dogs and, most of the time, shouldn’t be a concern.

Besides, this is somewhat of a natural reaction following mealtime.

However, if your dog is excessively burping, particularly compared to what is normal, for them, it very well could be a sign of something serious and deserves a visit to your vet.

Have you noticed other interesting behaviors in your dog? The following guides may help explain them!