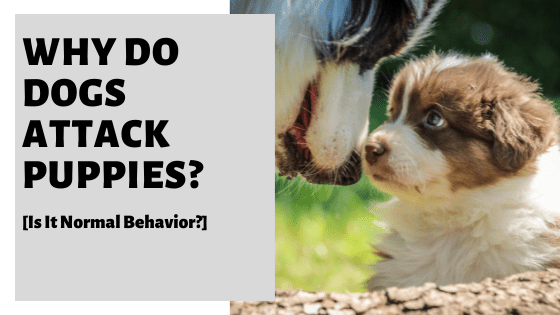 I think it is fair to say that our dogs sometimes do things that we don’t quite understand. One particular example is when a dog attacks a puppy. Well, turns out this behavior is shared among many breeds and is not as uncommon as you might have initially thought. But why do they do this? Is there anything that you can do to prevent it? And what do you do once a puppy has been attacked? In today’s post I am going to be exploring all these questions and more.

So, why do dogs attack puppies? A dog will often attack a puppy to assert its dominance. It may be that the puppy is seen as a threat to what he perceives to be his territory. If they are in the same household, the older dog may be jealous of the attention that the puppy is getting. Or it could be in response to an action by the puppy that has irritated the older dog.

As you can see, there will be an underlying cause behind this assertive behavior – it’s not something that ‘just happens’.

But at the same time, there can be multiple different causes.

So let us now delve into them, before turning to what a fair and appropriate response looks like should you observe or experience this unfolding before your very own eyes.

The most common reasons why dogs attack puppies are that they perceive them as a threat, they are jealous of the attention they are getting and want some for themselves, or the puppy is provoking the older dog.

Let’s go through them one by one.

Whether the puppy intends to be a threat or not, an older dog may see a young puppy’s mere presence as a threat to his territory.

An adult dog will perceive his yard, his house, and sometimes even his favorite outdoor haunts as his territory and his alone.

Even though the puppy could be quite smaller than the adult dog, he is still another animal in that dog’s space and has the potential to be a threat.

An older dog’s sense of territory could extend to not only your home but his food bowl or his favorite spot on the couch!

The Older Dog Is Jealous Of The Puppy

When a puppy comes into your new home, suddenly the older dog can get much less attention than he’s used to receiving.

Therefore, he may see the puppy as an intruder who is stealing affection, playtime, and other rewards from his beloved people.

Older dogs don’t always want to share their home, toys, and humans with an unknown dog that they didn’t invite inside their space.

Suddenly he finds he’s in competition for all of his resources that used to be his alone.

If your dog has become used to enjoying all of your attention, he may attack a puppy who is threatening to steal away what is important to him.

The Puppy Is Provoking The Older Dog

Sometimes a puppy can provoke an older dog without meaning to be invasive.

There are times when a puppy is doing something that annoys the older dog, and even if the older dog is usually kind and patient, he may get annoyed to the point where he attacks.

Is It Normal For Dogs To Attack Puppies?

There are instances where it is understandable – and even normal – for dogs to attack puppies.

If Their Territory Is Under Threat

Dogs are naturally territorial animals, so it’s perfectly normal for an adult dog to want to defend his territory from a younger pup.

Even though dogs are pack animals, they have a strong sense of hierarchy, and they can panic and attack if they feel the safety of their territory is being threatened.

This is why many dogs make excellent watchdogs – but it’s also why they can attack younger dogs, including puppies.

They may, in moments when another dog intrudes upon their space, feel that their territory is in danger of being overrun or usurped by the younger dog.

In nature, wild dogs will fight each other to determine who is the alpha male and who, therefore, leads the pack and looks after the territory.

If They Feel Jealous

It’s also natural for an older dog to feel jealous when a puppy suddenly gets attention and resources previously reserved for him.

It’s normal for dogs to feel insecure, just like people do, and this can vary from one dog to another.

Dogs need lots of cuddles, games, exercise, and other activities to keep them occupied and stave off boredom.

If resources are scarce – for example, only one toy, a small garden, or not enough exercise – this can cause jealous behavior.

When Are Dogs Most Likely to Attack A Puppy?

Dogs are most likely to attack a puppy when they feel frightened, threatened, or insecure.

Watch your dog’s body language to see if he’s thinking of attacking. Here are the most common signs of fear or insecurity in dogs:

Your Dog May Be Teaching The Puppy About Boundaries

Most dogs will let puppies know with warning signs when the younger ones are pushing their buttons.

It’s worth bearing in mind that what sometimes looks like aggressive behavior or attacking (snapping, growling) is often the older dog teaching the puppy where his boundaries are.

Like people, dogs have boundaries, and they want them to be respected.

Most of the time, you don’t need to get involved – on the contrary, this could be counterproductive.

The puppy needs to learn what’s acceptable, and your older dog is the best one to teach him.

The only time for you to take action is if the puppy annoys the older dog to the point where the adult physically attacks or hurts the younger one.

How To Prevent A Dog From Attacking A Puppy

Fortunately, there are some steps you can take to avoid older dogs attacking a puppy.

If The Problem Is Over Territory

If you have two dogs in conflict over territory, here are the types of behavior you might see from the older dog:

To avoid territorial behavioral problems, you can plan how to introduce your new puppy to other dogs before bringing the puppy home.

How To Introduce A New Puppy To An Older Dog

Here’s how to introduce the two dogs so that everything goes as smoothly as possible.

If The Problem Is Jealousy

If your older dog is jealous of the younger interloper, you can take steps to make sure your adult dog feels safe, secure, and just as loved and valued as before the new arrival.

Here’s what you can do to help:

If A Puppy Provokes An Older Dog

If a puppy has provoked an older dog, you don’t want to yell at either dog.

The puppy is most likely unaware that he’s annoyed the older dog. He just needs to learn what’s acceptable and what isn’t.

If you’re out and about on a walk, go the other way. Leave and divert your dog/ or puppy’s attention elsewhere.

If you are at home, you can try using a high baby gate: the gate will enable them to smell and interact with each other without the threat of close physical contact.

Otherwise, it may require you and a partner, friend, or family member to retrain the puppy/dog, allowing them to get close without things escalating.

What To Do If A Dog Has Attacked A Puppy

The first obvious thing is to get the puppy to a vet, especially if you suspect he has been seriously hurt.

Don’t yell at either dog, as that will only add to their fright and upset.

If the puppy lives in your home with the older dog, or if the dogs are likely to meet often, avoid any face-to-face contact between the dogs for three to four days.

After a few days, get a friend to help you reintroduce the dogs to each other, following the steps below:

Have patience, continue to reward them for good behavior, and soon you’ll see them develop a peaceful relationship – or at the very least, tolerance of each other!

Dogs can and do attack puppies.

Whether that be another puppy they have never encountered before or a new pup that is brought home.

While it’s upsetting, it is important to understand that it’s not unusual.

That being said is not something you should allow, or facilitate in any way.

It’s important to keep a young puppy safe at all times; so distancing the older dog and ensuring only positive and gentle interactions are essential.

It may take some time, it may take careful and controlled introductions, but in the end, you should find that this is something that will cease.

And if it doesn’t, then you should consult a professional; besides, it may require a little more work!

Up next: Why Do Dogs Attack Cats? [4 Distinct Reasons & Possibilities]