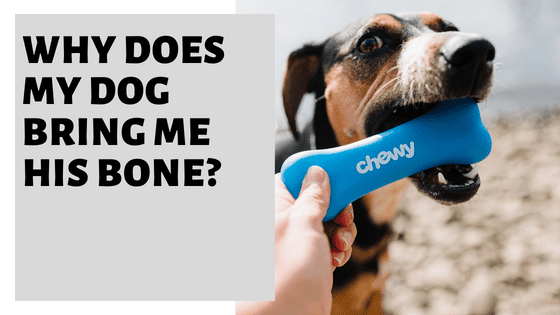 Dogs and their bones, eh? One minute they’re running off and retreating to eat it; the next, and they’re bringing it to us. But why do they do the latter? What can it mean; is it to initiate play? Does he think you want a chew too? Do all dogs bring their owners a bone? Should you stop it? Well, these are the kind of questions that I’ll be answering here today.

So, why does my dog bring me his bone? Dogs may bring their bone to their owners to show trust or respect, for praise or affection, or to instigate playtime.

So one or two things could be going on here.

But how do you know what one it is exactly?

Well, let’s delve into each possible reason in further detail to help try and find out.

Then we’ll be moving onto those questions previously aforementioned in the beginning. So keep reading!

Reasons Why A Dog May Bring You His Bone

Your dog may bring you his bone to show you he trusts you as his friend and pack leader. Sometimes he may want praise or cuddles. Other times, it’s a game your dog is after.

Your Dog Is Showing His Trust In You

For your dog, his bone represents a treat and a toy. By bringing you his bone, he may be showing his respect and trust in you.

Your dog may be demonstrating that he trusts you enough to share his precious bone with you, knowing you’ll share it with him or give it right back to him.

According to research, dogs are known for sharing their food.

Some dogs will lie down in their owners’ laps to chew their bones, knowing they are safe and supported (both physically and emotionally).

Your dog may also be acknowledging you as the pack leader.

Your Dog Wants Praise From You

Your dog may bring you his bone because he wants you to praise him.

You may have unwillingly communicated to your dog that carrying bones around is good; perhaps you’ve observed him doing this and have given him affection because he looks adorable.

Your dog will believe that bringing you a bone will get him praise, and as your dog is keen to please you, he’ll continue to bring you his bone if he knows he’ll get cuddles and attention.

Sometimes your dog will bring you his bone because he wants to show his love for you, and receive affection.

Some dogs love sharing their possessions with family members out of love.

If you’ve just come home from a busy day and your dog brings you his bone, he’s probably saying he’s missed you, and he wants some love.

Give him a hug and cuddles so that he knows he’s still important to you.

Your Dog Wants To Play

Some dogs bring their owners a bone when they want to play.

For example, if you’ve previously tried to play a game of tug-of-war with your dog’s bone, he may deduce that bringing you a bone is a way to get another game going.

You can usually tell if your dog is bringing his bone out of a desire to play, as you’ll also see him hopping or wagging his tail with excitement.

There are dogs who love to play with their bones – getting their owners to toss the bone halfway across the room so they can fetch it and bring it back.

Do All Dogs Bring Their Bone To Their Owners?

Not all dogs will bring their bone to their owners. Whether your dog does this or not very much depends on his personality, which is often influenced by what breed he is.

If your dog is a hunting or retrieving breed, he’s more likely to bring you various items simply because of his breeding.

Retrievers, terriers, and other breeds are far more likely to bring things to their owners.

Many dogs were bred to fetch and carry prey for their hunting companions, so if this is your dog, you may be unable to stop this natural retrieving behavior.

Here’s how to determine other reasons your dog brings you his bone:

Should You Stop Your Dog From Bringing You His Bone?

If your dog isn’t doing any harm or showing signs of being unwell, there’s no reason to stop him bringing you his bone. However, there are some cases where you’ll want to put a stop to this behavior – for example, if your dog becomes aggressive with his bone.

Most of the time there isn’t a reason to discourage your dog from bringing you his bone.

However, here are some situations where you might not enjoy this habit:

Remember that your dog is communicating his feelings to you by bringing you his bone. Be sure that you know what those feelings might be before trying to put a stop to it.

Most of the time, dogs bring their owners their bone to show their love and affection for their favorite people.

And like people, dogs can feel rejected or hurt: if your dog is trying to show you he loves you, you won’t want to just push him away.

The best practice is to set boundaries for what is acceptable and what is not so that your dog can feel secure and know how to please you.

You may want to let your dog bring you his bone if:

If Your Dog Is Showing Love

If your dog is showing his love for you by bringing you his bone, it could be cruel to refuse it.

You may have to put up with him bringing you bones, especially if positive reinforcement training doesn’t work for your dog (see below).

If Your Dog Is Asking For Playtime

If your dog wants to play with you and communicates this to you by bringing you his bone, there’s nothing wrong with accepting his bone and starting up a game.

As long as he isn’t doing this compulsively, it’s easy to accede to his simple request for fun.

If Your Dog Is Recognizing You As Pack Leader

In a pack of wild wolves, the pack leader eats first – everyone else chews on the leftovers.

You don’t need to stop this behavior – you can pick up the bone and pretend to take a bite out of it, pat him, and give the bone back.

You may find he trots off satisfied to chew on it in peace, having fulfilled his duty of recognizing his ‘leader.’

Some dogs can become very aggressive and protective over their possessions: their bed, their food, their toys, and their bone.

If your dog is becoming aggressive with his bone, it’s best to try and put a stop to this behavior.

However, rather than trying to stop him from bringing you his bone right away, it’s best to address the cause of his aggressive behavior (see below).

How Do You Stop a Dog From Bringing You His Bone?

While you probably can’t stamp out this behavior entirely, there are ways to reduce the number of times your dog will bring you his bone.

If your dog always brings you his bone and you don’t like it, take a look at his behavior and try to understand his reasoning.

A common problem is a dog who brings his owner a bone several times a day out of a constant desire for attention.

Other dogs will try and show dominance or become possessive and even aggressive around their bone and other items.

If Your Dog Is Constantly Demanding Attention

If you suspect your dog is constantly demanding attention from you, you’ll need to use training and established daily routines to help your dog feel more secure and content…

Use positive reinforcement training to ignore the behavior you don’t want (him bringing you his bone).

Reinforce the behavior you want (him bringing his bone to his bed or another safe place where he can chew happily).

When he brings you his bone, as difficult as this sounds, the best thing to do is ignore him.

Don’t look at him, don’t make any sounds – don’t do anything that shows you’ve noticed him or the bone.

Once your dog has carried his bone off to another location, go to him and praise him.

He’ll soon associate chewing on his bone in his new spot with getting what he wants (praise from you).

Ensure your dog has an established daily routine with plenty of mental and physical exercise and stimulation.

A dog with lots of enrichment will be happier and more secure: he won’t need his owner’s attention constantly.

Check that you’re incorporating the following:

Find Alternative Toys To A Bone

If you have a dog who loves to fetch, and he drops his bone at your feet in the hopes you’ll throw it for him, you might want to choose another option.

A heavy bone might not be the best toy to toss around your house, so offer your dog a softer toy that he can chase.

If Your Dog Is Trying To Show Dominance

You can tell if your dog is trying to show dominance if he:

If your dog believes he’s dominant, he may become aggressive around his possessions (see below).

Don’t reach for his bone – get help from a dog behavioral trainer so that you can assert your role as pack leader.

You need to be the dominant one in the relationship – both for you and your dog’s benefit.

If Your Dog Is Being Aggressive

If your dog is becoming aggressive when he has his bone, you will want to address the cause of this aggression:

Once you know the cause of your dog’s aggression, you can take the appropriate steps to remedy it:

Dogs bring bones to their owners.

Often along with a number of other, random things. It could even be a pair of socks or even their treats next time.

In fact, it usually implies quite the opposite.

That being said, there may be reasons and contexts where you may want, or even need to stop it.

So do bear that in mind.