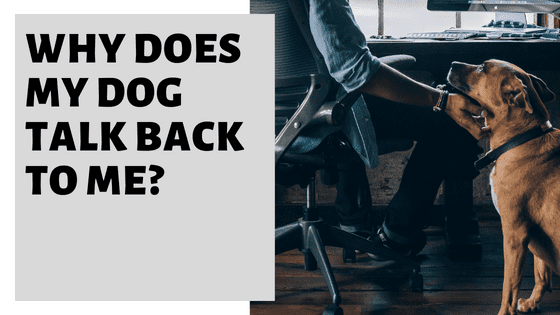 Have you noticed that your dog talks back to you? It’s cute at first, but it does lead us to question what they are trying to say and communicate. So today, I am going to be sharing with you all you need to know about this behavior, from why dogs do it all the way through to whether you could stop it (should you want to).

So, why does my dog talk back to me? Dogs talk back to their owners either because they are seeking to bond with them, they have learned that this behavior brings them rewards, they’re feeling possessive or intimidated, or they just don’t feel like doing what you want them to do.

As you can see, the underlying reasons vary.

So you’re going to need to pay close attention for clues as to what it could be, at the precise moment.

The truth is, your dog may talk back to you for different reasons at different times. So, let us explore each one in greater detail!

Why Do Dogs Talk Back To Their Owners?

Dogs talk back to their owners out of a desire to bond, to say they don’t want to do something, to show they are feeling cowed or possessive, or because they know they will get a reward as a result.

Your Dog May Want to Bond with You

Your dog could be talking back to you out of his desire to strengthen his connection to you.

If your dog is talking to you when you aren’t asking him to do something, and you aren’t trying to take something of his away, it’s possible he is asking to bond with you.

Your Dog Doesn’t Want To Do What You Want

If you are asking your dog to do something and he doesn’t want to do it, he may talk back to you as if to say “no!”

Your Dog Is Feeling Possessive

Everyone has seen a dog barking or doing other things to protect his prized possessions. Some dogs are more possessive than others.

Your dog is likely acting possessive if he talks back to you when:

If your dog is talking back because he’s resource-guarding, it’s essential to train this behavior out of him before it leads to more aggression (see below).

If your dog is afraid of you or intimidated by you, he may talk to you as a way of showing his feelings.

If you notice your dog talking back to you when you are shouting at him or demonstrating aggressive body language, your dog is likely feeling intimidated.

It’s crucial to not shout at or be aggressive towards your dog, as this kind of behavior will only increase his fear of you.

He may become more aggressive as a means of defending himself and will be likely to talk back even more.

Your Dog Knows He Will Get A Reward

Some people give their dogs treats when they bark or make other sounds as if they are talking back.

If you reward your dog for speaking, he’ll most likely want to speak more.

So be wary of giving your dog extra attention, treats, or toys if he talks back to you – unless you want him to continue to do so.

Here are several factors to consider when you are trying to figure out why your dog is talking back to you:

When Does Your Dog Talk Back To You?

Does he tend to do it whenever you ask him to get into the car?

Does he always do it when you approach his food bowl? Keep track of when he engages in this behavior as a clue to the cause.

Is Talking Back A New Behavior?

If your dog never talked back to you and has suddenly started, maybe your dog is becoming possessive because of a new family member, a house move, or some other reason.

What, if anything, has happened recently? What happened around the time he started talking back to you?

If there have been no significant changes in your household, it could be your dog has learned his talking is getting him a reward (attention, even if it’s negative, can be seen as a reward).

What Body Language Is Your Dog Showing?

If he is showing his teeth and growling, he could be either feeling threatened or possessive.

However, if he’s jumping around and wagging his tail with wide eyes, he could be excited.

Dogs seem to like to “talk” to humans when they perceive talking as something that their humans want or enjoy. They will attempt to replicate sounds that we make as a way to get rewards, but not as an activity that’s pleasurable in and of itself.

Some dogs have learned to replicate sounds of their owners’ speech as a way of pleasing them.

For example, some people say “I love you” to their dogs, only to one day hear back a howling approximation!

If you reward your dog when he tries to talk to you, he will enjoy doing it – but only in order to get the reward.

Dogs have limited flexibility in their mouths and tongues, so they can produce lots of sounds that can approximate an attempt at human speech, but it’s more a bid for treats or cuddles than the pleasure of “talking” for its own sake.

Recent studies show that dogs like it when humans talk to them, provided they are using “dog-friendly” words that mean something they can recognize.

Many people will instinctively use a form of child-speak to talk to their dogs, particularly when they’re puppies.

The results of a recent UK study suggest that directing your speech to your dog while using content words that he’s familiar with can not only make your dog pay more attention to you, but it can also strengthen the bond between the two of you.

Both “normal” and high-pitched types of speech were tested (the high-pitched speech many of us use with babies and pets).

Dog-friendly phrases were also used, such as “You’re such a good dog” and “Do you want to go on a walk?”

When they recorded the responses of the dogs to varying combinations of voice tone and content words, they discovered that dogs were most responsive to dog-friendly words as well as speech that they felt was directed at them.

In other words, speak to your dog with words you know they understand and in a high-pitched tone of voice, and he will enjoy you talking to him!

Your dog will appreciate learning specific words like “bath,” “ball,” and “treat” – as well as command words like “sit” and “stay” because he’ll then know what to expect.

Note: Puppies will even react to recordings of high-pitched voices saying similar phrases. Some puppies, when hearing the recordings, would approach the speaker with their front paws down as if to say, “I’m ready to play!”

Can You Stop Your Dog From Talking Back?

There are some instances where you can stop your dog from talking back by addressing the cause of his behavior. When you remove the cause, the behavior will take care of itself. Other times, you’ll just have to put up with it as best you can.

When You Can Stop Your Dog Talking Back

Here are some things you can do to get your dog to stop talking back, depending on why he’s behaving this way in the first place:

Your Dog Knows He’ll Get A Reward For Talking Back

If this is your dog, all you have to do is ignore the behavior you don’t want (talking back) and reward the behavior that you are after (perhaps sitting quietly).

Ignoring your dog when he talks back means not looking at him, not making any sound, or doing anything else that would acknowledge the noise he’s making.

It may be hard to do, but do your best to act like he’s not there. He’ll soon stop when he sees he isn’t getting what he wanted.

Your Dog Feels Intimidated By You

If your dog feels anxious or stressed, you can help him by making him feel more comfortable and secure.

Always speak to him calmly and quietly. Reward the behavior that you want and ignore what you don’t want.

Don’t ever punish your dog.

Establish a routine for his day with clear expectations.

Give him lots of love, and if you know there are situations that he doesn’t tolerate well (e.g., being around loud people or boisterous children), avoid these situations where possible.

Your Dog Is Feeling Possessive

You can implement positive reinforcement training to teach your dog the “leave” and “give” commands.

In addition, you can teach him that he can expect good things when people approach his food bowl, his bed, or anything else he sees as his (including people).

When your dog is trying to assert his will, you can help him with consistent training so that he knows you are the “top dog” and he can relax and follow your lead.

You can also notice his likes and dislikes: what is his favorite game?

Are there any scents or noises that he doesn’t like?

Does he prefer hugs, gentle stroking, or head pats?

What are his favorite rewards?

When You Can’t Stop Your Dog Talking Back

If you think your dog is talking back to you out of his desire to bond with you, you probably won’t be able to stop it.

In the wild, dogs often howl together, which some experts believe is a social bonding activity.

If your dog talks back to you when you aren’t getting him to do anything, he could be trying to bond with you.

The best thing to do to reduce this behavior is to try to bond with your dog in other ways, such as:

Dogs often talk back to their owners.

But still, it is their means of trying to communicate with you.

As we have seen here today, not all ‘talking’ is desirable, nor even should be allowed.

So pay close attention, and address any unnecessary or undesirable talking with the methods presented above.

It could result in a more well-rounded, better-behaved dog, after all.

Noticed other interesting behaviors in your dog? My other guides may be of interest: