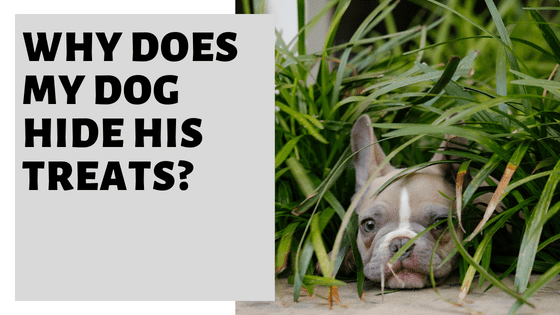 If you love giving your dog treats, you may wonder why he hides them. It’s certainly an odd one, isn’t it? Do all dogs do this; is it normal behaviour, and can you stop them from doing so? If so, how; what should you do? Here are the answers to all of these questions and more.

So, why does my dog hide his treats? Dogs may hide their treats out of instinct to save food for later, because of anxiety, or simply because they’ve eaten too much.

As you can see, there could be one or several things going on here.

So it’s important we delve deeper into each potential reason.

Then we will get onto how you should respond, as I have previously alluded to up above.

Reasons Why A Dog May Hide His Treats

A dog may hide his treats because he is driven by instinct to save extra food for a later time. Other times your dog could be suffering from anxiety. Many times dogs will hide treats if they’re full. And some dogs lose their appetite or feel nauseous.

Your dog’s wild ancestors, such as coyotes and wolves, hunt in packs.

These animals are accustomed to a feast-and-famine existence, where they don’t always know where they’ll get their next meal.

Wild dogs will, therefore, hoard or hide any leftover food for a later meal.

The cool earth acts as a refrigerator of sorts, and animals know their food will keep better there.

These instincts for self-preservation are also present in domesticated dogs.

Some dogs can start hiding treats and food because of negative past experiences.

If a dog has had to compete for resources from an early age, he will tend to learn that it’s best to hide any extra food he receives.

Sometimes dogs have had to contend with other animals stealing their food, so they have learned that the best way to ensure their treats stay safe is to hide them.

It might be that your dog has eaten too much, and he is simply hiding his treats because he doesn’t have room to eat them now.

It can be easy to overfeed an eager dog, and one sign of overfeeding is hiding treats.

You wouldn’t want your dog to get too much food, as this can lead to obesity, so it’s worth looking at your dog’s portions to make sure he’s eating the right amount for his size and age.

Nausea or Loss of Appetite

Sometimes dogs who have nausea will bury their treats.

If your dog hasn’t been doing this before but suddenly starts hiding treats (and food), it may be time for a vet checkup.

Dogs who are picky eaters or who are getting used to a new diet can also engage in this behavior.

Is It Normal For Dogs To Hide Treats?

It’s normal for some dogs to hide treats, given that they would do this in the wild to save food for later. As long as you know your dog is in good health – he isn’t eating too much, and he isn’t suffering from anxiety – there’s usually no cause for concern.

Breeds Most Likely To Hide Treats

Some dog breeds are going to be more likely than others to hide treats because they are dogs who love digging and burying resources.

Hunting and scent dogs come under these types of breeds, and there are many. Some examples are:

Other dogs are notorious food scavengers who love hoarding and burying treats, such as terriers.

If you discover his hiding place, he is likely to dig up his goodies and find a new hiding spot.

For some dogs, this becomes a rather long game of hide and seek with their owners!

Digging treats for you to find can be a very effective way to get your attention, so clever dogs may capitalize on this.

Dogs can hide treats in very unusual places, such as:

Can You Stop Your Dog From Hiding Their Treats?

You can try and stop your dog from hiding his treats if it really bothers you. There are times when you don’t need to worry about it, and other times when you will want to stop this behavior if possible.

You can stop your dog from hiding his treats to some extent, but be prepared to arm yourself with patience. Some dogs will find it easier to stop than others.

Most vets would say that you can stop your dog from hiding treats, but if you are attempting to stop him from doing something that he needs to do, you risk making him anxious.

When You May Want To Let Him Be

Once your dog is no longer anxious, you’ll be able to stop him from hiding his treats more easily.

If your dog is looking for a place to eat his treats in peace, be sure to provide him with a calm space that he can call his own.

If he is always having to compete with other animals for space, he will have more of a tendency to hide his treats.

Provide him with a safe spot first and then see if the behavior resolves itself on its own.

Otherwise, you can start training to rectify it (see below).

When You Will Want To Stop Your Dog’s Behavior

Sometimes you’ll know that you need to stop his behavior if it’s a sign of unhappiness, such as:

Other Things To Consider

You may also want to consider a few more things before trying to minimize your dog’s hiding habits:

What To Do About Your Dog Hiding Their Treats

If your dog insists on hiding his treats, there are simple things you can do to train him out of this behavior. There are also a few things to avoid doing.

How to Minimize Your Dog Hiding His Treats

Here are some ways you can try and minimize the number of times your dog hides his treats:

Whatever you do, do not do any of the following when trying to train your dog:

A dog that is hiding his treats is likely displaying instinctual behaviour.

Though this may not always be the case.

So watch over your dog and observe closely.

That may give you some clues, as will thinking about the situation at hand.

Thankfully, this is not a behavior you need to be especially concerned about – unless of course, it is accompanied by other more serious symptoms…