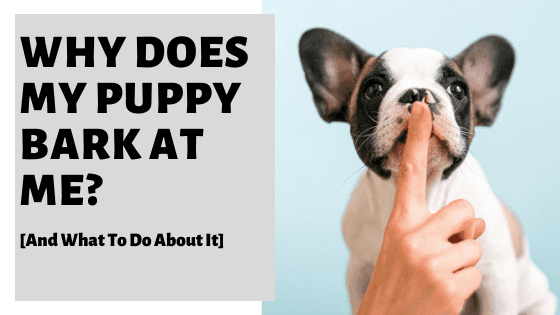 If you find that your puppy barks at you, you may be wondering if it’s normal, if it’s a stage that puppies go through, and what you can do about it. Are there ways to stop it? Why do they do it, and what does it mean? Here’s everything you’ll want to know.

So, why does my puppy bark at me? Young puppies often bark at their owners to get their attention. Your puppy can be barking at you because he wants something from you or because he wants to warn you of something. He might be bored or excited. He might bark because he’s learned that barking is rewarded by reactions from you.

As you can see, there are various different reasons why your puppy may be directing their barking toward you.

And as such, a lot is going to come down to context.

So, you are going to want to try to identify when and where your puppy barks; is it accompanied by other behaviors or in response to anything else happening at the time or within the wider environment?

Observe closely and look for patterns.

Only then will you be able to truly confirm why your puppy barks at you and can then proactively go about responding in a way that makes sense.

Nevertheless, let us explore the main reasons in further detail before turning to appropriate responses to addressing this behavior.

Reasons Why Puppies Bark At Their Owners

Puppies bark at their owners for different reasons. For attention, claiming ownership of an item, as a means of displaying aggression or out of boredom/excitement are perhaps the most common.

Let us explore these reasons in greater detail.

If your puppy learns that barking at you gets him attention, he will continue to use barking as a strategy to get what he wants.

Some owners find their puppies bark at them every time they come home, as they know they will immediately be petted, spoken to, or stroked.

It could be that your puppy needs something such as food, a toilet break, or even medical attention.

If you notice your puppy suddenly barking more than usual, it could be he is in pain.

Take your puppy for a checkup if you think he may be ill or hurt: better to be on the safe side!

Some puppies bark when they are trying to warn you of something, such as an intruder or something else happening that they feel unusual.

Your puppy may have heard a noise, spotted unfamiliar animals in your yard, or seen someone walking outside past your house.

Your Puppy Is Being Possessive

Sometimes puppies bark if they want to protect what they consider to be theirs, like the food they’re eating or a favorite spot in the house.

Dogs guarding resources can lash out, so you will need to train your puppy out of this behavior while he’s young.

Your Puppy Is Bored

Puppies – and adult dogs – can bark out of boredom or frustration.

If your puppy isn’t getting enough exercise, for example, he can bark at you as if to say, “Take me out, I’m bored!”

Your puppy might bark at you at a time when you would normally go for a walk or on a day when you haven’t been able to give him as much playtime as you usually would.

Your Puppy Is Excited

It could be that your puppy is excited: if he loves going for a walk, he may be barking to show his happiness.

If your puppy barks while playing with you, check his body language to see if he’s barking out of excitement or intimidation.

Puppies need lots of play, but they are also building their confidence. Some puppies are more fearless than others.

Your Puppy Is Being Aggressive

If you see signs of aggression along with your puppy’s barking, it could be your dog is feeling frightened or threatened. Look for things like:

Do Puppies Go Through A Barking Stage?

Puppies do tend to bark more in the early stages of their lives, as they crave more attention when they are young. That being said, puppies can take this behavior into adulthood if it is encouraged or not adequately addressed.

It must also be acknowledged that all dogs bark, to some extent.

They also bark at different things; whether this be humans, other dogs, or even objects!

And it is not something you will entirely be able, nor should try to eradicate entirely.

So while you may notice your puppy barking more initially, with appropriate care and in time it will reduce.

Not entirely and not in all circumstances and contexts, but in many and in response to those reasons specified above.

At What Age Do Puppies Start Barking?

Puppies will usually start making sounds at around 2 or 3 weeks old, just after their eyes and ears are open.

At first, they’ll be whining or grunting, but these vocalizations will usually develop into yips and barks by the time they’re 6 to 8 weeks old.

Some puppies, though, won’t bark until they’re almost 16 weeks old – it’s a combination of their breed, environment, and temperament.

How Do Puppies Learn To Bark?

Puppies learn to bark in one of two ways:

What To Do If Your Puppy Barks At You?

If your puppy barks at you, it helps to know why your puppy is barking and if there’s a reason for it or not.

What If My Puppy Barks Without A Reason?

If you think your puppy is barking for no apparent reason, it could be because:

Consider When Your Puppy Barks

The timing of your puppy’s barking can help you discover the reason and, therefore, the solution.

If your puppy barks every time you’re about to feed him or exercise him, you can train him out of this behavior by ignoring him when he barks and giving him what he wants once he’s quiet (see details below).

If your puppy seems to bark at random times, this probably means your puppy has learned that barking equals attention (or another reward) from you.

Reward the behavior you want rather than what you don’t want just to try to keep him quiet!

What If My Puppy Barks At Me When I Come Home?

If your puppy barks at you when you come home, don’t respond immediately, no matter how guilty you might feel.

Instead, walk into your house without fuss, as if you being away is a normal occurrence.

Once you’ve been home for a few minutes (once your puppy has stopped barking), go to your puppy and play with him or give him affection.

Your puppy will soon learn that he gets attention when he is calm rather than when he barks.

As a general rule, make sure you give your dog exercise and playtime before you leave the house each time.

Give him the food he needs before you go, as well as a toilet break, and have a comfortable spot for your puppy to settle in when he wants to.

The safer and happier he feels, the better.

When you do leave, don’t make a big deal of it: do your best to leave calmly and quietly, without speaking to or petting your puppy as you go.

You want him to know that your leaving is not a cause for concern – so there’s no need to fuss over him before you go!

What If My Puppy Barks At Me When I Sit Down?

If your puppy barks at you when you sit down, it’s likely your puppy is either hungry or bored.

If your puppy does this after you sit down, then it’s a clear sign he’s learned that this behavior will bring extra attention from you.

What If My Puppy Only Barks At Me?

If your puppy only barks at you and leaves other family members alone, it’s probably because he sees you as the one who gives him what he wants.

Perhaps you’re the only one who feeds him, takes him out for games and exercise, and cuddles him.

Another reason could be that perhaps you reward him when he barks and other family members don’t.

How Do I Stop My Puppy From Barking At Me?

Here are some options to try to get your puppy to stop barking at you.

As we mentioned above, reinforcing and rewarding the behaviors you want to see will help your puppy learn to bark less.

Be Consistent And Gentle

It’s essential to be consistent with your puppy’s training so that he knows what to expect.

The clearer you can be with your signals to your puppy, the faster he will learn what you want.

Be gentle when training your puppy: aggression or punishment never works with animals.

Your puppy will only be frightened of you and will be even less likely to do what you want.

If your puppy does something you don’t like, withhold your attention instead of telling him off.

Don’t be tempted to get a bark collar: experts recommend against them, and they’re no substitute for good training!

Puppies (and older dogs) appreciate a daily routine because it helps them feel more secure.

This tip will be particularly helpful if you have a puppy who barks when he wants to be fed or wants exercise.

If your puppy knows what to expect and when to expect it (e.g., a walk outside with you once you’ve come home), he’ll find it easier to stay calm.

He’ll be confident that the reward he wants is coming.

Get Professional Help If You Need It

If you are having trouble training your puppy – particularly if your puppy is showing signs of being aggressive – you may need professional help.

Some puppies are easier to train than others: there’s no shame in calling upon a dog trainer or behaviorist to help you both.

Better to get help so that you and your puppy can continue to bond together and be happy and then be able to focus on enjoying each other’s company!

It’s just what they do, and it’s how they primarily communicate early on.

That being said, not all barking is favorable, even if it is kind of cute, to begin with.

So if your puppy is barking specifically at you, it’s sensible to try to get a feel and understand as to why.

You’ll also want to nip this in the bud while they are young and while you can.

This is not something you want to encourage, nor would you want it to proceed into their adult lives.

So start with some positive reinforcement training techniques.

Or failing that, or in addition, consider getting professional help.

It will all be worth it in the end. Believe me.

Have other questions about your puppy’s behavior and tendencies? Well, my following guides may be of help: