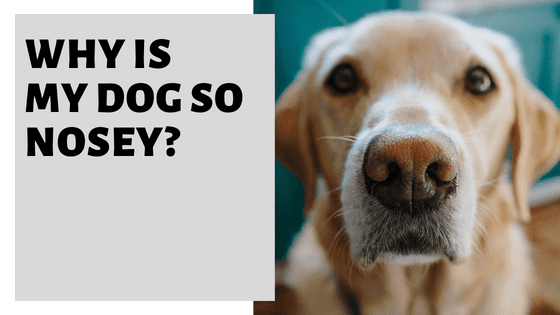 We love to have our dogs around. They provide wonderful companionship. But there is of course, a limit. We need our own space, after all. But some dogs, they just appear so nosey. Chances are if you are here today, you are finding this too – maybe in general, perhaps more long-term. Either way why is your dog like this; what is it about dogs that makes them so curious? Are all dogs nosey and if so, can you stop this? Well, here are the answers to all of those questions and more.

So, why is my dog so nosey? Dogs can be nosey for several different reasons, with the main ones being that they are experiencing a heightened sense of smell, have had a lack of training, have not been given enough exercise, or have not been fed the right food.

As you can see, there is no singular standout reason.

It could be one, or several of these things, too.

Or it could even change in time.

So let us explore each one so you can hopefully put your finger on the cause in your dog.

Then we will get onto the solutions, so stick with me.

Reasons Why A Dog Appears Nosey

Your dog can appear to be very nosey because of his sense of smell. Since a dog’s sense of smell is so highly developed, he may simply be enjoying all of the sensory input he’s getting. Your dog could also be lacking something in his routine that causes him to seek stimulation through his nose.

Your Dog Is Getting A Lot Of Sensory Input

Dogs can appear to be overly curious or nosey, but often this is because they are reacting to their highly developed sense of smell.

Dogs also have more scent receptors: while we have about 6 million, most dogs have around 100 million.

All of these scent receptors are giving your dog quite a lot of information which will be highly interesting to him.

The Structure Of A Dog’s Nose

A dog’s nose is built to enhance his smelling capabilities, too. While we breathe in air that all goes to our lungs, dogs have a flap that separates around 12 percent of the air. The separated air goes to a recessed area where they have time to process the scent.

When a dog exhales, the air goes out the slits in his nose and helps to push new scents in.

Dogs with long ears – like Basset Hounds and Bloodhounds – also use their ears to brush smells toward their noses.

It could be that you have allowed your dog to follow you around and sniff at everything (including guests).

If this behavior is all your dog has known, he is likely to continue unless he is trained to stop (or at least to do it less).

If your dog doesn’t get enough exercise, he may seek stimulation by sniffing everything in sight. Dogs need both physical and mental stimulation, which exercise provides.

Dogs are natural foragers since they descend from wild dogs who had to forage for food. You may have noticed that your dog enjoys hunting for food or treats.

Not the Right Food

A dog that isn’t getting the right kinds of nutrients may naturally sniff around to see if he can find them elsewhere.

For example, people who try and raise their dogs on a vegan diet can find these dogs sniffing in search of meat – especially if there are cats in the home who are eating meat.

Are All Dogs Nosey?

All dogs are nosey to some degree because of their natural desire to understand their world through their noses. Some dogs will be noisier than others, however, due to a greater number of scent receptors or by situational circumstance.

Dogs’ inquisitive behavior has been bred into them over generations so that they can adapt to their human families as well as survive in unfamiliar territory.

Some dogs have a more highly developed sense of smell than others due to the number of scent receptors that they have.

Dogs with a very high number of scent receptors will be more sensitive to olfactory stimulation than those dogs with a lesser amount.

Breeds With Many Scent Receptors

These breeds are known for having the highest number of doggie scent receptors. These top ten breeds are listed here, with the strongest first:

Dogs with fewer scent receptors won’t be as susceptible to stimulation by odors and scents, although they can still smell way better than we can.

Breeds with a lower number of scent receptors tend to be those with shorter noses because there is less space to accommodate scent receptors. For example:

Can You Stop Your Dog From Being Nosey?

You can never stop your dog from being nosey altogether, but you can diminish this behavior, depending on the reason for it. Sometimes you can significantly reduce nosey behavior, and other times you have to accept that it’s part of your dog’s nature.

Dogs are natural hunters and scavengers, and they are always looking for new smells and different places to explore.

While you may not like having a nosey dog, remember that it’s part of his nature, and you can work to reduce this behavior in certain situations (e.g., training your dog to not sniff at guests), but you can never eradicate it entirely.

When It’s Easier To Stop Your Dog From Being Nosey

If you address any of the following situations, you can reduce the amount of nosy behavior that your dog is displaying:

It’s more difficult to stop your dog from being nosey if:

If your dog is very nosey because he has a highly developed sense of smell, there isn’t much you can do about him wanting to explore his world with his nose.

If your dog is nosey because he’s naturally curious (and usually also highly intelligent), that’s another situation where it can be difficult to try and discourage him from sniffing around.

Highly intelligent dogs will want to understand their world and keep their brains active, so it can actually be detrimental to try and stop him from behaving naturally.

The best you can do to discourage this behavior is to distract him with a game, an interactive toy, or some outdoor exercise (see below).

If your dog enjoys foraging for food, you can use this instinctual behavior to provide extra stimulation when giving him treats or his dinner.

Take some treats or small bits of food and hide them around your house for him to find. Once he’s found them all, he may settle – if he knows there are no more to discover, that is.

How To Stop Your Dog From Being Nosey

The ways to stop your dog from being nosey depend on the cause of the problem. A lack of training, not enough exercise, or not the right food are all situations that can be remedied fairly easily.

If Your Dog Has A Lack Of Training

If you’ve conditioned your dog to think that it’s acceptable for him to follow you around the house wherever you go, he is likely to continue that behavior.

He’ll be used to being able to put his nose into everything because you’ve allowed him to do this up until this point.

If Your Dog Isn’t Getting Enough Exercise

If your dog is being nosey because he needs stimulation, exercise is an excellent way to remedy this situation.

Take your dog for a walk when you notice him being nosey (but be careful that he doesn’t associate sniffing around with getting to go outside.

Otherwise, he’ll think you want him to sniff first before taking him for a walk!)

If Your Dog is a Natural Forager

If your dog loves foraging and hiding treats in your home isn’t enough (see above), you can take him to a lure course to encourage him to use his natural prey drive to burn off excess energy.

Lure courses, frisbee games, flirt poles, and recall games are great sources of stimulation for dog breeds who are prey-driven, such as:

If Your Dog Isn’t Getting The Right Food

If you notice your dog is constantly sniffing around as if he’s looking to eat something, it could be he’s got a nutrient deficiency. Other times, he might just not like his food.

It can be very difficult to tell yourself if your dog is sniffing around because of a lack of nutrients, so a vet visit could be helpful to determine if his diet is right for him.

If his diet is lacking, sometimes a change in diet can cause the nosey behaviour to diminish significantly.

Some are more than others.

And then, there are certain developments in an environment that can take it to the next level.

Rest assured, though, there are some things you can do to help address this behavior.

Noticing other interesting behaviors in your dog? Then my other guides may be of interest: