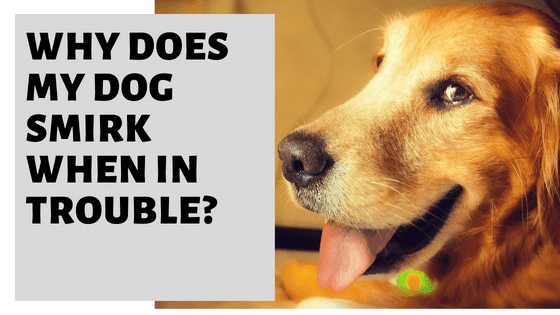 It’s a weird look, isn’t it? The smirk your dog does when he knows he is in trouble. It can be endearing, but it also seems like a bit of a strange response, given the circumstances.  Why do dogs do this, and is it common across all dogs? Can you do anything about it, even? Well, here is everything you are going to want to know.

Perhaps not what you imagined. Well, it wasn’t what I would have thought.

So let’s delve into those reasons in greater detail so that we can learn more about this interesting reaction.

Why Does My Dog Smirk?

Your dog may smirk either out of stress or as a sign of submission, depending on what has just happened. You can tell which is which from your dog’s overall body language.

If in addition to your dog’s smirk you can see his ears are pulled back tightly, he is likely smirking out of stress.

You can also usually see his facial muscles pulling at the corners of his mouth, and his eyes will often be wide with the whites showing.

Looking at your dog’s overall body language, you will likely see his head pulled back far from his neck as if he wants to beat a hasty retreat.

His limbs will usually be tense and stiff, and he will also probably be panting.

A stressed dog can quickly snap if he’s feeling unhappy.

One reason biting incidents happen with young children is because they misinterpret their dog’s smile as an invitation to pet him, when the dog is saying, “I’m stressed, stay away!”

It doesn’t help that a dog can wag his tail in addition to a stressed smirk – which in this case doesn’t mean he’s happy. Dogs sometimes wag their tails as a sign of aggression.

Sometimes your dog will smirk simply because he’s happy and relaxed. You will notice his eyes are soft and his ears are in their natural position.

He will have a happy tail that’s wagging away and a casual grin where his lips aren’t drawn back.

Dogs will often smirk like this after they’ve had a fun session of exercise or games with their favorite people.

Any tension they may have had has been burned off through play, and they are content and relaxed.

Interestingly, recent studies using MRI technology have discovered that dogs have parts of their brains that are equivalent to the parts of our brains that control feelings and emotions.

We now know that dogs experience higher levels of the feel-good hormone oxytocin when we pet them.

Oxytocin makes us happy, too, and is released when we hug a loved one. We will often smile when experiencing happiness, and apparently, so will our dogs!

Some dogs will smirk when they’re in trouble as a gesture of appeasement because they’re feeling uncomfortable. You’ll see your dog’s lips tightly pulled back, with his teeth visible.

His ears will be pinned back, his eyes wide, and his body tense. This kind of smirk, though, is not the same as a snarl of aggression.

A dog smirking in submission is most likely feeling intimidated, so approach this dog carefully if you don’t know him well yet.

If your dog is a rescue and is new to your home, you may see him smirking when he’s in trouble because he’s anticipating a punishment or a rejection.

He may use a shy grin as a way to ingratiate himself towards you, as if he’s showing you he really wants to please you and he didn’t mean to do anything wrong.

Some of us like to project our emotions onto dogs, but there is no evidence that a smirking dog is feeling guilty or remorseful. Dogs can feel other emotions, but guilt doesn’t seem to be one of them.

If you see your dog grinning submissively, chances are he has no idea what he’s done – he just knows you’re unhappy about it. Giving you a submissive grin is his way of trying to defuse your potential anger.

Note: Sometimes dogs are seen smirking in online videos because people film them from above with their phones. Dogs don’t know that video cameras and phones are harmless, so they can get quite intimidated with these unknown pieces of equipment looming over them.

Some dogs have learned that if they “smile” they will get treats and other rewards. Because your dog has a strong desire to please you, he may have noticed you rewarding him for a smile.

Some experts even believe that dogs have spent years analyzing human behavior and learning that a smile can get them what they want.

Sometimes a dog will engage in puppylike behavior (jumping up with a big grin and licking his people) because he knows humans like it.

It’s only natural, then, for him to repeat the smile as a way to get your attention.

Dogs can learn quite a lot, so a dog that has picked up that smiling equals treats may carry on this behavior at any opportunity!

You can tell when your dog is smiling as a way to get treats or praise because his ears, face, and body stay relaxed as he smirks.

Do All Dogs Smirk When In Trouble?

Not all dogs smirk when in trouble, but all dogs have the capacity to smirk for any of the reasons that may cause it.

Dogs have very individual personalities and behaviors, and not all of them smirk when in trouble. In fact, submissive smirking is fairly uncommon, even though it goes back to a dog’s wild ancestors.

All dogs descended from a species of wolves who lived more than 10,000 years ago in Northern Europe.

Wolves being pack animals, they developed a hierarchical social structure, with some wolves being dominant and others being submissive.

A dominant dog will be much less likely to smirk when in trouble. The more alpha the dog, the less likely he’ll be to smirk.

Dogs have the potential for more than 30 body gestures to communicate socially, either with other dogs or with humans.

Turid Rugaas, a Norwegian dog trainer, studied dogs’ behavior in their pack, and she recorded these various gestures and signals.

She postulated that the dogs’ variety of gestures demonstrated their intent to get along with other members of their “pack” – which would include the people in their homes.

Can You Stop A Dog From Smirking?

You can’t always stop a dog from smirking, as this behavior is part of what your dog has learned to survive. You can, however, not encourage it by offering treats or praise when your dog smirks.

If your dog smirking bothers you, consider the cause:

When smirking is a result of learned behavior, it may take some time to unlearn. It can be difficult for a dog to unlearn something that he’s been used to doing since puppyhood.

How To Stop A Dog From Smirking

There are ways to reduce the amount of smirking your dog does by reducing causes of stress, discomfort, boredom, or the need to provide submission.

Here are some tips to reduce smirking:

Remove stressful situations from your home where possible.

If you have young children, teach them how to approach dogs with respect and gentleness.

Give your dog a quiet area where he can retreat to have some peace and quiet when he needs it.

Seek A Vet For Stress

If your dog is exceptionally stressed, you may need to see your vet.

Your vet can provide tailored suggestions to help your dog, some of which may include medication if your dog is very anxious.

If you have a noisy home environment, do your best to provide calm.

Some dogs are more sensitive than others and will need time to rest and recuperate if they’ve been out playing or there have been visitors to your home.

If you reward your dog when he smirks, he will think smirking is what you want.

Don’t punish your dog because that will only increase his fear of you and heighten his stress (which may lead to more smirking).

Most smirking when a dog is in trouble happens when they’ve been destructive, which usually isn’t the dog’s fault.

Make sure your dog has plenty to do so that he doesn’t approach things he shouldn’t out of boredom.

Provide plenty of exercise and interactive toys to stimulate your dog both physically and mentally.

If you know your dog is prone to exploring where he shouldn’t use dog barriers to keep him away from areas where he could cause havoc.

It’s an entirely normal and natural response for a dog to smirk.

Even if it doesn’t seem all that appropriate to us.

That being said, you can actively implement a few strategies to reduce the smirking, should that be something you decide you don’t want to see!

Noticing other interesting behaviors in your dog? Then my other guides may be of interest: