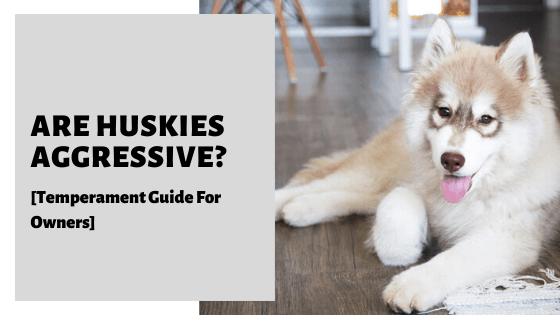 Huskies are striking in appearance – both elegant and beautiful, if not slightly intimidating due to their resemblance to wild wolves. But, what about their temperament? Are they known to be an aggressive breed or one in which could be dangerous? Here is what the research says.

So, are Huskies aggressive? Huskies are not generally an aggressive dog breed. Instead being sweet-natured, playful, and agreeable. With that said, Huskies can act out aggressively in response to certain triggers, such as food possession.

Huskies commonly have a joyful temperament, and acting out aggressively is unlikely and not to be expected.

Instead, they are generally full of energy, friendly, and exuberant.

Let us now take a closer look at the Husky temperament before looking at those potential triggers for aggression.

The Siberian Husky is by nature, a working sled dog that was bred in Northeastern Asia by the Chukchi people.

This breed is therefore used to working very hard while enduring freezing temperatures. This reflects in their personality and temperament.

Typically, the Siberian Husky is a free-spirited canine that is very agreeable with humans.

Like most working dogs, Huskies are athletic and very playful. These dogs need to be outside and active as much as possible.

They thrive on having plenty of daily exercise, especially in cold weather and snowing/freezing temperatures.

This breed simply needs strenuous exercise every day, such as walking, running, and hiking. Most owners often report that their Huskies can, and should run multiple miles per day!

When you take your Husky outside, they must be kept close and on a leash at all times. Otherwise, they are likely to run and chase towards and at anything they see and can chase in their environment.

Huskies are very independent creatures, while being easily distracted and not as eager to please their owners as other breeds.

Getting them plenty of toys to provide mental stimulation and play is an excellent approach and one that can keep boredom at bay. It also helps them to expend what appears to be an endless amount of energy.

With all this being said, Siberian Huskies are known for a very loving and friendly temperament. It makes them excellent companions and a great breed to adopt.

Huskies are friendly towards everybody, including strangers and other dogs. Because of this, they are not suitable as guard dogs.

They are great as pets because they are playful, easy to train, great with children, and compatible with other pets.

With that said, owning a Husky is a big commitment. With all their daily exercise requirements you must be prepared to take care of such a highly energetic dog breed.

Having a backyard, open space, or being close to a lot of challenging walks is ideal.

Many owners often swear by purchasing Ball Launchers and other exercise inducing toys.

This helps to keep them active throughout the day without you necessarily having to take them out.

Can Huskies Get Aggressive?

Huskies are not an aggressive breed, generally speaking. By default, these dogs have very docile natures.

However, there are always exceptions to the rule and all dog breeds can, and will act aggressively at certain times and through certain triggers.

Huskies have been known to bite out of aggression, but this is mostly out of character for this breed. Nonetheless, its important to be aware of it, and look for any potential signs in your dog.

Here are some of the main factors that can trigger aggression in this breed:

As you can see, most of these triggers are not exclusive to the Husky breed. You’ll likely expect and notice this with other breeds too.

Its very important that you train your Husky from a young age, socialize them with other people and dogs appropriately and be sure to establish your dominance as the leader of the pack.

Otherwise, be aware of the above triggers and do all you can to minimize or reduce the likelihood of them from occurring.

Huskies are undoubtedly highly energetic dogs and mostly very gentle. This breed is known as the “dog with a thousand expressions.” They are very entertaining and notoriously comical.

But, are Huskies dangerous? They are not an inherently aggressive or dangerous breed, but as we have seen above, aggression occurs in Huskies as it does with any dog. It is worth closer examination.

Many dog behaviorists will tell you that every dog, regardless of their breed, has the potential to behave well or not.

Either way, their behavior is dependent on different factors. These factors include how they were raised, their life history, and their genetic predisposition.

Unfortunately, dog breeds like Pit Bulls and Rottweillers are typically involved in over half of dog-bite related deaths. Huskies, whilst not so much, have been responsible for some human fatalities.

It is crucial to train a Husky from the earliest opportunity to ensure that they do not attack a person or another animal for any reason.

Unless they were trying to defend himself or someone else, if you conduct obedience with your Husky puppy, they will grow up to become a loyal and affectionate adult dog that can be trusted in the company of others.

In terms of size, Huskies are mid-sized dogs, but they still have the potential to become dangerous.

You must consider that these dogs are very powerful physically and they can endure hard work and freezing temperatures.

When you add this to the fact that they have unlimited energy; this canine can quickly become a threat to those around them.

Their physical abilities must be channeled the right way, an owner must never allow their dog to knock over a child or treat them without respect as this can continue if they are not appropriately taught that such behavior will not be tolerated.

Huskies are not normally aggressive. They have a friendly and playful nature, and it is unlikely that they would ever attack another dog or human being.

In fact, these dogs are actually known to be quite fond of a cuddle, or two.

With all of that said, it is not unheard of for a Husky to behave aggressively and even bite.

Most Huskies are very good with their families as well as with strangers, but adequate training and socialization usually guarantee a reasonably well-behaved and harmless Siberian Husky.

The Siberian Husky was bred initially to be a working dog pulling heavy loads and sleds in the freezing temperatures of Northeastern Asia. Today, this breed is a wonderful companion to any household.

Be prepared for the fact that Siberian Huskies are hyperactive; you must try to match their energy levels, if possible.

With obedience training, your pet Husky will learn to obey your commands and have more control over their actions. Remember to reward good behavior with praise and treats to reinforce consistent excellent behavior.

Are Huskies Aggressive To Small Dogs

Huskies can act aggressively toward small dogs and other dog breeds for that matter. Huskies naturally have a high prey drive and even after training may behave in a way that may seem aggressive to other dogs. Sometimes, a Husky will act in self-defense if they believe the smaller dog is barking, charging, or acting aggressively towards them.

Why Does My Husky Growl At Me?

Huskies are known to growl at their owners for a number of reasons. The most common cause is protecting their food and/or possessions – as they fear that they will be taken away from them. Other causes include fear, uncertainty, enjoyment, and pain. It is therefore important that you observe when your Husky is growling and the specific context.

Why Do Huskies Stare At You?

Huskies stare at people for several reasons. The most common ones include wanting something that a person has (food/toy) or that they are trying to communicate something (like wanting or needing to go outside). Other potential reasons include trying to get attention, expecting a command, being confused, scared, or not being obedient.