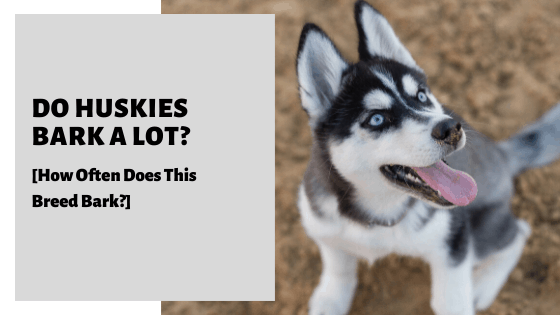 If you are considering the husky breed, you may have some questions regarding their barking behaviors and traits. Does the average husky bark a lot, what are the main causes, what does it mean and how often can you expect them to do so. With these questions in mind, I decided to do some research. I’ll be documenting what I was able to find on the subject here today.

So, do huskies bark a lot? Huskies are not known for their barking. In fact, it’s rare for a husky to bark regularly. The only time they are likely to do so is to initiate play. Barking is often a behavioral trait found in territorial breeds of dogs; something that huskies are not. Instead, huskies are known for making other sounds, such as howling, baying, and ‘wooing’ as a means to express their feelings and to communicate with their owners and others around them.

Huskies are not known as guard dogs for this very reason. While they are quite a vocal breed, they are unlikely to bark at the sight or sound of an unexpected visitor. Its just not in their nature.

So much so, that some owners even consider them as relatively quiet dogs. Instead, they mainly communicate via howling and ‘talking’.

Let us now take a closer look at this breeds behavioral traits and reasons in why they do not commonly partake in barking.

Why Are Huskies Not Barkers

One of the main reasons in why any dog may bark, is as a method of communication.

Its a dogs way of letting their owners know that something is up, or to get attention on them or to something that is happening around them in the environment.

When you think about it, its actually one of the few ways in which they can actually express themselves- and get attention quickly onto whatever they believe warrants it.

Now, some breeds of dogs rely on barking more than others. To some dogs, its in their nature and genetic makeup. To others, its a trained and learned behavior, a pattern in which they recognize works.

Barking can occur for many reasons; it differs by dog and by context.

The main reasons in why a dog may bark are as follows:

The Husky breed actually descends from a working dog; whom supported hunting activities and the transportation of loads across long distances in the arctic. They developed a close bond with their owners, but never required a need to bark often. They never needed to protect but instead, to work.

As such, they are not instinctively a territorial breed; where barking is one of the main behaviors a dog will use as a means to defend and protect.

Huskies do not feel the need to bark to alert you to visitors, or people they are not familiar with. This is the primary reason in why a husky is usually never recommended as a guard dog. They’re just not very good at it!

Alternatively, other dogs will bark as a way to show affection. While some huskies will do this, albeit infrequently, again its not in the nature to do so. Instead, you’ll most likely find them becoming more active and jumping up.

Then there are other reasons a dog may bark like showing distress. For a husky, they rely primarily on whining as a way to express this emotion. This is also true for hunger.

Barking just does not come naturally to a husky; they’d much rather whine, howl or ‘speak’ to get their point across!

What Does It Mean When A Husky Barks?

While barking is not common in huskies, this does not mean that they do not do it or something is necessarily wrong if they do. As mentioned up above, barking is of course a method of communication.

If your husky is barking, it is most likely to be due to one or more of the following reasons:

One things for sure, every dog (regardless of breed) has their own unique personality and behavioral traits. While some huskies will howl regularly, others others not so much. Some will howl instead, others will talk. The same is true for barking.

Ultimately, some huskies will bark to express themselves and to communicate. It may not be anything serious or mean anything in particular.

With this being said, there could be a problem and there may be some further investigation required.

First and foremost, if you see a sudden change in their barking behaviors this could be a red flag. Equally, if they have other accompanying behavioral changes, or are showing signs of injury it could suggest they are in pain.

In this context, you may need to consult a vet for an examination. They may be hurt and require treatment to resolve the issue and to alleviate the barking.

Essentially, you need to monitor when, how and the type of barking your husky is doing. See if you can discover any events or causes for the barking; try to discover what the barking could mean.

A lot of it is context specific.

So, if you have recently arrived home it could be all okay. This could just be their excitement coming out.

However, if you noticed regular barking at a specific time or location, there could be a problem in the environment or in the lifestyle of your dog.

In the beginning it is a challenge to identify what the issues could be. This is why you need to remain vigilant and monitor when your dog barks, the context, how your dog responds etc. Keep notes in a journal or diary which you can relate back to later.

In doing so, in time you will be able to foresee issues and become aware of your dogs own unique issues and triggers.

Other Noises Huskies Make And Why

These are the other noises huskies are known for, what they mean and why they do it:

Whining and crying often occurs when huskies want something from you or in their environment. Its usually high pitched and they only usually cry/whine for a short amount of time.

Huskies are notorious for their howling. This is an instinctual behavior, in which they have been doing for thousands of years. Its actually their main and preferred form of communication.

Howling is usually quiet loud, done so for an extended period of time and easily identifiable.

Howling is most common in bored huskies, but they also do so if they hear other dogs howling too. Its like a call out to other dogs and as way to communicate and greet them. They are in many ways selling hello and telling other dogs where they are.

Howling tends to cascade for miles, so you can imagine what this may sound like if your dog does this from your backyard!

How Often Do Huskies Bark?

Huskies are not known for their barking and the average husky will do so infrequently. Instead, this breed of dog is much more likely to howl and talk to communicate. However, some huskies bark more than others and they most commonly will do so to initiate play, get something they want, or if they are suffering from fear, separation anxiety, or require more exercise.

Do Huskies Bark At Strangers?

Huskies are not likely to bark at strangers. Instead, they are much more likely to be excited, friendly, and willing to meet them. This makes them ideal for when friends, neighbors, and family members come to visit, or you meet somebody out at the park, but not so ideal if you have an intruder set foot on your property.

How Can You Reduce Barking In A Husky?

To reduce barking in a husky, you first need to identify the causes. From there, you can look to prevent the situations or circumstances from arising that set your husky off. Obedience training may be required – which is preferable to do while your dog is still young and as a puppy. However, some barking is to be expected with any breed of dog and you cannot nor should not try to eliminate it entirely.