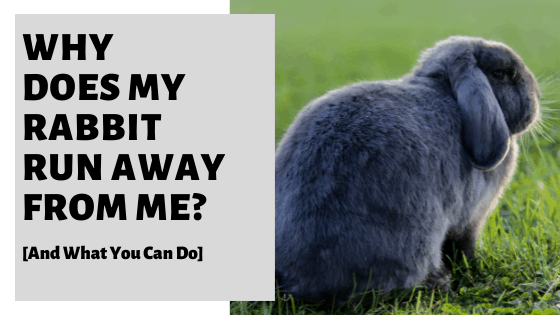 Rabbits are instinctive and clever creatures and, like other animals, can show many kinds of behavior that at times can baffle us humans. For example, why would your pet rabbit run away from you? Don’t they know how much you love them? Well, let’s take a look at what you’ll want to know about bunnies making a run for it when faced with their loving owners.

So, why does my rabbit run away from me? Rabbits are prey animals, and they often run away when they are angry or frightened. They can also run if they are confronted with something that they don’t want to do, which includes you putting them back in their hutch or enclosure. Rabbits learn from experience so running away is behavior they have developed to help them feel safe.

Spending more time with your rabbit, building trust, and making them comfortable can make all the difference from overcoming this undesirable development.

But it’s going to take a little time and patience.

And you need to be mindful about your approach.

They learn quickly and will recognize patterns.

Particularly when being picked up and taken inside to a smaller space.

Like small children, they don’t always want to cooperate when playtime is finished!

Neverthless, let us explore the reasons for this avoidance and then look at an effective response to overcome it.

Reasons Why Rabbits May Run from Their Owners

There are several reasons why rabbits may run from their owners. Let’s examine them here.

Your Rabbit Isn’t Used to People

Your rabbit may not be used to people, perhaps because they aren’t used to receiving affection from humans.

Wild rabbits are hardwired as prey animals to fear humans and other larger creatures who are potential predators.

Domestic rabbits can be friendly when socialized at a young age, but your rabbit may have learned that people are scary.

Although most of us think of rabbits as cuddly pets, most rabbits don’t actually like to be held. Being picked up is scary for most rabbits because they can’t run away if they sense danger.

They can feel trapped since their primary method of defending themselves is to run and hide.

You may need to interact with your rabbit on their terms for a while, which could include not picking them up as much as you might like.

If you usually try to get your rabbit into a corner to pick them up before putting them back in their enclosure, it’s only natural that your rabbit will learn from this and feel trapped.

They will then do their best to run away when you approach. A rabbit’s instinct is to find an escape route.

Rabbits are clever creatures who learn from your behavior and body language. So when you approach with your hands out, they know what’s coming – the end of free time!

Your Rabbit Is Angry

You may be surprised to hear that rabbits hold grudges!

If your rabbit feels that you haven’t paid them enough attention or given them a desired treat, they can get angry with you and want to avoid you.

My rabbit definitely let me know when I hadn’t given him enough treats – he would ignore me for hours!

Think about what you could have done to offend your rabbit – they really are sensitive creatures.

How Do You Know if Your Rabbit Doesn’t Like You?

If your rabbit is unhappy with you, they can let you know – not only by running away, but also by ignoring you, not wanting to be handled, or freezing.

Usually, though, these behaviors don’t mean that your rabbit doesn’t like you personally. Unlike some other pets, rabbits can take weeks to warm up to their owners.

It may just be that your bunny needs more time to get used to you.

Rabbits can also be unfriendly because of other factors like sickness, recent changes in their environment, increased stress, or perhaps some loud noises or strong odors.

Make sure your rabbit isn’t ill – check for common symptoms of sickness in rabbits such as:

Has Your Rabbit’s Environment Changed?

Have you moved your rabbit recently? Has there been the addition of a new pet or another family member?

Have you changed your working hours?

Rabbits can become quite distressed with changes in their circumstances or physical environment, so it may be your bunny needs time to adjust.

Are There Loud Noises or Strong Smells?

Have there been any loud noises?

Perhaps by workers in the house or outside? Are people visiting who are louder than your rabbit is used to, such as younger children?

Have you been handling another pet right before touching your rabbit?

If you carry the smells of a cat, dog, or another animal, that might be enough to frighten your rabbit as they have sensitive noses that are alert for the scents of other predators.

Some bunnies don’t even like the smells of hand lotions or perfumes, so consider what you put on your hands before approaching your bunny.

If Your Rabbit Still Doesn’t Seem To Like You

If there aren’t any of the above situations that seem to fit and you still think your rabbit doesn’t like you, it may be that they are simply frightened or stressed.

Let’s look at why that is and what you can do about it.

How Do You Calm A Scared Rabbit?

A scared rabbit can be calmed with proper care and subtle changes to its environment. Ensuring your rabbit feels safe and secure and any causes of stress and anxiety are removed is essential.

Rabbits are small and sensitive creatures, so you need to be particularly careful.

But you are also going to want to act promptly.

It’s crucial to help your rabbit feel safe and secure, not only because you love them, but also for their health.

A frightened rabbit can go into shock and even become unresponsive

Here are several ways that you can calm your scared bun.

Move Your Rabbit To A Safe Place

Immediately bring your bunny to a place where they can feel safe, ideally somewhere that’s familiar to them.

Some rabbits can get frightened just because they’ve been exploring somewhere new, so this is a quick and straightforward way to help them calm down.

Another thing you can do is wrap a cuddly towel around them as a kind of nest they can snuggle into. A towel comes in handy if your bunny doesn’t seem to settle.

Be sure there are no loud noises, and keep other pets away (except for any rabbit friends). Make sure that your bunny has a place to hide if they want to.

You can also try covering your rabbit’s eyes and ears to lower the number of outside stimuli for your bunny.

Stay With Your Rabbit

Stay with your bunny: if your rabbit feels close to you, this is even more essential.

If your bunny usually spends a lot of time with you, they have likely developed a sense of trust. Your quiet and supportive presence can calm them.

Sit near them but don’t make them come to you – let them approach you if they want to.

If your bunny does come to you, you can slowly pet them to help them calm down. Watch your pet’s body language to see if your strokes are having a calming effect.

Talk to your bunny softly – they’ll recognize your voice.

Offer your bunny a treat that you know they’ll love. A treat can distract your bunny so that they forget they were scared.

It can also be useful to offer a treat if petting doesn’t work.

You could try a puzzle toy with food hidden inside as another way to get your rabbit thinking about something else other than their fear.

What Do You Do If Your Rabbit Is Scared of You?

If your rabbit is scared of you, there are several things you can do to help the two of you bond.

Avoid Picking Up Your Rabbit At First

Since rabbits don’t usually like being picked up, you can make your time with your bunny more calming and effective by sitting with your rabbit and stroking them.

If your bunny doesn’t let you stroke them at first, just sit near them quietly. Let your bunny come to you in their own time.

You might have been unwillingly making noise or a sound that frightened your rabbit, so sit and let them recover.

You could try turning your back to them and pretending to ignore your bunny. You want your rabbit to see you as a friend rather than as a threat.

Spend More Time With Your Rabbit

The more of your time that you can spend with your rabbit, the closer your bond will be, as your rabbit will trust you and will become familiar with your voice, your movements, and your smell.

You’ll also get to know your rabbit’s body language, including their vocalizations, of which there are many!

Rabbits have many sounds to express comfort and contentment as well as anxiety, fear, a need for attention, anger, or pain.

Most rabbit hutches and enclosures tend to be too small for rabbits to feel comfortable and happy there when compared to running around freely in a yard.

By expanding your rabbit’s enclosure, they will be more content to be there and won’t be as likely to put up a fuss about going back inside at the end of a day spent hopping about freely.

You can try using something like a pet playpen instead of a typical rabbit hutch and fill it with rabbit-friendly accessories like wood toys, nibble sticks, and of course, a covered place to hide.

It’s never a nice feeling when your pet rabbit runs away from you.

Besides, this is not what we had in mind or expected when we first got them.

But rest assured, with a few subtle changes and with a little time, you can turn this around.

And before you know it, your rabbit will be doing the opposite – they’ll be following you!

Wondering why else your rabbit does other interesting things? Then my following guides may be of help!