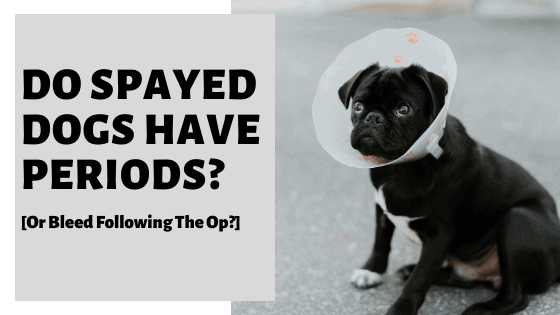 Whether you are a first-time dog-owner or have recently had your female dog spayed, you may have wondered if your dog will still have her period after the procedure. Not a nice question but an important one nonetheless. After researching the topic extensively, here is what you need to know.

So, do spayed dogs have periods? Spayed dogs do not have periods but may bleed post-operation as blood from the procedure works its way out. This should stop after a few weeks. However, prolonged bleeding may result due to surgical complications, or conditions left untreated such as vaginitis or infection.

The truth is some blood is entirely normal and should be expected.

However, excessive blood or that continues long after the surgery typically means something wrong, and veterinary intervention will be required.

Either way, its imperative to monitor a dog closely following this procedure.

And while a period is completely normal for a non-neutered dog, it’s important to be aware of different reasons why your dog may still bleed despite being spayed.

Some of which can be completely normal while others are much more of a cause for concern.

This article will cover why your spayed dog may be bleeding and when you should contact your local veterinarian.

Do Female Dogs Still Bleed If They Are Spayed?

A period is a normal part of a non-neutered female dog’s reproductive cycle. Once spayed, female dogs shouldn’t bleed from their vagina as a general rule.

While entire (non-neutered) female dogs don’t experience a menstrual cycle the same way humans do, it is completely normal for them to produce some bloody discharge from their vulva when they come into heat.

This process is driven by the sex hormone estrogen which is produced by the ovaries.

Heat, also known as estrus, generally lasts between six and twelve days in most dogs.

When dogs are spayed, their ovaries are removed along with the source of estrogen.

Therefore, spayed dogs shouldn’t come into heat or produce blood as a result of their cycle.

However, there are other reasons why your female dog might bleed that you need to be aware of.

What Would Cause A Spayed Female Dog To Bleed?

There a few reasons why your dog might be bleeding despite being neutered.

Regardless of the cause, it’s always best to get in touch with your local veterinarian in case your dog needs treatment.

If your dog has been spayed recently and is producing a little blood from her vulva then this can be completely normal.

Some post-operative bleeding can occur as any small amount of blood created during the procedure works its way out.

If your dog is well in herself and isn’t producing vast amounts of blood then this is generally nothing to worry about.

Post-operative bleeding should stop after a few weeks.

If you are noticing large amounts of fresh blood after the procedure then this could indicate that there is an active internal bleed, contact your vet immediately if this is the case.

In extremely rare cases, the procedure involved in spaying your dog might not be a complete success.

If any remnants of ovarian tissue are left behind then your dog may develop a condition known as ovarian remnant syndrome.

This is when small amounts of ovary remain inside your dog which can then connect to a blood supply and release estrogen, resulting in signs of heat and sometimes bleeding.

Dog spaying is a routine procedure that many vets perform on a regular basis – so the odds of this happening are very slim.

But If you think your dog is still showing signs of being in heat despite being spayed then speak to your vet.

Various tests including ultrasound scans and hormonal blood tests can help diagnose ovarian remnant syndrome; it is treated by surgical removal of the remaining ovarian tissue.

Vaginitis is another potential cause of bleeding in a spayed dog.

In most cases this blood will be accompanied by nasty pus-like material, indicating that a bacterial infection is present; there may also be a strong smell.

Your dog may require antibiotics and anti-inflammatory medication if this is the case.

It is also easy to confuse blood coming from the vulva with blood in your dog’s urine.

What can appear like your dogs’ period might be blood in her urine, indicating that she has a urinary tract issue such as cystitis or a water infection.

Monitor her urination habits carefully and take a urine sample to your vet to help confirm this.

Spayed dogs typically do not show signs of being in heat – the hormone estrogen, which causes this change has been removed. However, in the rare case of ovarian remnant syndrome, a spayed female dog may still display symptoms of heat after the operation because this hormone is still present.

Heat, or estrus, refers to the changes that a female dog will display when she is ready to be mated.

Estrogen is the hormone that initiates heat (estrus) and when a spay procedure is performed, the source of this oestrogen is removed.

Therefore, spayed dogs shouldn’t show signs of being in heat because the hormonal drive to mate is no longer present.

However, as we have mentioned above, in the rare case of ovarian remnant syndrome your spayed female dog may display symptoms of heat after the operation.

This is because even a small fragment of ovarian tissue left behind will produce oestrogen.

Signs of heat include:

If your dog is displaying these signs after being spayed then see your local veterinarian as she might have ovarian remnant syndrome.

Do Female Dogs Change After Being Spayed?

Having your female dog spayed will not only lead to physical changes but can result in behavioural changes too.

Many owners worry that their female dogs’ temperament might change after they are spayed whilst other owners might be hoping that their energetic puppy will calm down after the procedure.

The truth is that is impossible to predict how your dog’s behavior might change or if they will even change at all.

At this point the sex hormone estrogen initiates the reproductive cycle and leads to the signs of heat mentioned above.

By removing the source of estrogen your dog shouldn’t exhibit these types of behaviors.

Spaying usually won’t affect your dog’s playfulness or personality as these behaviors aren’t mediated by estrogen.

Similarly, spaying a female dog usually won’t fix any behavioral issues that she might have.

Behavioural changes will only come about through disciplined training, so if your dog is misbehaving then consider taking her to a qualified trainer.

In addition to potential behavioural changes, there are many physical changes that will occur within your dog, many of which are beneficial.

In addition to preventing unwanted puppies, the medical benefits of spaying eliminate the risk of the following conditions:

If you’re not thinking about breeding your dog and having puppies then most vets would recommend getting your dog spayed.

While there are risks involved with the general anesthetic and procedure itself, the benefits of spaying far outweigh these risks.

Spaying should primarily be done for the health benefits and prevention of the conditions mentioned above; there is never any guarantee that your dog’s behavior will change after the procedure.

There are many reasons why you would want to get a dog spayed.

Preventing bleeding is likely one of them.

So its only natural to concern whether they still can bleed after this procedure.

The truth is, it depends.

If the operation went to plan and no other conditions developed as a result, chances are your dog should no longer bleed.

Should being the important word here.

There is always the possibility they may – either in the immediate realm of time following the operation, or longer after.

And if they do bleed, chances are you will not be able to detect why.

This is why it is so essential to monitor a dog so closely after being spayed and to seek out professional veterinary advice if you notice it following this procedure.

And the earlier, the better.