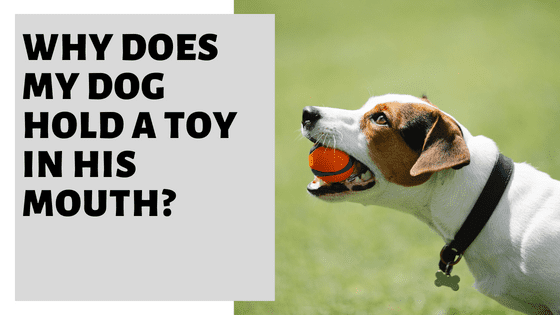 They’re holding onto it a little too long, are they? That toy you gave them. Now it seems to almost permanently sit in your dog’s mouth. But why do dogs do this? Is it something to be worried about or even stop? And if you should stop it, how would you even do so? Well, these are the questions I am going to be answering here today.

So, why does my dog hold a toy in his mouth? Dogs typically hold toys in their mouths either out of instinct or as a source of comfort. Sometimes dogs will become too possessive, and other times they carry toys because they’re ill, bored, or anxious. Young dogs may be seeking relief from teething.

Which can make it a little challenging to identify why your dog may be doing it.

So let us take a closer look at each cause further to help differentiate between them.

Then we will be looking at those responses, I promise you.

Reasons Why A Dog May Hold A Toy In Their Mouths

Your dog may hold a toy in his mouth out of habit, because he’s teething, or perhaps he’s ill. Boredom and anxiety are other common causes.

Your Dog Is Behaving As A Wild Dog

Dogs carry over a lot of behaviors from their wild dog ancestors, and one of those is carrying things in their mouths.

Wolves, for example, will carry prey that they’ve caught back to their den in order to eat it safely or to share it with pups.

Wild dogs do what’s necessary to keep their kill safe from other predators.

Your dog usually sees you as his pack leader, so he may be picking up toys and carrying them to you to gift to you as a sign of respect.

Your Dog Is Behaving As He Has Been Bred To Do

Hunting or retrieving breeds are even more likely to carry things around in their mouths because they have been bred to do so.

Foxhounds, Golden Retreivers, or Beagles are just a few of the breeds who have been taught to pick up their owners’ kills and bring them back.

If you have a breed like a Chihuahua or a Pug, he may be less likely to carry around toys as prey. Other reasons may be responsible (see below).

Your Dog Is Teething

If you have a puppy, chances are he’s carrying a toy around because he’s teething.

Your Dog Is Possessive

Sometimes a dog will carry around a toy in his mouth because he doesn’t want anyone else to get it.

This can often happen in households with several dogs or other animals.

If your dog considers his toy to be valuable, he won’t want other dogs to get it.

Your Dog Is Bored

Boredom can be another reason why a dog may carry around a toy – mouthing a toy gives him something to do.

You Have Rewarded Him For This Behavior

It could be you have inadvertently rewarded your dog for carrying around toys. It does look cute, after all!

Even a pat on the head or some affectionate words to your dog may encourage him to carry a toy around because he thinks it pleases you!

Your Dog Is Feeling Anxious

Dogs may hold items in their mouths to help them feel less anxious. It can be very comforting for a dog to carry around a favorite toy.

Your Dog Is Ill

There are some types of illnesses that can cause dogs to carry toys around in their mouths for much of the day (see below).

Should You Stop Your Dog From Holding Toys in Their Mouths?

As long as your dog isn’t harming himself or becoming aggressive about his toys, there’s no reason to stop him from holding toys in his mouth.

If Items Are Being Used As Toys

Most of the time, whatever your dog has chosen to carry around is probably harmless.

There are some items, however, that your dog may see as a toy to carry around but that are best left alone, such as:

If You Think Your Dog Is Bored

If you think your dog is bored, you’ll want to address that right away.

Dogs need lots of physical and mental stimulation to be happy (see below).

If You Think Your Dog Is Being Possessive

If you suspect your dog is carrying around a toy because he’s being possessive, you don’t need to do anything about it unless he shows signs of aggression, such as:

If You Think Your Dog Is Teething

If you suspect your dog is teething, you won’t want to stop him from carrying things around in his mouth if he needs to chew.

You’ll simply want to make sure he’s chewing on things that are appropriate for teething puppies, such as:

If You Suspect Your Dog Is Ill

Sometimes a female dog will carry around a toy and mother it as if it’s her puppy.

This behavior can be harmless, but in some cases an intact female can develop a false pregnancy.

Most false pregnancies are nothing to worry about as they go away on their own within 2 to 3 weeks, but sometimes there can be other signs that indicate a uterine infection which can be life-threatening called pyometra.

Anxious dogs may derive comfort from carrying around a toy in their mouths.

If your dog is feeling a little anxious and wants to carry his toy for that reason, there’s no need to stop him from doing this provided the toy is a safe one.

However, if you see more severe signs of anxiety, you will want to help your dog deal with that first.

Ask yourself the following questions:

What To Do About Your Dog Holding Toys in Their Mouths

What to do about your dog holding toys in his mouth very much depends on the reason why he’s doing it.

If your dog does this because he thinks it pleases you, you don’t need to do anything about it unless you want to.

If you do want your dog not to carry around a toy quite so much, and you suspect it’s because you’ve rewarded him for it, stop rewarding him and the behavior should diminish on its own.

Ignore him when he carries a toy around, and reward him when he does what you want him to do.

You can try teaching him the ‘drop it’ command and rewarding him when he complies.

If You Think Your Dog Is Being Possessive

If you think your dog is being overly possessive to the point of being aggressive, you’ll want to take some steps to diminish this behavior.

Here’s what you can do:

If You Think Your Dog Is Bored

If you suspect boredom is the cause of your dog carrying a toy around all the time, here are some things you can do to help him:

Make sure your dog gets enough aerobic exercise (at least 30 minutes a day).

Try to give your dog high-energy workouts such as running or swimming every day.

If your dog also gets anxious when you leave the house, schedule these workouts right before you have to leave so that he’s tired and will be more likely to rest.

Play interactive games with your dog.

Fetch, tug-of-war, and other games are excellent for increasing your bond with your dog.

Your dog’s highly developed sense of smell means he’ll really appreciate new odors, so vary your walks as much as possible. He needs to see new things, too.

Time Off The Leash

If your dog likes playing with other dogs, give him time to do that off-leash.

Dogs are social creatures, so they need interaction with others.

Some dogs need the company of other dogs more than others, so if this is your dog, make sure he sees canine friends each day.

Offer him things to stimulate his mind, such as food puzzle toys (see more about those below).

Dogs are intelligent animals and they appreciate a challenge.

You can also hide small piles of kibble around your house for him to play hide and seek.

Give your dog a variety of things to chew on and lick.

Chewing and licking can help dogs feel calmer as well as provide them with added stimulation. Choose items that are meant for dogs so that they’re safe.

Dogs appreciate learning new skills and games to practice with you.

Find some dog sports in your area.

There are things like freestyle dancing, flyball, agility, and other dog sports, which provide the added benefit of socialization.

If You Suspect Separation Anxiety

Here’s how to help a dog with separation anxiety:

If your dog’s anxiety is mild, try counterconditioning.

Counterconditioning teaches your dog to associate positive things with what he fears or dislikes: in this case, being on his own.

For example, when you leave the house, offer your dog a puzzle toy filled with food (such as a Kong toy with peanut butter or another treat).

Make sure it will take him at least 20 to 30 minutes to get out all of the food.

You can even freeze a stuffed Kong toy so that it takes him even longer to get all of his reward.

When you get home, remove the toy. Only offer it to your dog when you go out.

If your dog has a more severe case of separation anxiety, you’ll need to employ a complex desensitization program.

Highly anxious dogs won’t eat when their owners are out, so you’ll need to get your dog gradually used to being by himself in very small increments of time.

This process can take many weeks – you’ll find a detailed description here.

There are other things you can do to help your dog while he gets used to being alone, such as:

Most of the time, it’s not something to worry about.

Then again, it could be a sign that something is up with your dog.

So be mindful and observant, and if in doubt, do contact a vet.

It shouldn’t come to that, but sometimes, it’s simply better to be sure.

Related guides you may want to read: