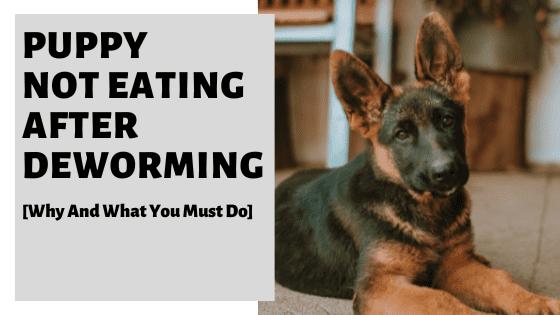 You’ve followed the deworming instructions to the letter or even gone to the extra step in getting your puppy dewormed at the vet. Only to find that since your puppy has refused their food. It’s concerning right. But is this normal behaviour, how long is It likely to go on and what can you do to increase your pup’s appetite? Well, these are the very questions that we will be answering here today.

So, why is your puppy not eating after deworming? Puppies can refuse food after deworming medication because of the effects of the medication, which can cause an upset stomach. Some puppies can experience vomiting or diarrhea, either of which won’t tempt them to want to eat.

In fact, it is somewhat expected that a puppy’s appetite will be affected by medication like this.

Let us continue to explore why before turning to what you can and perhaps should do to get them back on track.

Why Is My Puppy Not Eating After Deworming?

Your puppy is probably not eating after deworming because of the medication he’s been given. Common side effects apart from not wanting to eat include vomiting and diarrhea, any of which can cause your puppy to forgo his food temporarily.

Even if you don’t see any of the signs below, your puppy could still have an upset stomach and not want to eat.

Although deworming medication is essential for your puppy, it causes all parasites in the intestine or stomach to die at once.

Therefore, the lining of the intestines and the stomach walls will become inflamed, and your pup won’t want to eat.

Many puppies vomit after being given deworming medication – your puppy may be feeling nauseous as the pill reacts with the acids in his stomach.

He may vomit to try to get rid of the medication.

Even if your puppy hasn’t been given deworming medication in tablet form, he may still be nauseous and want to throw up.

As the worms die, they release toxins. Because the body wants to expel these toxins, vomiting is one way to do that.

Of course, if your puppy has received a deworming treatment as a tablet and has vomited it up, you’ll need to see your vet for another treatment.

If your puppy is vomiting, be sure he has access to fresh water so that he can replace the fluids he loses by throwing up.

Your puppy will also need extra water because it’s likely he’ll be drooling more than usual as his stomach turns over. The drooling reaction is a bit like us when we salivate before throwing up.

It’s essential to provide plenty of water for your puppy so that he doesn’t get dehydrated, which can be fatal.

The Effects Of Diarrhea

If your puppy is experiencing diarrhea, he will likely not want to eat. Diarrhea from deworming treatments is commonly caused by the body secreting excess fluids to expel the worms.

When the medication kills the worms, they fill up the intestine. The body then uses excess liquid to flush out the intestine, hence diarrhea.

As with vomiting (see above), diarrhea uses up a lot of fluids, so be sure that your puppy drinks plenty of fresh, clean water.

Is It Normal For A Puppy To Not Eat After Deworming?

Given the effects of deworming medication (see above), it is entirely normal for a puppy not to want to eat after deworming. Most puppies are back to normal within 24 hours. However, there are some cases where you will need to visit the vet.

You will need to monitor your puppy carefully if he doesn’t want to eat.

Unlike adult dogs, puppies don’t have the fat reserves to go without food for longer than 12 hours without causing a serious risk to their health.

Toy breeds, in particular, are prone to severe drops in blood sugar (hypoglycemia) that can be life-threatening.

If you see any signs of weakness or trembling and you suspect low blood sugar, rub some honey on your puppy’s gums and take him to the vet as an emergency.

Make sure your puppy is drinking water: puppies are also more prone to dehydration than adult dogs.

Most puppies will pick up their appetite again within a few hours.

If your puppy has had no food at all by the time 12 hours have gone by, it’s time to go to the vet.

When To Go To The Vet

There are some instances in which the length of time your puppy is refusing to eat is a cause for concern. See your vet if your puppy:

Even if 12 hours haven’t gone by without your puppy eating, if at any point you are concerned about his well-being, take him to the vet or give your vet a call.

How Long Will a Puppy Not Eat After Deworming?

In most cases, a puppy won’t eat after deworming for up to 12 hours. Most puppies recover their appetites before then unless there’s another problem.

What Happens Most of the Time

Deworming medications will usually kill off the worms within 12 hours.

The medication has its strongest impact at the start because all the parasites die at once, and the digestive tract becomes inflamed.

Within a few hours, your puppy’s system should start to return to normal, and your puppy will want to eat.

What Can Happen (Rarely)

If your puppy still refuses food several hours later, you will want to do your best to get him to eat (see below).

Because puppies can lose vitality quite quickly if they don’t have food, make sure it isn’t just the deworming medication that’s the issue.

It could be an unfortunate coincidence that something else is happening: coincidences like these are rare, but they do happen.

Some other instances that can cause a puppy to not eat include:

Obviously, it would be an unfortunate coincidence for any of the above problems to have occurred at the same time as your puppy is dealing with the deworming medication.

But it’s best to be safe rather than sorry where puppies are concerned.

What To Feed A Puppy That Won’t Eat After Deworming

Because your puppy may not be feeling his best, you want to feed him food that is tempting yet easily digested.

Here are the best things to feed your puppy if he won’t eat after deworming.

These foods are all things you can offer your puppy at home, and they are gentle on his digestive tract:

Note: No matter which method you choose, begin with a small amount to make sure your puppy tolerates the food. You don’t want him to vomit it back up again.

This may even be an opportune time to transition your puppy over to a premium whole dog food, such as Sundays for Dogs.

How Can I Increase My Puppy’s Appetite After Deworming?

You can increase your puppy’s appetite after deworming by making his food as tempting as possible. Fortunately, there are lots of ways to do that.

Here are several things you can do to increase your puppy’s appetite:

Offer your puppy bone broth. Warm bone broth smells delicious to your puppy, and it’s easy to digest. It provides lots of nutrients with little to no fiber.

If you are making bone broth yourself, let it cool in the fridge first so you can skim the fat off the top before reheating and serving.

Moisten your puppy’s regular food with bone broth, chicken or beef broth, or warm water. Some puppies enjoy gravy, and the warm liquid will make the food smell stronger.

Try different canned foods, or add a bit of canned food to your puppy’s kibble.

Canned food has higher water content, offering some extra hydration. You can heat canned food for a few seconds in the microwave to help release more of the aromas (make sure the food isn’t too hot).

Be sure your puppy is fully awake and alert to avoid the food going down the wrong way.

Encourage your puppy to drink liquids, as the water will help him feel better as toxins are released.

You can add an ice cube to his water bowl or have him lick water from your hand.

Read more: Puppy Won’t Drink Water [The Causes & What You Should Do]

If your puppy isn’t eating after deworming, first and foremost, try not to panic.

It is in fact, more common than you may want to believe.

That being said, if this food aversion goes on for longer than 24 hours, it’s certainly worth contacting your vet.

In the meantime, try those recommendations above to increase your pups appetite. You may just find that with a few minor alterations, they begin eating again.