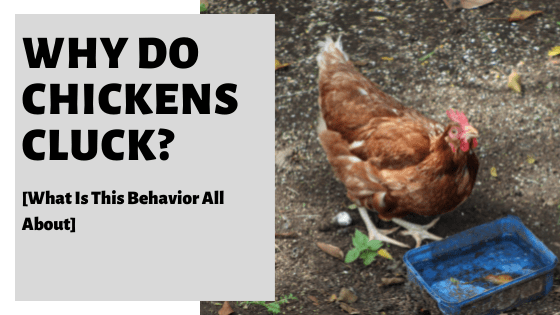 Clucking. Perhaps the noise that chickens are most recognized for. Besides, they do seem to do it a lot! But why? What is the reason for this particular sound, and what does this all mean? Here is what you want to know.

So, why do chickens cluck? Chickens cluck as a means of expressing themselves – it is how these birds communicate. Therefore chickens will cluck at any time they want to express something to the rest of the flock. For example, an egg has been laid; a predator is nearby; they have fallen sick, all of which are the most common reasons.

It’s, in many ways, the same thing.

Well, it’s quite different, but the intentions are the same!

Understand your chickens’ behavior and needs and learn a whole host of other essential chicken-keeping best practices.

This comprehensive eBook covers it all.

Let us now take a closer look at this particular behavior so you know exactly what to expect from your flock and, more importantly, how to respond.

What Is Chicken Clucking?

Clucking is the term used to describe the noises and sounds that chickens make. It’s onomatopoeic (meaning this word imitates, resembles, and suggests the sound that it describes).

So, the sound of a cluck is exactly how it looks on paper.

And any chicken keeper will be quite familiar with it.

It’s what they use to express, notify or even warn other chickens in the flock of a recent development.

Either in the coop, the run, or somewhere close outside.

But, it’s how they cluck that indicates the meaning behind the noise.

This is why it is so important to listen closely to any clucking.

Single loud clucks, for instance, generally mean danger is nearby. It is generally followed by anxious behavior and posture too.

Whether the hen is about to lay the egg, has just laid the egg, or wants access to a particular nest box.

And quite impressively, clucking is not the only noise chickens make.

They have been known to growl (when animated and defensive) and purr (when relaxed) too!

When Do Chickens Start Clucking?

Chickens will begin to cluck around 8-16 weeks of age, depending on the breed. Before then, a chick’s vocalizations will predominantly be higher pitched peeping sounds.

At around 8-16 weeks, you should start to notice that your chicken’s sounds begin to deepen.

But why the range?

So, the development of clucking typically coincides with their general growth patterns.

Some keepers report that their chickens are still peeping at 16 weeks, and this appears to be somewhat normal among particular breeds.

Why Do Chickens Cluck After Laying An Egg?

Chickens cluck after laying an egg for multiple reasons. However, protecting the eggs from predators and announcing her whereabouts to the rest of the flock are hypothesized as being the main ones.

Laying an egg is a big moment for a chicken.

And what better way than to announce it to the world.

And they’re not shy about it either.

Chickens have been known to make noise for up to 15 minutes in the aftermath of a successful lay.

So much so, you will often see this broadcast referred to as the ‘egg song.’

It varies by bird and by breed, and some chickens are certainly more vocal than others with it.

Nevertheless, clucking after egg laying is a topic of much debate in the chicken-keeping community.

Whether it is done as a means of status and bragging to the flock, to help the flock find her, or even as a means of notifying the roosters, she will soon be ready for mating.

All of which are plausible.

All of which are probably true to some extent.

How Do You Stop Chickens From Clucking?

Stopping chickens from clucking entirely is unrealistic and unfeasible in most cases. Besides, it may even have adverse effects on their well-being. However, there are some things you can do as a keeper to minimize the noise and even prevent it a little to some extent.

In reality, chickens need to be able to express themselves.

And clucking is an instinctual behavior and one that comes entirely naturally to them.

However, as keepers, noise can soon become a problem.

Especially if it is is very early in the morning, you have particularly vocal birds, or you have nearby neighbors to appease!

Thankfully, there are a few different things you can do to reduce the noise!

Let us now explore each option:

This one will take a little work and perhaps even a little construction, but many keepers swear by its effectiveness.

A blackout box, as it sounds, is a container or even converted coop that prevents all light from getting in.

Some keepers have even been known to convert dog kennels!

Of course, it needs to be well-ventilated, sufficiently spacious, and placed in an appropriate position – out of direct sunlight is essential.

You also need to ensure your chickens do not overheat.

Whether you transfer your chickens to the blackout box each evening or design the coop in such a way that it is effectively a huge blackout box.

Ultimately, the key to a blackout box is complete darkness.

This way, your flock is much likely to ‘sleep-in’ to a much later, more practical time.

Secondly, you should consider where you position the coop.

Of course, the further the distance from your house, the less chance you will hear your birds.

Just remember the ideal coop location should be safe from predators, be on sturdy ground and provide access to fresh grass and dirt for dust baths!

A lot of the more expensive coops may come with insulation and soundproofing as standard, but many DIY coops and cheaper alternatives often lack in these areas.

The result is that a lot of the noise your chickens generate can easily pass out of the coop and be heard.

Thus, improving on the insulation (being mindful not to overheat your birds) and installing some soundproofing material can help dampen the noise your flock makes.

This is the kind of product you need to get from Amazon. Plus, it serves as a blackout too! Win, Win.

Automatic doors are a godsend!

While your chickens will still continue to cluck and make noise at the start of the day, chances are this will start to subside when they obtain access to the outdoors.

Put it this way; they will not be screaming for you to let them out! 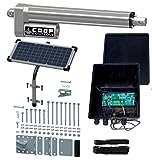 Aside from these options, I have even seen one keeper train her chickens to be quiet!

Just as some dog owners use on their dogs.

The concept here being to spray the problem chicken whenever they are making excessive noise.

The idea is that the chicken will soon associate making noise leads to an uncomfortable spray.

Apparently, you need some consistency here, and some chickens are harder to ‘train’ than others.

And then there is the moral dilemma too.

Either way, it is an option, along with the noise-reducing options discussed above, to consider.

It’s just what they do.

And they do so for a variety of reasons.

It’s their main method of communication, after all.

And as sociable birds who live in a complex social hierarchy – it’s no real surprise that they resort to it time and time again.

Can it be a problem?

Can it get irritating?

Plenty of keepers would agree.

But should it be stopped?

Probably not – and even then, actually getting your chickens to stop would be an incredibly challenging feat.

Instead, acknowledge it for what it is and put in the measures to reduce the noise.

That way, everyone wins.

They are generally quite noisy birds, after all.