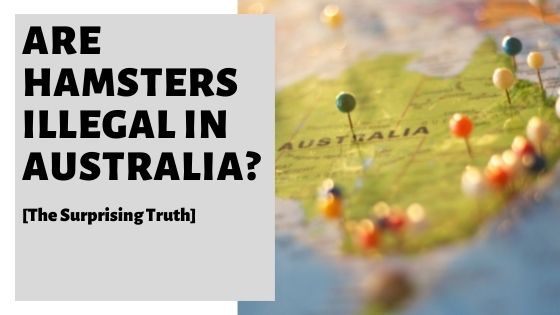 Hamsters are quite the cute rodent. They seem completely harmless. But I recently stumbled upon a question as to whether they were illegal in Australia. I spent some time researching to find out if this was true. Here is what you need to know.

So, are hamsters illegal in Australia? Hamsters are illegal to own or transport into Australia. This includes all states. Hamsters are considered “pests” by the Australian Government and legislation has been put in place to prevent their keeping.

But this is the word used, at least by the Queensland Government in their leaflet regarding prohibited pets.

But we will now see why they have acquired this unfortunate title and why this has ultimately resulted in their total ban across the continent.

Why Is It Illegal To Have A Hamster In Australia?

It is illegal to own a hamster in Australia as the Department of Agriculture, Water, and Environment have classified them, and several other animals, as a legitimate risk and threat to the local ecosystem.

This risk includes to both wildlife, and native plants, too.

And this has been written into law.

The Environmental Protection and Biodiversity Conservation Act of 1999, provides such a framework.

Set out by the parliament of Australia; its primary focus is to maintain and ensure that native and natural biodiversity is maintained, and that threatened species and ecological communities are protected from decline.

You can read more about the act here.

But what could hamsters possibly do to evoke such circumstances?

Exotic – what does this mean exactly?

Well, animals that do not occur naturally in the wild in Australia.

And to take it one step further, hamsters are seen as ‘exotic pests’.

When we consider the definition of ‘pest’ we soon can start to connect the dots: “a nuisance” or a “destructive insect or other animal that attacks crops, food, livestock”.

It all starts to make sense.

And when we refer back to the Queensland Government pamphlet on prohibited pets, it becomes even more clear.

“These animals cost Queensland a great deal of money
and may have contributed to the extinction of several
native animals. Introduced animals can spread infectious
diseases, including exotic diseases (such as rabies) and
other diseases that are dangerous to humans (such as
herpes B).”[1]

So, it appears that hamsters are banned as a means of protection.

A means of ensuring the measures set out in the Environmental Protection and Biodiversity Conservation Act of 1999 are realized.

And the problem is not with the actual keeping of a hamster.

If they were to escape, which is “inevitable” according to the same very pamphlet.

This is when the issues would ensue.

Multiplying into feral populations and causing other animals and plants to perish in consequence.

And it is here that the basis of the law comes to light.

‘The basic philosophy behind the law is: prevention is much
cheaper than cure. Legislation protects Australia’s
environment and economy from further damage due to
new species of introduced animals.’

There is one exception here however.

But even then, they have to meet certain criteria and stipulations; such as being castrated before entering the country!

Other Pets That Are Illegal In Australia

There are a number of prohibited pets in Australia other than hamsters. Ferrets, gerbils, hedgehogs, and certain breeds of dogs and cats are ones to note.

Perhaps the most decisive factor of whether a pet is illegal, is whether it is native to the continent.

Most of the time, animals that are not native are deemed ‘exotic’ and are more often than not, illegal to own as pets.

But taking it a step further, there are certain caveats to even pets that are legal.

These particular breeds have been classified as ‘potentially aggressive’ and have been banned to protect the public and other animals.

And then there are specific cat breeds, such as the Savannah and Bengal.

For a slightly different reason, these are not permitted by law as they hybrid breeds.

This time, these cats are not legally allowed as pose a risk in a slightly different way; altering the gene pool if they were to procreate or mate with native Australian cats.

What Pets Can You Legally Own In Australia?

The most commonly kept pets in Australia, that are entirely legal to own, include:

Of course, before getting any pet in Australia, its wise to do your research and your due diligence.

And not just on the country level, but local state level too.

This household pets resource on the Australian Government website is perhaps the first place to visit and enquire.

Unfortunately, hamsters are not a pet you can consider keeping if you live in Australia.

Nor are they the type of pet you can keep if you are looking to move to Australia.

Either way, you’ll be breaking the law if you proceed and did decide to do so.

And, you risk prosecution and a hefty fine.

That’s what can happen if you get caught.

Not to mention the potential impact you could have on the Australian ecosystem.

Besides, there is a reason for this law.

Thankfully, there is a range of other pets to consider.

Mice and rats; are perhaps your closest alternative.

Or what about a guinea pig.

While a little bit bigger, they are social and fun to take care of, after all.