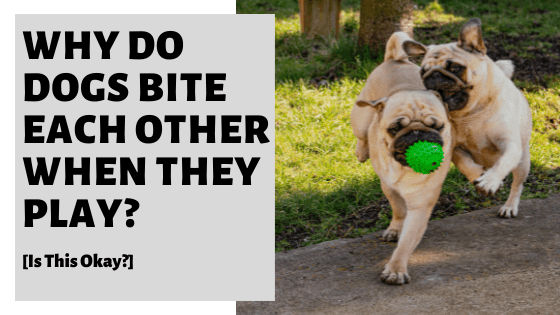 Dogs are certainly interesting to watch and observe. Especially when they are with each other. You may even have noticed that they go as far as biting one another when they engage in play. But why would they want to do such a thing? Is it normal in all dogs or something that may require your intervention to prevent? Well, this article will explain all you need to think about and consider.

So, why do dogs bite each other when they play? Dogs typically bite each other when they play because they are practicing their fighting skills with their friends. Learning how to fight is a natural process for dogs, as they would need to defend themselves in the wild against predators. However, there’s a difference between soft biting while playing and aggressive biting.

Playtime can escalate with some dogs, so you are going to need to be vigilant.

And at the same time, some dogs can be large and powerful, others timid and frailer.

So, injuries can happen, even if it is the result of play and a dog is not setting out to cause harm.

But how common is this behavior, should you allow it, and can you even stop it?

Let’s delve into it!

Is It Normal For Dogs To Bite While Playing?

It is normal for some biting between dogs while they play, so long as they are soft bites and either dog is not being injured or are in clear and visible distress.

It’s normal for dogs to bite while playing, although there’s a difference between a soft bite meant for practice fighting and a hard bite meant to cause harm.

Soft bites are called ‘mouthing’ or ‘jaw sparring’ and are very common when dogs play.

Dogs need to learn to defend themselves right from when they are puppies.

In the wild, dogs would need to defend themselves against predators as well as other dogs in their pack who might want to assert their authority.

It is completely natural and healthy for dogs to play fight so that they can learn what for them are essential survival skills.

While dogs play, you’ll see that they have their mouths open for a lot of the time while they’re chasing and jumping on each other.

Sometimes it may look like they’re biting each other even when they’re not. This behavior is entirely normal and is part of how dogs practice fighting.

Dogs will play bite at each other’s neck and face when they’re both standing still or when one dog is lying on the ground.

All dogs know how to play fight, and they will mouth each other starting when they are small puppies.

When Things Can Escalate

However, things can sometimes escalate between dogs: think of fights you may have had with a sibling or a friend.

Things start out innocently enough, but if someone hits a bit too hard, the other person can get upset and think, ‘Right, that’s too much!’

If one dog unintentionally hurts the other, the affected dog will let them know immediately.

You can see this happen with larger dogs who are still puppies when they play with smaller dogs.

The bigger puppy doesn’t know his own strength, so he may bite too hard, causing the smaller dog to retaliate.

Puppies also take a while to become more coordinated, so a large puppy might step on or fall on a smaller dog without meaning to.

The smaller dog then instinctively lashes out to defend himself, and serious biting can happen before you know it.

Is It OK For Dogs To Bite Each Other?

It’s OK for dogs to bite each other, as long as they’re using soft bites, they are not happening too frequently and no dog is being harmed in the process.

Consider The Size Of Each Dog

Most of the time, dogs who play bite each other while playing won’t hurt each other.

However, it’s worth being aware of size or weight differences.

The bigger dog might exert too much pressure in his bite for the smaller dog to handle.

It’s essential to take your dog’s personality into account so that you can know his limits and be aware of what might send him into aggression or defense mode.

Does your dog enjoy meeting other dogs?

Does he tend to feel relaxed around them or threatened?

Are there specific kinds of dogs (e.g., bigger dogs) that make him feel uneasy?

Is your dog used to encountering new people and animals? Does he enjoy ‘socializing,’ or is he a more passive, shy dog?

How Do You Tell If A Dog Is Being Aggressive Or Playing?

You can tell if a dog is being aggressive or playing by their general demeanor and body language.

There are several ways to tell if your dog is being aggressive or playing.

Signs That Your Dog is Playing

Your dog is probably playing if you can see him:

Signs That Your Dog Is Fighting (Or Getting Ready to Fight)

Your dog has probably had enough and is getting ready to fight if you can see him:

Some dogs are considered to be more prone to aggression than others.

It’s worth knowing which breeds are more ‘bitey’ so that you can be extra vigilant at playtime if this is your dog.

Breeds to watch more closely are:

The above breeds are larger dogs that have been traditionally used for hunting and protection.

They will want to please you, so they can still learn to get along with other dogs and be excellent pets.

Just be aware of their temperament when they are around other dogs.

Can You Stop Dogs From Biting While Playing?

Because play biting between dogs is instinctive behavior, you can teach your dog not to bite as hard, but you can’t stop it entirely.

Here are some ideas for limiting biting between dogs.

Give Your Dog Plenty Of Exercise

A dog who has plenty of exercise is less likely to have pent-up energy, which could express itself in biting too hard.

Your dog will also be less prone to overexcitement, which can lead to too many nips and bites with his doggie friends.

Take your dog on a walk twice a day and give him plenty of time outside.

Socialize Your Dog From An Early Age

Once your dog has had his initial set of puppy vaccines, he can start meeting other dogs.

Start by letting your dog play with another dog who you know isn’t aggressive. That dog will teach your dog way more effectively than you could!

Try to find a dog who is roughly the same size and with a similar temperament to your dog.

Once your dog has learned to play safely with a calmer dog, take him to a dog park where he can get to know other dogs.

By getting your dog used to other dogs from an early age, he will learn confidence as well as how to play safely with others.

The other dogs will teach him what’s OK and what isn’t, and it’s best for him to learn this while he’s little and his bite isn’t as strong.

If there’s a specific dog that you want your dog to be able to play with (such as another family dog), introduce them to each other on neutral territory.

You don’t want one dog to feel he has the ‘home advantage.’ He is also likely to feel more protective of his home and potentially more aggressive.

When the dogs meet each other, have them each on a leash and let them sniff each other.

Take things at the dogs’ pace, taking them for a short walk on leashes before letting them play off the leash.

Dogs can certainly be very possessive over their toys, so leave toys out of the equation when your dog plays with other dogs.

You want your dog to play normally with his doggie friend, not with toys.

Separate Them If Needed

If one or both dogs are getting tense or showing signs of annoyance or discomfort, separate the dogs immediately:

Note: If your dog sadly gets into a fight with another dog, do not try to physically separate them. Dog fights are potentially dangerous for humans, so you’ll have to find other ways of distracting them to get them apart. There are specific techniques you can try, but use these as a last resort.

Dogs bite each other when they play.

While this may seem strange to you and me, understand that this is actually an instinctual behavior that has served a purpose historically.

That being said, this does not mean that you should allow dogs to bite each other. This is especially true if biting is clearly an act of aggression and not one of play.

Ensuring your dog plays fairly with others has a lot to do with their training and level of socialization.

So you can certainly encourage better behaviors.

Besides, ensuring your dog knows how to behave well around others will serve everybody well.

Other than this, expect a little bit of soft biting.

And if it does escalate, you now know what you need to do!

Check out my other dog play related guides: