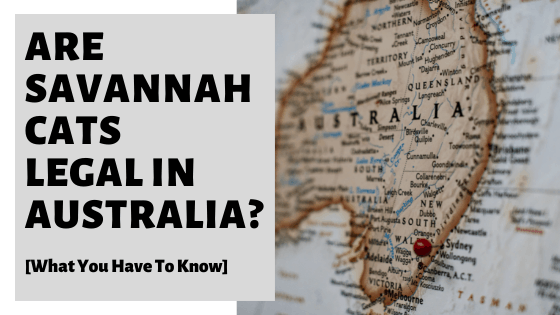 Are you an Australian resident, or soon to migrate over, and wondering whether you can own a Savannah cat there? Well, here is what the law states on ownership of this particular, hybrid breed.

In fact, Savannah cats have never been allowed into Australia.

They originate from the United States, after all.

Interestingly, a Queensland-based company, called ‘Savannah Cats Australia’ were never able to introduce this breed into the country.

They applied, but it was soon rejected.

And it brought about fundamental changes to the Environment Protection and Biodiversity Conservation Act.

It even resulted in a lawsuit, well at least according to PetDirectory.com.au.

Nevertheless, this is not a breed you can, or would even likely want to own due to the laws now firmly in place.

But why were these laws introduced, to begin with?

Why Are Savannah Cats Banned In Australia?

Savannah cats are banned in Australia as they are perceived as a significant risk to native wildlife and the environment. It is believed that if these hybrid cats were released, they would contribute to the extinction and decline of native species.

And they would likely do so in two different ways, at least according to government publications:

Both are two different means to a similar issue.

But is this conclusion even fair?

Well, a 2019 research paper published in the journal Animals, titled ‘Assessing Risks to Wildlife from Free-Roaming Hybrid Cats: The Proposed Introduction of Pet Savannah Cats to Australia as a Case Study, stated the following:

And that study was conducted 11 years on from the original ruling by the Australian government.

But of course, this conclusion is based on the release of Savannah cats into the wild.

Well, according to wildlife shelters in the United States (where these cats originate), this breed is often surrendered or released due to being challenging to care for and some of the behaviors they can exhibit, such as aggression.

They can also jump extreme heights, (up to 2.5 meters from a still position) and often learn how to open doors. Both of which make them challenging to contain.

And this is all due to the fact that Savannahs, along with other hybrids, were initially bred with wild serval cats.

This makes them much larger, often 2-3x the size of your standard domestic cat.

To the extent where the legal requirements are very strict.

Take this notice from the Queensland government, for instance:

As you can see, it’s pretty serious to own, see or be in possession of a Savannah in Australia.

But when the 2019 research would also conclude this, it’s not surprising to see why:

Are Other Hybrid Cat Breeds Illegal In Australia?

Most other hybrid cat breeds are illegal in Australia, with the exception of the Bengal cat, which has been imported into Australia since 1996.

Bengal cats may be imported into Australia if the animal is five generations or more removed from the Asian Leopard cat.

This is otherwise known as an F5 hybrid.

In regards to the F, this simply means filial generation.

Or in other words, how many times removed a cat is from its wild, African Serval ancestry.

Even then, if you are looking for a Bengal cat – there are also some pretty strict regulations in place.

And in regards to importation, in particular, proof of ancestry will be required – you will need official pedigree papers for the cat.

These will need to go back at least 4 generations.

This is all regulated by the Environment Protection and Biodiversity Conservation Act 1999 (EPBC Act) and the Biosecurity Act 2015.

It is administered by the Department of Agriculture, Water, and the Environment and applies to the import of live animals.

In fact, all hybrid animals, not just cats or pets, are regulated.

So much so that the only hybrid currently on the Live Import List is the mule/hinny (horse x donkey).

And that, unfortunately, rules out the Savannah breed.

In fact, if you are looking to own any pet in Australia, it’s best to check in with the authorities and consult the laws and regulations first.

Even animals that are considered relatively harmless, like hamsters and hedgehogs, are illegal.

So do be careful and mindful in your search.

Go through the proper channels.

But if you are still keen on a unique breed of cat, then you can always consider the Bengal.

It will legally allow you to have a stunning hybrid – not too dissimilar from the Savannah.

The Bengal cat is an exception to the general policy.