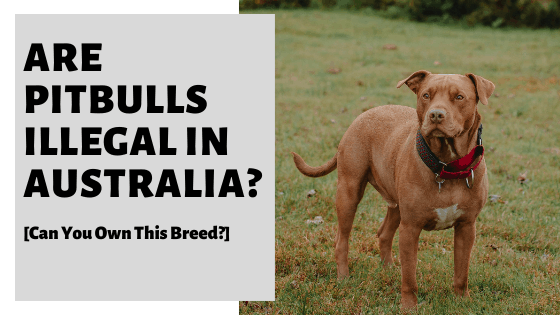 Pitbulls are a breed that divides opinion. They have acquired quite a negative reputation in regard to their temperament and potential safety concerns. Regardless of whether this is fair, right, or wrong, it is the law that will dictate whether you can own one. But what does Australian law say on ownership? Can you keep this particular breed legally in the country – either as a native or by migrating and transporting them in? Here is what you need to know.

So, are pitbulls illegal in Australia? Pitbulls are a restricted dog breed in Australia. This means that you can only legally own one if you have been granted authorization from the authorities and you meet certain criteria. Pitbulls were banned from importation in 2011, with legislation put in place to protect the public and limit potential attacks from the breed.

This is one that certainly need unraveling.

But if you are short on time what you need to take away from all of this, is this.

Whether or not you can own a pitbull in Australia depends.

It depends on circumstances.

It depends on where you live (what state, their local rules and regulations).

And it depends on other factors both in and out of your control.

But before we start to look at who can, and who does, own this particular breed in the Land Down Under, let us first look at why they are even restricted in the first place.

That way, it will at least begin to make some sense.

Whether you agree with it or not (by the way, that’s not what we aim to settle here today).

Instead, this is impartial – based purely on the laws!

Why Are Pitbulls Restricted In Australia?

Pitbulls are restricted in Australia based on a perceived belief that this is an inherently dangerous breed. This stems from their traditional usage as fighting dogs, combined with events that have involved bites, attacks, and even deaths.

While this by no way means that every pit bull is a threat, or that they cannot be raised, and trained to be loving in temperament – the risk is still considered to be there.

Besides, there are three different factors that generally go against them:

And training cannot offer any guarentees.

Even the best trained dog could theoretically succumb or be provoked.

And while to many dog lovers this may seem harsh on the breed, it is an opinion shared by many veterinarians and animal behaviorial experts.

And unfortunately, and statistically speaking, pitbulls have more often than not been involved in, or directly responsible for attacks.

There are reports of them even killing young children.

Unfortunately for the pitbull, there is no real justification for ownership – unlike in other breeds where aggression could be a by-product of their work.

All of this has resulted in BSL (Breed Specific Legislation) by the Australian Authorities.

This is essentially legislation to prevent dog bites and to better manage potentially aggressive dogs, which the Pitbull is classified as one.

Who Can Own A Pitbull In Australia?

It is possible to own a pit bull in Australia if the dog has descended from an existing Australian pitbull line, and owners comply with strict conditions set out by the local authorities.

In reality, the ownership and registration of a pitbull is a local (city/ town or council) issue.

This is why, if you are considering owning this particular breed, you should contact your local authorities for guidance.

Laws differ from state to state, particularly concerning the identification and management of any dog listed and classified as an ‘potentially dangerous dog’ or on the BSL list.

Besides, around 25 of the 77 government authorities refuse to allow or register this breed altogether.

Then there are specific rules, where pitbulls and other dangerous dogs must:

So, if you are interested in this particular breed, it is crucial you do your research and due diligence ahead of time.

Its imperative to become familiar with your local rules, laws and obligations.

Can I Bring My Pitbull To Australia?

Under no circumstances is it possible to import a Pitbull into Australia. This is a stipulation under the Commonwealth customs legislation which bans the importation of several breeds of dogs.

Other than the Pitbull terrier, the following breeds are also prohibited from importation:

The truth is, any animal importation of animals into Australia must adhere to strict rules – as the Australian government website specifies.

It is not limited to just dogs.

And it also includes any exotic pets, not native to Australia.

That’s right hamsters and hedgehogs are on the list.

These conditions are designed to ​manage biosecurity risks, along with to keep and ensure public safety and local ecosystem preservation.

Regardless of your stance and opinion on the Pitbull dog breed; the reality remains the same.

These are considered potentially dangerous dogs by the Australian authorities and as such, they are a restricted breed.

This does not necessarily mean that you cannot own one – but you will have to jump through a few hurdles in order to do so.

It will also mean that if they are allowed in your state, you must comply with local rules and regulations.

And these can differ, and it can impact ownership.

So, if you are still serious about owning this particular breed – be sure to get into contact and do your research ahead of time.