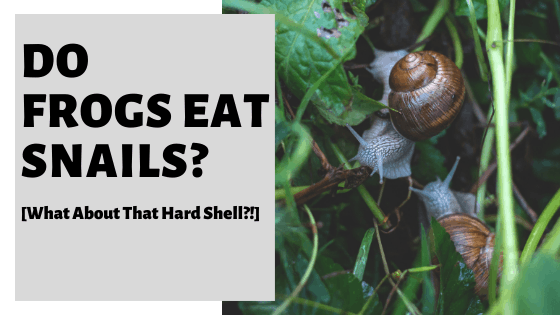 The diet of a frog is relatively varied. As opportunistic feeders, they primarily eat what comes their way. Within reason, of course. But what about snails? Would a frog attempt or routinely consume them?

So, do frogs eat snails? Frogs do eat snails if given the opportunity to do so. They will consume them whole, including the shell, which will typically be found passed (normally broken up) in the droppings.

And snails do not help themselves.

They typically, coming out during the night.

They also are active in warm, damp weather.

It’s no real surprise that frogs will naturally come across them in the wild.

And if they do, chances are the snail is not getting away.

Infamous for their slow-moving, frogs are quick; it’s only ending one way.

In captivity, feeding frog snails is an entirely different subject, of course. The frog species, size of snail, and rest of the diet are all factors to consider.

We’ll be taking a closer look at this and all that is involved with frogs eating snails.

So stick around; you’ll learn something for sure.

Frogs can eat snails and do so routinely in the wild. They’re more than happy to do so in captivity, too, if provided.

As with most foods for frogs, if it’s alive, moving, and smaller than the width of their head – it’s an option.

And this study even suggested that different frog species eat in relation to their skull shape!

“Snail-eating frogs have lower jaws with a relatively long distance from the insertion point of the abductor muscle mass to the jaw articulation”.

Quite a mouthful of jargon, no pun intended.

But what this essentially means is that certain frogs almost seem to have evolved to support the eating snails.

And at the same time, this research even leads to suggest why larger species of frogs will even eat mice.

Nevertheless, most species of frog will safely be able to and look to eat a snail given the opportunity.

Most frog species are carnivorous in nature.

And it comes down to a matter of opportunity for sustenance.

This is why smaller frogs will eat flies, moths, slugs, and worms as well.

A diet of variety, of insects, bugs, and grubs is probably best.

How Do Frogs Eat Snails?

Frogs eat snails by consuming them whole. They use their long tongues and sticky saliva to catch onto the snail before proceeding to swallow.

Frogs cannot chew, so the entire snail goes down in one. That is, of course, if a frog can physically do so.

And the catch of a snail is not too much of a challenge for a frog.

They’re not fast movers. Not by a long stretch.

And talking of stretch.

Frogs are fast to strike; their long and quick tongues can extend and attach to their prey.

It happens all in an instant.

For the snail, the shell is not a concern for a frog.

Their robust digestive systems will see this crushed.

It may come out in small fragments in their droppings.

But to them, it’s just a bit of roughage!

Small frogs do at snails; both ground-living and tree species are keen to consume them.

There will always be frogs that cannot physically consume some snails.

And therefore, they will not be eaten.

And larger species of frogs will be able to consume snails more comfortably.

Large species such as Horned frogs will take them much more easily than a more delicate frog such as a red-eye tree frog.

After all, the shell is hard and requires digestion.

But it can and is safely done by all species over the world.

There is one other stipulation to consider here.

The development of a frog.

Tadpoles consume algae. Algae and only algae. Perhaps other tadpoles too.

But as they develop into froglets and small frogs, their diet transitions.

And once they are large enough, they’ll begin to eat insects, worms, and… you guessed it, snails.

Can Frogs And Snails Live Together?

It is strongly advised not to keep frogs and snails together. If the snails are small enough in relation to the frog, the frog will look to eat them. Equally, larger snails that a frog may not be able to eat will begin to bother them.

In reality, it may be possible.

Besides, they share a preference for similar ecological conditions and have similar needs in this respect.

Both in regards to humidity and temperature, at least.

So it is only natural to consider placing them together.

Besides, they tend to live in similar areas in nature.

But that could be a big mistake.

In fact, there are plenty of reports of people who have attempted to house frogs and snails together without success.

To a frog, a snail is potential prey even if they are not quite capable of consuming them!

Frogs can and routinely do eat snails.

They are a viable food source that is just not going to getaway.

And this intersection is going to happen.

They both share similar habitats; it’s not really a surprise that they often cross paths.

And both species can be found all over the world; in all continents.

In fact, snails can even be found in extremes such as the Arctic and Antarctic oceans and the equatorial regions.

And for a hungry frog that is carnivorous in nature, a snail is not an opportunity that is easily going to be passed up.

Regardless of the shell.