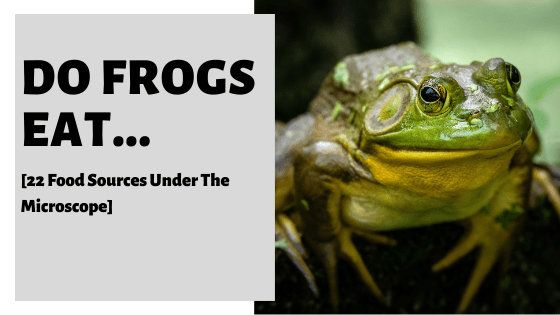 Frogs consume a varied diet, to say the least. Both in the wild and in captivity (when kept as pets.)

As such, it can be difficult to know what these amphibians do and do not eat.

So, I decided to research into the dietary patterns and behaviors of frogs.

You’ll be able to find an answer to each one below!

Adult and full grown frogs will rarely eat algae. Instead, they require more substantial sustenance. However, algae is a primary food source for tadpoles and froglets yet to fully transition over to their adult meat-based diet.

Frogs do eat ants, and this is one of their primary food sources in the wild. In fact, ants are easier to digest than other insects for frogs due to their size.

Black ants are greatly preferred by frogs over red ants.

Fire ants, a sub-species of red ant, can sting and bite; releasing a dangerous toxin that can cause serious harm or death to a frog.

As such, frogs and toads will typically perceive fire ants as a predator and will mostly avoid them entirely.

Frogs will eat bees, if given the opportunity. Tree frogs in particular have been known to actively prey on bees.

Some beekeepers have even reported finding tree frogs in their hives.

Frogs have been known to eat Beetles, although they provide no nutrition to them – because frogs are not able to digest and extract nutrients from them.

Beetles do not succumb to a frog’s digestive juices, due to their hard external exoskeletons. As such, when caught, they travel down a frog’s through (swallowed whole), swim through the stomach, and climb out via the digestive tract… alive.

Aquatic frogs are known to eat bloodworms, and this is a valuable food source for them. African Bullfrogs and Dwarf African Frogs are species known to particularly enjoy them.

Bloodworms can be fed while still frozen to these particular frog species when kept as pets. This is preferable to free-dried bloodworms as they will sink to the bottom of the tank.

Frogs will eat butterflies, so long as they can catch them and the butterfly fits into their mouths.

Frogs will increase their butterfly consumption during seasonal increases in butterfly populations and in response to butterfly migrations.

Frogs will eat caterpillars if the opportunity presents itself to do so. Live caterpillars are particularly likely to be eaten as they wiggle around more and draw attention to themselves.

Frogs will eat dragonflies if they are capable of catching them. Nevertheless, a frog will use their deceptively long tongue to catch and draw in a dragonfly, before they continue to swallow them whole.

Frogs will also consume dragonflies in the larvae stage (the the active immature form of a dragonfly). Frogs will find them and consume them from the bottom of a pond, lake or other body of water.

Larger species of frogs will eat worms, although smaller species would prefer to stick to smaller insects and worms (such as red worms).

In fact, for frog species that are capable of eating them they are a great, complete source of nutrition.

Some species of Northern American earthworms have a distasteful exoskeleton, however, and may not always be consumed.

For larger species, flies do not offer much nutrition, and larger prey will more likely be sought.

Frogs do not eat grass; they are carnivorous by nature and do not have a need for this kind of sustenance, nor the digestive system to be able to break down nor extract any nutrition from it.

That being said, tadpoles (frogs in the pre-developmental stage) will consume a grass-like plant called algae. At least until they develop and transition into a froglet.

Larger species of frogs will eat grasshoppers, although smaller species may not be capable of being able to swallow and digest them.

Frogs do not commonly nor typically eat leeches. This is because they do not feed underwater nor seek out food there.

Leeches are equally too large for tadpoles to consume, and thus, leeches are rarely if at all eaten by frogs.

Frogs will eat mealworms so long as they are alive and moving. It is unlikely that dead, or freeze-dried mealworms will be eaten by a frog and instead will mostly be ignored.

Frogs do eat mosquitoes, but they only typically make up a small amount of the overall diet.

That being said, two particular species of frogs will actively feed on mosquito larvae during their tadpole stage. These are the Giant tree frog and Green tree frog.

Small to medium frogs will eat moths if presented with the opportunity to do so.

A frog will use their long and sticky tongue to latch onto a passing by moth, before proceeding to swallow them whole.

Frogs can eat newts, but they do not always proceed to. Generally, frogs will eat a newt if they are young and still sufficiently small.

Frogs will not commonly eat Praying Mantis. Although, in larger species of frog, and smaller Praying Mantis it has been reported.

It all depends on their relative size.

In fact, slugs are known to be a fundamental food in the diet of most frog species.

As such, frogs are often used or recommended to manage or control local slug populations.

The largest species of frogs have been known to eat snakes.

This includes the bigger Australian green tree frogs, as well as Bullfrogs and Goliath frogs. All of which have been known, or are capable of, eating smaller snakes.

On the other hand, larger snakes are known to consume frogs quite routinely. In fact, snakes will even consume poisonous or venomous frogs/toads and can even steal their venom.

Pristimantis a particular species of large frog found in n Central and South America have been known to consume spiders more liberally in the diet.

Frogs can eat tadpoles, if other food sources are not available. At the same time, tadpoles have been known to eat other tadpoles for the same reason.

As you can see, frogs are not particularly fussy eaters!

They generally eat what they can fit into their mouths and swallow hole!

And of course, it does depend on the species of frog, and what presents itself.

Either way, frogs are carnivorous by nature.

They eat almost every invertebrate they can. This includes a sheer range of bugs and insects.

A lot depends on the size of the frog.

For the larger frogs, well, they are even capable of eating fish, mice, lizards, and even other frogs in some circumstances too!