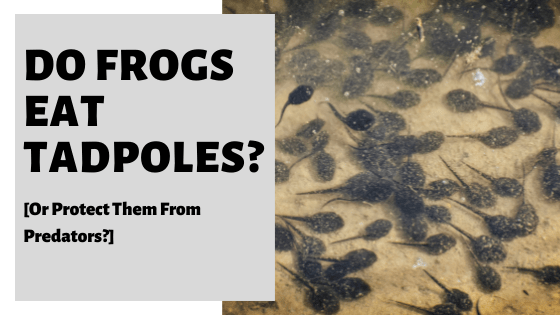 Tadpoles are entirely defenseless and incredibly vulnerable to any predator that makes a go for them. But what about frogs? Do they, or will they, actively try to consume them? Here is what you need to know.

So, do frogs eat tadpoles? Frogs can resort to eating tadpoles if there is not enough food available to them in their environment. This can include their own tadpoles and the tadpoles from other frogs. However, insects, bugs, and grubs, including flies, snails, and worms, are much more preferable and always eaten first and foremost.

There comes a time when it’s all about survival.

And at that point, any source of nourishment will be considered.

And tadpoles will certainly fit the bill for a frog.

Who are carnivores, after all.

But for the most part, if conditions are optimal and food is in abundance, it’s unlikely.

If you are considering it as a possibility – then there are other predators that need to be ruled out too.

Let us now take a closer look at the subject – including if frogs ever protect their tadpoles and those predators that do thrive on these swimming amphibian larvae.

Do Frogs Protect Their Tadpoles?

For most tadpoles, it’s up to them to survive.

In fact, they are left alone long before the tadpole stage.

Most female frogs and mothers will often leave their eggs, or frogspawn, moments after she has laid them.

And whether the eggs, frogspawn, and resulting tadpoles survive is a lot to do with chance!

This is likely why frogs lay so many eggs!

At least from an evolutionary standpoint.

But, there are always exceptions to the rule.

And the marsupial frog species is one such example.

The females of this species actually have a pouch situated on their backs.

And these pouches hold and carry young tadpoles. At least until they develop into froglets.

Another interesting species, the African Bullfrog, is also known to provide a certain amount of protection for their young.

The male frogs of this species are known to stick around by the nesting area – keeping both eggs and tadpoles safe from birds and other small predators. Sometimes they eat them!

Furthermore, African Bullfrogs have been known to suggest paths for tadpoles to move through – giving them pointers of where to go and how to remain safe.

Yet still, it is estimated that only around 10% of frog species protect their young.

For the most part, tadpoles are on their own, with little protection to survive.

Tadpoles have various predators, either in the water, from the land, or coming from the air. Newts, hedgehogs, fish, birds, dragonfly nymphs, and snakes are the most common. Although, larger tadpoles and frogs have been known to eat tadpoles too!

As you can see, tadpoles have quite a lot of predators.

It’s not really a surprise to see why.

They provide quite a bit of sustenance and cannot put up much of a fight.

So much so that over 90% of eggs laid by a frog, or tadpoles that have managed to develop, are expected to be eaten by predators before they become froglets.

What Do Tadpoles Need To Survive?

Tadpoles require food, water, warmth, and protection to survive. Although their specific requirements will depend on the body of water in which they sit and the species of frog that they will develop into.

They need to be able to survive the 14 weeks it typically takes for them to morph into a frog.

And they’re very vulnerable during this time.

To a whole range of predators as outlined already.

Outside of staying away and safe from predators, they have three very basic necessities for life during the tadpole stage:

Tadpoles need food to survive. Besides, they need to fuel their growth and transformation into a frog.

But, as you can imagine, their food must be very specific. They’re tiny, after all.

Food has to be small – small enough to fit into their mouths.

This generally ranges from insect larvae, water striders, and in certain cases, some tiny small fish.

The more food that is available in the body of water that the tadpoles live, the better.

They possess gills and tails, which are used to acquire oxygen from the water and to propel them through it.

Legs and lungs only develop as they begin to morph into frogs.

Up until then, they must remain in water – wherever, or whatever body of, that may be.

This explains why frogs typically mate in the spring and summer months; when water is warmer and their tadpoles can develop more quickly.

While different species of tadpoles/frogs require different temperatures, anything above the norm does typically help with maturity.

If waters are too cold, at least relative to the local conditions, tadpoles can even enter hibernation – or cease development altogether.

It has been known for larger frogs to eat baby frogs – so long as they can fit inside their mouths. Studies have shown that this can occur within the same species, along with one species consuming another species too.

It is believed that as opportunistic feeders – a frog will eat anything that moves – and that they perceive they can safely consume.

Interestingly, research has shown that frogs living in a non-native habitat are more likely to eat other frogs than those living in their native habitat.

‘Can’ is the key word here.

Frogs have been known to, and certainly will do so, in particular contexts.

But it’s more of a survival thing than anything else.

Flies, moths, snails, slugs, and worms – these will always be preferred.

If and when, they are available in the environment, of course.

Do Frogs Eat Their Own Tadpoles?

Frogs have been known to eat their own tadpoles – but only when food is scarce. For the most part, frogs will opt for larger prey – including insects and worms, given the opportunity.