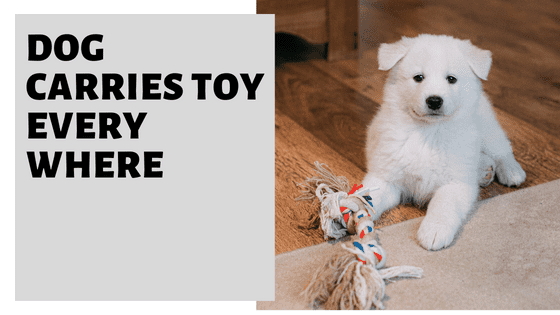 It’s kind of sweet, isn’t it? Your dog is so invested in their toy. Taking it around with them everywhere they go. But why do they do this; is it even normal behavior? And perhaps more importantly, is this something you should stop? Well, that’s exactly what I’ll be covering here today.

So, why does my dog carry his toy everywhere? Dogs typically carry their toys around with them when they want to bring you a gift. However, there are other reasons for dogs carrying their toys around, such as maternal/hunting instincts, during periods of anxiety, teething, or a simple preference for that particular toy (due to its texture/taste/smell).

Well, at least if it is due to them wanting to gift you.

But this isn’t always it.

So let’s delve into the reasons in further detail so you have helped identify what the underlying cause may be in your dog, or in certain contexts, before turning to those appropriate responses.

Reasons Why A Dog May Carry His Toy Around

There are many reasons a dog might carry around his toy, ranging from wanting to bring you a present, to teething, or just because he likes the smell of his toy. Other times your dog may be feeling anxious, bored, maternal, or like a natural hunter. And there are some instances where you may have unknowingly encouraged his behavior by reinforcing it.

Your Dog Wants to Bring You A Present

Most dogs will carry a toy everywhere because they want to bring their owners a present as a way of showing that they appreciate you.

Your Dog Is Teething

If you have a young dog who is getting his adult teeth, he may be carrying a toy around to relieve some of the pain in his gums.

Be sure to give your dog suitable things to chew on for his growing teeth, and keep him away from items you don’t want him chewing on.

Your Dog Likes The Smell Of His Toy

Sometimes your dog will carry the same toy around with him everywhere simply because he likes the way it smells.

This is particularly true if your dog has a stuffed toy or something else that can easily carry your scent, such as a shoe, sock, or another item of clothing.

Your Dog Is A Natural Hunter

Some dogs have stronger hunting instincts than others.

For example, dogs who prefer carrying around squeaky toys often do so because the squeak mimics the sound prey would make if it’s caught in their jaws.

Dogs with high prey drives can have a tendency to want to carry toys around, as many of these dogs were bred to hunt and fetch prey for their people.

Squeaky toys also provide immediate gratification – if your dog enjoys rewards, he may appreciate getting his own reward every time he chews and hears a squeak.

Wild dogs such as wolves will hunt and carry food in their mouths to their dens, so it could be your dog is simply expressing his ‘wild side’ by carrying his possessions in his mouth.

Your Dog Is Feeling Anxious

You can tell if your dog is carrying around a toy out of anxiety if he tends to do it when he’s faced with a stressful situation.

Does your dog pick up a toy and carry it around when he knows you’re about to leave the house?

If your dog has only recently begun this behavior, has anything in his environment changed recently?

Sometimes the addition of a new family member or another change to a dog’s routine is enough to cause anxiety.

You Have Reinforced His Behavior

You may have unwittingly reinforced his behavior and he has learned that good things happen when he carries a toy around.

Some owners find it very cute to see their dog carrying around the same toy, and they might give their dog a treat.

The dog will then equate treats with the behavior, and is more likely to keep doing it for more rewards.

Your Dog Is Expressing Maternal Instincts

Some dogs – especially intact females – may start carrying a toy around as if it’s their baby.

Is your dog in her heat cycle when she does this? If she’s been spayed, was it within the last three months? She could be experiencing a false pregnancy.

Some non-spayed female dogs can ready themselves emotionally for puppies even when they’re not pregnant.

They will change their eating habits and seem only interested in their ‘puppy’, often mothering it.

Should You Stop Your Dog Carrying Their Toy Around?

As long as your dog is healthy, happy, and not displaying signs of being overly possessive of his toy, there’s no need for you to stop him carrying his toy around. If, however, you notice your dog is becoming aggressive if you try to take the toy away, it might be time to consider other options for him to find comfort for himself. You also don’t want your dog to remain anxious, bored, or with teething pain, if you can provide relief.

If your dog suddenly starts carrying around the same toy as a new behavior, it could be he’s seeking relief from:

In the above cases, you’ll want to address the causes of this behavior before trying to change the behavior itself.

For example, if your dog is teething, there are puppy-friendly chews and toys you can provide for him that can bring him relief.

If your dog becomes possessive over his toy to the point where he gets aggressive if anyone tries to take it away, you’ll want to nip this behavior in the bud (see below).

Here are a few things to check to help you discover the cause of his toy-carrying behavior:

What To Do About Your Dog Carrying Their Toy Around

What to do about your dog carrying his toy around depends on the cause of the behavior.

If Your Dog Is Bored

If your dog has been carrying around a toy out of boredom, try these steps to offer him more stimulation in his day:

If Your Dog Is Teething

If your dog is teething, the easy solution is to provide him with specific, dog-friendly chews or toys that are designed to soothe his gums.

Once his adult teeth come in, this behavior should lessen of its own accord.

If Your Dog Has Anxiety

If you think anxiety is at the root of your dog’s behavior, first try to remove any potential causes of stress.

If your dog has a severe form of anxiety such as separation anxiety, there are various steps you can take such as giving your dog lots of extra exercise before you leave the house, having friends come and visit your dog.

If You Have Been Reinforcing Your Dog’s Behavior

Take steps to help your dog unlearn this behavior by not rewarding it anymore. Reward the behavior that you want to see.

You can teach your dog the ‘drop it’ command and reward him when he complies.

Be sure to avoid raising your voice or chasing after your dog to try and get him to drop his toy. Some dogs see you chasing them as a fun game, so they’ll only keep running!

You can also try redirecting your dog’s focus. If you see him about to pick up his toy to carry it around, try calling his attention to something else that’s potentially more rewarding (such as a game with you).

If You Think Your Dog Is Experiencing a False Pregnancy

If your dog seems to be mothering one particular toy and you suspect she might have a false pregnancy, bring her to the vet.

False pregnancies usually resolve themselves in 2 to 3 weeks without treatment, but there are some other medical issues (many of them serious) that can cause similar symptoms.

In addition to carrying her toy around, nesting, and other false pregnancy behaviors, watch your dog for:

The above signs could indicate a uterine infection called pyometra which requires emergency treatment as it can be life-threatening.

A dog can carry their toy around with them for a multitude of reasons.

But as long as it’s not the result of something more serious going on, thankfully, this is not something you usually need to worry about too much.

Related guides you may want to read: