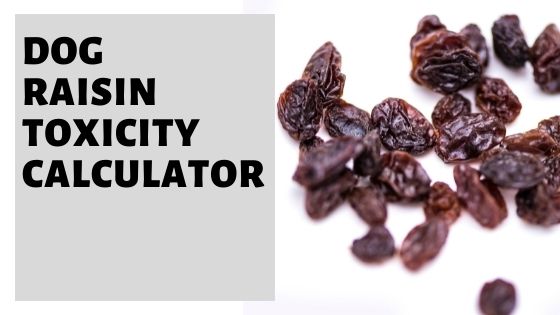 Has your dog consumed raisins? Are you wondering whether they have consumed a toxic amount? Well, use our calculator below to get a better understanding of how serious the situation is:

Disclaimer: This calculator is based on the general recommendations given by veterinary manuals. However, raisin toxicity can vary dog by dog, context to context. So do not take this as medical advice. Instead, seek the advice of a veterinarian should your dog consume any quantity of raisins.

Why Are Raisins Toxic To Dogs?

Presently, on the latest research, it is not known why raisins are toxic to dogs – no specific compound has ever been established. Some experts have suggested it could be the result of a mycotoxin (a substance created by a fungus) or a compound known as salicylate which is naturally presented in grapes. Tartaric acid has also been suggested.

Since it is not known why raisins could be toxic, any consumption should be considered a cause for concern.

What Types Of Raisins Are Toxic To Dogs?

All types of raisins are considered toxic to dogs. This includes raisins from both homegrown and commercial grapes, red or green raisins, and organic/non-organic options.

What Is The Toxic Dose Of Raisins For Dogs?

There is no definitive toxic dose of raisins for dogs. This is because each dog has its own sensitivity; and different dogs of different breeds, ages, sizes and genetic heritage will respond differently.

That being said, it is fair to assume that toxicity is possible with any significant quantity of raisins; which can be eaten in large amounts very quickly due to their small size (0.5g/ 0.017 ounces. on average).

Currently, there is no way to predict how a dog will respond.

Nevertheless, a general and rough guide for potential toxic dose is as follows:

Symptoms of Raisin Toxicity In Dogs

The most common symptom experienced by dogs having consumed raisins is vomiting.

Often, vomiting is then followed by:

In more serious cases, the following may then be observed within the next 24 hours:

In extreme cases, a dog can go through acute kidney failure. In such instances, the kidneys may stop functioning altogether and may cease urinating altogether.

High blood pressure is another sign of this condition onsetting.

If acute kidney failure is not addressed promptly or appropriately, a dog can lapse into a coma.

How Long Does It Take For Raisins To Affect A Dog?

It can take anywhere from 8-48 hours to see symptoms of raisin toxicity in dogs – depending on the dog’s age, weight, size, and the number of raisins ingested.

Generally, the more severe signs, such as acute kidney damage are observed towards the latter end of that scale, around the 24-48 hour mark.

What To Do If Your Dog Has Consumed Raisins

It is strongly advised that you contact a vet immediately following the consumption of raisins, in any quantity.

Contacting a vet promptly is recommended for the following three reasons: