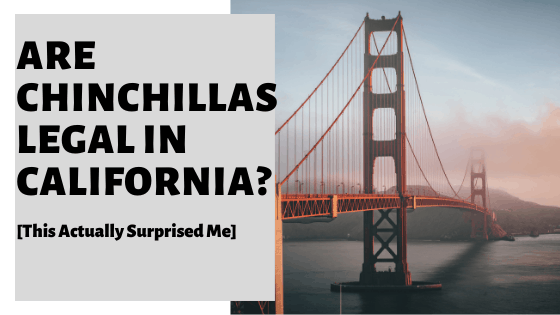 California is renowned for having some of the strictest rules when it comes to the kinds of pets you can legally own. But what about chinchillas? Can the general resident of CA get and care for one of these cute, fluffy-tailed rodents? I spent some time researching the laws and have some excellent news to share with you…

So, are chinchillas legal in California? It is legal to purchase and own a Chinchilla as a pet in California. The only caveat being that they are a domesticated species and have not been caught from the wild. Chinchillas can be bought from specialized breeders along with larger pet stores, such as Petco.

A chinchilla is still a viable option for you.

That is if you want one.

And it makes quite the change.

Besides, it seems that California could not be any more strict when it comes to pets that can be legally owned.

Ferrets, hedgehogs, sugar gliders, axolotls – these are just some of the pets you cannot legally own in California.

And it doesn’t stop there.

Pretty much any animal deemed ‘exotic’ seems to be included.

Thankfully, chinchillas escaped. The list, and for now, that is.

Let us now take a closer look at what is involved in keeping this rodent in the Golden state.

That way, you know exactly what to expect if you did pursue ownership further.

And you may want to – there are not many animals else to consider!

Do You Need A License To Own A Chinchilla In California?

You do not need a license to own a chinchilla as a pet in California. Instead, all you need to do is purchase this rodent from a reputable and reliable breeder or pet store.

But permits are actually required for those banned pets referenced above.

And the chances of getting one are incredibly slim.

In fact, almost impossible unless they are being acquired by a medical research or university institution (among a few others).

But for chinchillas, there is presently no law or policy in which requires you to fill out a license for possession of this rodent.

And better yet, pretty much all US states do not require a permit for a chinchilla either.

Which is not always the case.

Sometimes, pets are legal in one state, illegal in the next.

Nevertheless, this makes a chinchilla a great pet, regardless of your circumstances and any desire to relocate, i.e., moving to California or away from California.

Where Can I Buy A Chinchilla In California?

Chinchillas can be purchased from either large pet retailers, such as Petco, or from individual breeders that specialize exclusively in chinchillas.

Now it must be said that not all large pet retail stores will sell chinchillas.

And it does vary from store to store.

So, it’s worthwhile to contact your local pet retailers in advance to see if they do.

Or at least, they have any available for sale at that present time.

It can save a wasted journey, and in the case of young children, potential upset too.

But when it comes to individual breeders, there is often quite a lot of choice.

In fact, if you head over to Google and search ‘buy chinchilla California,’ you will be presented with a range of different breeders.

And these are just those with an online presence.

Chances are, you will find other breeders without a website too.

That being said, it is strongly advised to be very mindful and particular of where you buy your chinchilla from.

You should only purchase from reputable breeders.

Those with a good reputation, ones you can do your due diligence on.

It’s essential that you only purchase a chinchilla in good health, one that has been bred carefully and appropriately.

And if you spot an exceptionally good deal, it’s usually a red flag.

But what should you be expecting to pay – well, the next section should help you with that!

How Much Do Chinchillas Cost To Buy In California?

Chinchillas generally cost between $125-$300 to buy. Although, where you buy them from and the sex of the chinchilla are two of the main factors that will influence the price.

At retail stores, you can typically pick up a Chinchilla for between $150-$180. That is actually the price at PetCo.

Demand, supply, the reputation of the breeder; these all generally impact the price and what you can expect to pay.

And of course, so far, we have only mentioned the cost of the chinchilla itself.

There are many other costs to consider with ownership.

Here are just some of the other costs to consider and the average price:

Of course, there may be other expenses along the way, and the total cost will completely depend on where you go.

It works out to around $250 on average per year for these rodents.

Just consider that they can live up to 20 years!

But, with a good insurance plan and so long as you do not get unlucky with a huge veterinary bill, most of the course will come upfront buying the chinchilla and all of the necessary items.

Chinchillas are known for being clean, odorless, fun, and friendly.

It’s no real surprise that they make such a great pet.

And if you are a California resident, you’ll be pleased to learn that they are an option for you.

Even if many other animals are not.

One final thing to mention here is the sunny climate of California and what this can mean for ownership.

You need to be particularly mindful and careful in the warm and sunny months.

Chinchillas do not sweat, can become overheated incredibly quickly and easily, and can die from heatstroke.

The obvious sign is bright red ears, as this is the only way they can remove heat from their bodies.

A chinchilla should never be exposed to temperatures higher than 80 degrees Fahrenheit.

And in August, temperatures can rise to 83 degrees Fahrenheit in California, so you have to be careful and take appropriate action during such times.

Equally, they do not do well in temperatures below 59 degrees Fahrenheit.

And in the winter and December months, temperatures can drop to around 54 degrees in California.

So, you must remain vigilant and learn all about their unique needs and requirements.

Plan ahead and accordingly.

Nevertheless, at least you can decide if you do want one with a bit more research.

At least that decision is up to you!