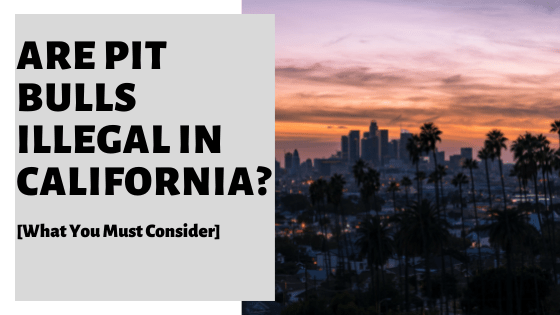 The pit bull is a breed with quite a reputation. And rightly or wrongly, it’s not always positive. But how does the state of California view them? Have laws, regulations, and policies been put in place to prevent ownership? I spent some time researching to find out!

So, are pit bulls illegal in California? Pit bulls are legal in California, although you must adhere to some strict laws in order to own or breed them there. Licencing, vaccination, neutering, and keeping them under control at all times are all stipulations. Failure to comply, or acts of aggression or biting can result in criminal prosecution/confiscation of the dog.

This is otherwise known as ‘BSL’ or Breed Specific Legislation.

And it does not just apply to pit Bulls, but a series of other breeds deemed ‘potentially dangerous’.

Now, whether you agree with this or not, the reality remains the same. Owning one of these dogs requires careful consideration.

Besides, these regulations can come at a serious cost to the owner, or even the dog themselves, if they are perceived to be broken.

Let us now take a closer look at all that is involved with owning this breed in the Golden state.

Are Pitbulls Allowed In California?

Pitbulls are allowed in California, so long as the owner or breeder adheres to strict regulations as set out in state law. This is not discriminatory of this particular breed, but of any dog perceived as ‘potentially dangerous or ‘vicious’.

So, if you want a pit bull and live in California, you are going to need to:

Some counties within the state of California will even include spaying or neutering in their rules and regulations too.

And taking it one step further, it is a criminal offense in failure to comply with any of the above.

Or, more generally and failure to control this particular breed.

Any attack, signs of aggressive behavior, fighting or biting are all such offences.

They can result in confiscation of the dog, and even euthanization is the dog is deemed a significant threat to the general population.

For you, the owner, it could also result in one of the following criminal charges depending on the context:

The two laws to absolutely take a look into if you are considering owning this breed are:

Tips When Owning A Pitbull In California

The above is certainly alarming, especially if you are particularly fond of this breed and are looking to take one in.

At the same time, you may even already own a pit bull and are looking to relocate to California.

Either way, there are some general recommendations and tips to follow to ensure that you comply with such regulations and minimize the risk of prosecution:

While these are all good principles for any dog owner, they will also do you both well.

Not only should they result in a better behaved dog, but also will demonstrate to any authorities that you are a responsible owner should any situation arise.

At the same time, if you were ever to be challenged by an animal control or law enforcement officer, be sure to seek advice from an attorney who practices animal law if any charges were imposed.

What States Are Pitbulls Illegal In?

It is entirely illegal to own a pit bull in Iowa. This is the only state that has a statewide law against the particular breed. Kansas, Ohio, Missouri, Wisconsin, Mississippi, Arkansas, Michigan, Louisiana, and Kentucky are other states whereby a majority of cities have bans or other breed-specific legislation in place.

Its rare to see an entire state ban a breed. Except in the case of Iowa.

What is more common is to see individual cities of a state ban a breed, and then other cities install Breed Specific Legislation (BSL) on their ownership.

In fact, over 937 cities in the US have BSL legislation in place!

And just as we have seen in the case of California; BSL typically means that owners have to ensure their dog never engages in aggressive or dangerous displays.

Or otherwise, prosecution, confiscation and ethunization can ensue.

So, if you do intent on owning a Pit Bull, you must become familiar not only with your state law, but of local city laws too.

And this not just confined to Pit Bulls either.

Rottweilers, Alaskan Malumutes, Huskies, Wold Dogs, Dobermans, German Shepherds; all of which are often subjected to the same scrutiny and perceived as “potentially dangerous” or “vicious” dogs.

Pit bulls are legal in California.

In fact, owning this dog in the Golden state comes with a lot of responsibility and liability.

So much so that these dogs may not even be for everyone.

And that’s a shame.

There is rightly some controversy as to whether these dogs are indeed more dangerous than other breeds.

Sure, there have been incidences, but could this not be said for other breeds too?

Besides, correlation does not equal causation.

The fact that this breed is often used in underground fighting groups is a stain on the breed. Its unfortunate.

There are certainly myths too; such as is the case with jaw-lock.

Nevertheless, what you need to know – regardless of your views, is that if you want to own this dog in California – you can.

But it’s not a decision you should take lightly.