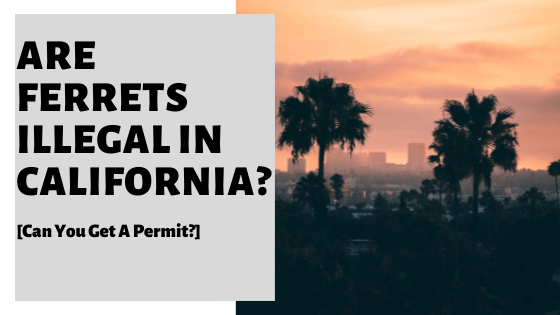 Living in California certainly has its pros. But one downside is the strict laws on keeping pets. But what about ferrets? Can you keep them if they live there? I spent some time researching the local laws to find out. This is what you need to know.

So, are ferrets illegal in California? Ferrets are illegal to own as pets in California. In specific cases, the California Fish and Game Department may issue a permit for the possession, transportation, or importation of ferrets in the state, but these are in very limited and strict circumstances – such as for University veterinary/animal science research programs.

The truth is, you’re pretty limited to what you can keep as a pet in California.

And of course, while I would never advocate breaking the law – it has been known for people to keep them anyway.

Nor is it something I would ever endorse.

Laws are laws for a reason.

But, it’s fair that it has led to a lot of confusion as to whether you can own certain pets – besides, if some people are keeping them, it must be legal, right?

Or, they must just have a permit.

But what you should know is that only in very special circumstances would you be able to obtain one.

In fact, it would need to be at the request of a legitimate organization such as a medical research facility or perhaps even a Zoo.

So you do need to be careful.

Particularly if you see ferrets for sale – perhaps online, maybe in an exotic pet shop.

Or, of course, if you currently own a ferret and intend on moving to California.

That would not work either.

Nevertheless, let us now take a closer look at the laws.

We will cover exactly why ferrets are illegal in California and if there is anything you can do about it.

Why Are Ferrets Illegal In California?

Ferrets are illegal in California to help protect and preserve local ecosystems – including both agriculture and wildlife. It is believed that ferrets would disrupt and pose a threat to the local environment if they were to escape or to be released.

It’s a belief that dates back decades that ferrets could form feral colonies and even decimate other plants and species of animals.

So, preservation seems to be the key theme here.

Although it must be said that California is only one of two states where it is illegal to own as a ferret as a pet.

And it has caused controversy, as we will soon see in the section below.

When Did Ferrets Become Illegal In CA?

Ferrets became officially illegal to own in California in 1986, although the origins of the law date back to 1933.

1933 saw the first law implemented that would impact the ownership of these mustelids.

It was then that the wild bird and animal importation law (where it is unlawful to import and transport animals – unless permitted by the Fish and Game Commission) came into effect.

There have been many amendments since.

Up until the 80s, when ferrets were specifically written into the law and a publication of notice was announced.

In 1986, it became illegal to own ferrets as pets – even if they were neutered.

The only exception being, for existing owners.

And its a policy that holds true to this day.

Despite many attempts for the law to be reviewed and overturned.

In fact, a recent 2017 petition by LegalizeFerrets.org received 10,000 signatures.

It proposed that ferrets should be allowed as pets if they had been spayed or neutered prior to sale, receive annual rabies vaccinations and a $100 one-time license fee was paid.

But unfortunately, this petition never got in front of voters and subsequently, the campaign collapsed.

It hasn’t reduced the sentiment, mind.

What Happens If You Get Caught With A Ferret In California?

If you get caught with a ferret, and you do not have a legitimate permit authorizing their legal ownership, you can get charged with a misdemeanor. This can result in six months in jail, a fine of around $1,000, and the permanent confiscation of your pet(s).

And it gets worse.

Chances are, if your ferret were seized they would likely be euthanized too.

So, owning a ferret in California is undoubtedly high-risk.

And its certainly not a way most of us would want to live.

Constantly looking over your shoulder; the anxiety of being caught.

Plus, ownership would not be easy either.

For instance, you would not be able to contact animal control in the case of an emergency, such as if your ferret were to escape.

With numerous reports of government crackdowns – use of state agricultural inspection stations or following up on tips made by the public, keeping a ferret in California really is not feasible.

Can You Get A Permit For A Ferret In California?

You can get a permit from the Department of Fish and Wildlife to own a Ferret in California, but these are only granted to certain individuals in specific circumstances. The general public would not be able to obtain such a permit.

So who would be able to acquire this legal document?

For instance, Oakland Zoo has two ferrets. And the reasons for keeping them are pretty interesting.

The two excerpts from their website give us a good overview of why they have been granted such permits.

Describing the status of ferrets:

“Domestic Ferrets are listed as a species of Least Concern due to its close relationship with people as a pet. In fact, more concern is raised if a ferret becomes feral in an environment. Due to their ability to hybridize with other mustelid species, and their suburb hunting instinct it would be considered a burden on native species if domestic ferrets became wild.”

Describing the role of the zoo:

“As a way to educate the public on the dangers of invasive species, Oakland Zoo has 2 ferrets which are used in community programming. People are always sad to learn that it is illegal to own ferrets as pets in California, but are relieved to know that native species are being conserved from these cute, ferocious pets.”

All legitimate and fair reasons.

I’m sure the term “ferocious” (savagely fierce, cruel, or violent) is enough to raise some eyebrows though!

Ferrets are just one of a number of animals that are illegal to own as a pet in California; from axolotls and sugar gliders all the way through to hedgehogs.

The list is pretty extensive; and you can check it out here.

In reality, the laws are strict.

Plus, there are some serious repercussions anyone would face if they did happen to get caught owning an ‘exotic pet’ without a permit.

Of course a permit would make you exempt.

Problem is, these permits are not freely available.

And, even despite significant attempts to change the law – these ultimately ended in failure.

So for now, ferret ownership in California is not feasible.

And unfortunately, the laws are not looking like they will change anytime soon.

So perhaps you need to consider something else, like a chinchilla perhaps?

Disclaimer: This article is by no means offering legal advice nor recommendations for ferret ownership in the state of California, or otherwise. It is essential and vital that you do your own research, due diligence and contact your local authorities for further information regarding pet ownership in your state, and of particular exotic species.