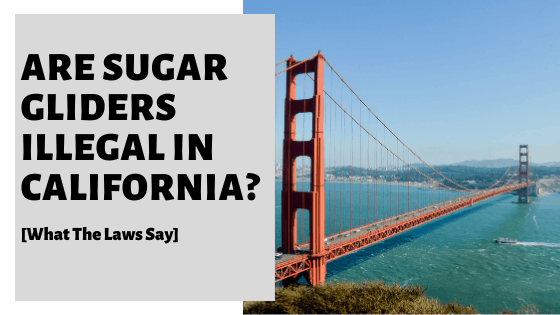 Sugar gliders, the small, nimble nocturnal gliding possums, are certainly an exotic pet to keep. But is it even possible to keep one in California? Are there are any laws that prohibit and prevent otherwise? Here is what you need to know.

So, are sugar gliders illegal in California? Sugar gliders are illegal to sell, keep, and own in California and some other U.S. states, including Alaska and Hawaii. These laws have been put in place to protect public health and safety, agriculture, wildlife, and natural resources.

In fact, it doesn’t just stop at sugar gliders.

There is a range of animals that cannot be legally owned in California.

And you’ll be quite surprised with some that are on the list.

Hamsters are illegal too.

Back to sugar gliders.

Let us now take a closer look at those reasons why it is not possible to keep this marsupial as a pet in this sunny, western state.

Can You Get A Permit To Own A Sugar Glider In California?

At present, there are no such permits that would allow the ownership of a Sugar Glider in California. The only rare exception would be a permit for a Zoo, which would include a number of stipulations and be available on a very limited basis.

Even Zoos, require years of training, hands-on experience and be associated with a legitimate educational or research facility.

As you can see, it takes a lot, even for a Zoo to own them.

One such Zoo that has met such requirements is the San Diego Zoo. You can even organize a meet and greet with these marsupials up close.

But for the average California citizen, sugar glider ownership is out of the question. It’s not a viable pet due to the laws that are in place.

One thing to note here is that regulations do vary by state.

For instance, in Pennsylvania and Massachusetts, while sugar gliders are also equally illegal to own and keep, it may be possible to obtain a license.

At the end of the day, before taking on or looking at any potential pet its important to check with your states Fish, Game and Wildlife Department.

This could not be more important than in California!

Why Are Sugar Gliders Illegal To Own In California?

Sugar Gliders are illegal to own in California to protect local ecosystems (native wildlife and agriculture), the public (and their health and safety), and the Sugar gliders themselves.

Protect is the key word here.

And we can only assume when reviewing these laws that the potential issues stem from a sugar glider being released into the wild or escaping.

Nevertheless, regardless of how careful an owner would vow to be, they’ll likely never be given the opportunity to do so.

And it extends much further than sugar gliders too.

California’s restrictions extend to many different kinds of wild animals and pets (which are legal in other states).

As a result, California has quite the reputation for having strict laws around pet ownership.

Just remember; the intentions are there to protect all parties involved.

What Would Happen If You Get Caught Owning A Sugar Glider In California?

Getting caught owning a sugar glider in California can result in a civil fine, criminal prosecution, and removal/confiscation of the sugar glider(s) being owned.

From a monetary perspective, you would likely be subject to a fine of between $500-$10,000 (depending on the circumstances), plus charged for any additional costs incurred for the animal’s removal, storage, and care.

You could also be liable to criminal prosecution for a misdemeanor, which could even include up to 6 months in county jail (along with a further $1,000 fine)

As you can see, these penalties are pretty severe.

And then there is the fate of the sugar glider itself.

As these animals are not native, nor could they be safely released into the wild, the sugar gliders confiscated or removed are likely to be euthanized.

So, it is strongly advised not to get a sugar glider in California.

The risks far outweigh any benefits from both a financial and moral perspective.

What States Are Sugar Gliders Legal?

Sugar gliders are legal to keep as pets in most U.S. states. The only real exceptions are California, Alaska, Hawaii, and Pennsylvania. Some cities, such as St. Paul, Minnesota, and New York City, also ban ownership.

Nevertheless, despite being illegal in some localities, they still remain popular pets across the United States (where they are bred in quite significant numbers).

Most states and cities allow sugar gliders as pets.

And some states have even changed their law to allow ownership – such as Massachusetts in 2014.

Then there are other states that will require special licensing or particular permits.

And when it comes to breeding, sugar gliders are closely regulated and licensed by the U.S. Department of Agriculture (USDA) Animal and Plant Health Inspection Service (APHIS) through the Animal Welfare Act.

Sugar gliders may seem like an enticing pet to own, but if you are a Californian resident, I’m sorry to say it’s not going to happen.

And even then, we would strongly discourage, refute and not recommend illegal ownership.

Besides, do you really want to risk the possibility of your pet being euthanized?

That’s the most important consideration here.

Although, a hefty fine or imprisonment doesn’t sound too good either!

Ultimately, if you are looking for a new pet – most of the ‘exotic’ pets will naturally be out of the question in this sunny state.

But what constitutes exotic?

While there are many definitions of the term, it generally applies to any animal relatively rare or unusual to keep or is generally thought of as a wild species rather than a pet.

That being said, wherever you may reside, do your research, contact your local authorities and check your laws.

Here’s a good starting place for the pets that are prohibited in California.

And lastly, do monitor the laws and any subsequent changes as was the case for Massachusetts.

While the law is very unlikely ever to change in California, it’s something to certainly consider regarding pet ownership – even if you were to move state at a later date.