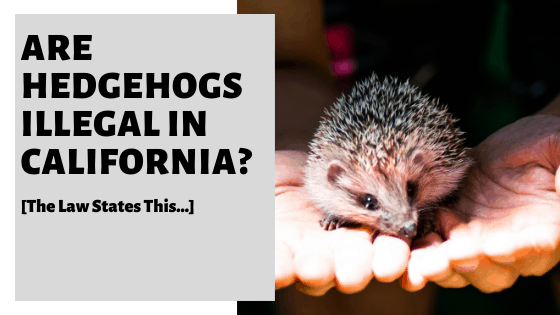 Hedgehogs can make great, interesting, and unique pets. But can you legally own one in California? Or are there laws and regulations in place to be aware of? Here is what you need to know.

So, are hedgehogs illegal in California? It is illegal to keep any of the 17 known hedgehogs species as a pet in California, along with other states, including Georgia and Pennsylvania. Laws have been put in place to protect local habitats and ecosystems (including both plants and other wildlife).

While they may be small, cute, and seem relatively harmless, the state has deemed otherwise.

But this is not the case for just hedgehogs.

California is known for its stringent pet laws.

As such, almost any pet considered exotic is banned.

While some may not come as much of a surprise, you’ll be surprised at just some of the animals that are included in the restrictions – gerbils and hamsters; who knew.

Nevertheless, let us now take a closer look at the case for hedgehogs specifically.

Can I Get A Hedgehog In California?

While it may be possible to get a hedgehog as a pet in California, it’s entirely against the law to do so. It is therefore strongly advised that you do not. The only exception would be if you were to hold a permit.

That being said, permits are seldom held out.

Typically, the only way a permit would likely be obtained is for educational purposes or from a registered, authorized animal facility (such as a Zoo).

And even then, there would be a long list of requirements and stipulations that would need to be adhered to.

For the most part, a hedgehog is not a viable or legal pet for your average Californian resident.

Why Are Hedgehogs Illegal In California?

Hedgehogs are illegal to own in California for two primary reasons: to safeguard local habitats/ecosystems and to protect the animal itself.

Hedgehogs are not native to California and thus have no natural predators.

For this reason, if a hedgehog were able to get into the wild, they would have a significant impact on the ecosystem and all plants and animals within it.

With few natural predators, hedgehogs would likely increase in numbers exponentially, and this could throw off and disturb other species of animals, even causing them to become endangered.

At the same time, hedgehogs are known to be quite invasive. Consuming many different types of insects, and sometimes even lizards.

If hedgehogs were to be released into the wild, it would have quite a bit of impact.

And while we are talking about keeping hedgehogs as pets, it’s important to note that there is always the risk.

A hedgehog is released unintentionally or via an escape.

It can, and it does happen.

And it is not a risk the state is willing to take.

So they have unequivocally banned hedgehogs and other exotic pets.

Rightly or wrongly – the reality remains the same.

What Happens If You Get Caught With A Hedgehog In California?

If you were to own a hedgehog in California and get caught, you would likely receive a civil fine, be subject to criminal prosecution, and your hedgehog would be confiscated and taken away.

Regarding the civil fine; this could be in the vicinity of anywhere between $500,$10,000 subject to the severity of the case. You could even be charged for some of the state’s incurred costs – such as the removal and care of the animal.

There is also the possibility of criminal prosecution on the grounds of a misdemeanor too. This can include several months in jail and other related fines.

So, there are certainly consequences to owning a hedgehog illegally in California.

Unless, of course, you own the right via a permit.

One other thing to consider here is the fate of the hedgehog itself.

Hedgehogs are not native, which means that they would not be released back into the wild.

And unless the authorities could safely rehome them out of state, which is unlikely, then chances are the hedgehog will be euthanized.

It’s sad, but it is the reality.

And hence, owning a hedgehog in California really isn’t wise.

Nonetheless, just consider that your fate can be decided by a wide range of different institutions.

From local law enforcement, city or town police departments, the county sheriff’s office, the state department of fish and wildlife, or the U.S. Fish and Wildlife Service.

Other States Hedgehogs Are Illegal

Beyond California, it is also illegal to own a hedgehog in Georgia, Hawaii, Omaha, Nebraska, Washington D.C., and the five boroughs of New York City.

It is also important to note that some other states and cities may have certain restrictions on hedgehog ownership or require a specific permit that allows the ownership of one.

For instance, New Jersey and Wisconsin are states that are known to require such permits and/or a certificate of veterinary inspection.

What States Can You Legally Own A Hedgehog?

It is legal to own a hedgehog in all of New England and most of the United States. Consider that New England comprises the following six states (Connecticut, Maine, Massachusetts, New Hampshire, Rhode Island, and Vermont).

At the same time, it’s important to note that some states have recently legalized the ownership of hedgehogs as pets. This includes Arizona, Maine, and Wyoming.

While it is extremely unlikely that California will follow suit and ease restrictions and laws, it is something to consider if you were to relocate or move across states at any point in the future.

Hedgehogs might appear entirely cute and innocent, but if they are released into the wild – they can have far-reaching implications.

And for this reason, California has imposed strict laws on ownership.

So much so that owning a pet hedgehog in California is unlikely ever going to be a real possibility.

While it may be possible to do so, just consider this: you will be breaking the law.

And the repercussions of illegal ownership can be severe.

On you, your hedgehog, your local ecosystems, and to the broader environment.

The truth is, as a Californian resident, finding and getting a new pet is not all that easy.

That is if you are looking for something a little out of the ordinary.

Any ‘exotic pet’ – one that is considered rare or unusual to keep or is classically associated with being a wild animal – is probably illegal to keep.

In fact, it is strongly advised that you do your research on all the animals it is illegal to keep as pets in this particular state.

And start with the California Department of Fish and Wildlife.

They have an excellent resource on restricted pet species. It includes the likes of sugar gliders too.

Ultimately, be sure you are making an informed and mindful decision on your next pet.