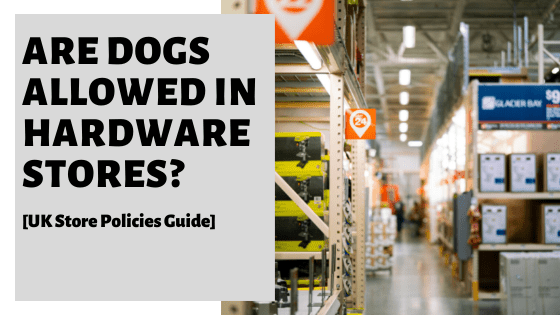 Do you need to get some hardware supplies? Are you wondering whether the major and large UK hardware stores will allow you to bring your dog in with you? Maybe you want the extra company, perhaps your dog is already with you and you don’t want to leave them in the car, or van.

Either way, I decided to call up a few UK hardware stores and do some research to find out about each store’s company policies relating to dog admittance.

You’ll find exactly what they advised me below.

Are Dogs Allowed In Wickes?

All dogs are allowed in Wickes. They do not have any specific policy preventing you from visiting with your dog.

Are Dogs Allowed In Screwfix?

Some Screwfix stores allow dogs, but not all. Ultimately it is down to the store/manager’s discretion to allow dogs. The only exception is assistance dogs which are allowed entry in all stores as per UK law.

sorry to read this. It is down to the managers discretion to allow dogs other than assistance dogs into store. Sorry Elly

Are Dogs Allowed In B&Q?

Dogs are generally not allowed in B&Q stores. The only exception to this company-wide policy is guide and assistance dogs which are allowed entry in all stores as per UK law.

Are Dogs Allowed In Homebase?

Some Homebase stores allow dogs, so long as they are on a leash, but not all. Although most Homebase stores will have a sign-up on the door stating you cannot bring dogs inside. Ultimately it is down to the store manager’s/staffs discretion. The only exception is assistance dogs which are allowed entry in all stores as per UK law.

Are Dogs Allowed In Robert Dyas?

Are Dogs Allowed In Toolstation?

The only way to know for sure is to contact your local Toolstation and ask.

A lovely representative called Lorraine confirmed this to me via LiveChat:

As you can see, it’s a bit of a mixed bag when it comes to hardware stores allowing dogs.

So my advice would be… Call ahead.

And not just the company headquarters. The exact store you are willing to go to.

That way you’ll know whether it’s even worth stopping.

Besides, it’s generally not a good idea to leave your dog in the car/van.

And nobody likes a wasted journey!

Wondering where else you may be able to take your dog inside? Then check out my other guides below: